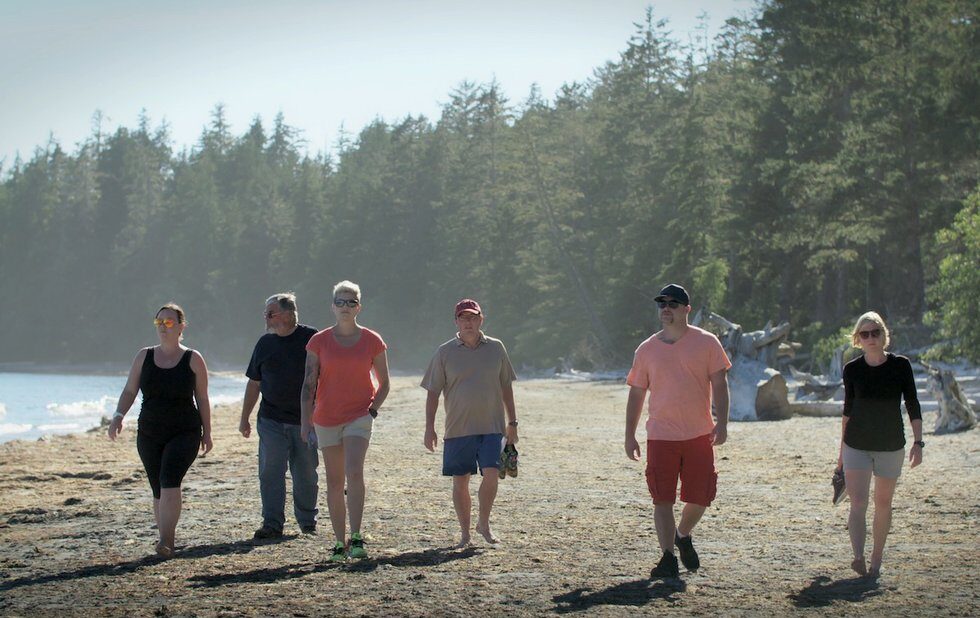 “What do people really think of Indigenous Canadians?” seems like a reductive question, a set-up for a slew of ignorant remarks, a dashing of any hope of reconciliation between Canada and Indigenous people. Reconciliation requires that we, settlers on Turtle Island, listen rather than speak. And yet this is the line that opens APTN’s docu-series First Contact, narrated by George Stroumboulopoulos.

This three-part show aims to confront stereotypes about Indigenous people by following six white Canadians on a journey into First Nations communities. Over 28 days, three men and three women from different parts of Canada meet Indigenous people from various walks of life and experience aspects of Indigenous culture, both beautiful and challenging.

What sometimes feels like show-and-tell – visits to people’s homes, supermarkets, a pow wow, hunting and fishing trips – also had me wondering, “Are these actors?’ because of the visitors’ ignorant remarks and the patience of the Indigenous hosts.

But I had to remind myself that I live in a bubble full of Canadians who are informed on colonization and its effects, and that this group of six people who don’t hesitate to describe Indigenous people as “addicts,” “angry at white people” and “wild” – or make other insults about how they’re a drain on taxes – is more representative of the ideas many Canadians hold about the first people on this land.

Though First Contact is a contrived television show, it will perhaps be as eye-opening for some as it was for the four younger participants. Meanwhile, the denial and resistance demonstrated by the two older men was eye-opening for me.

The group of strangers meet in Winnipeg’s north end and then head to Treaty 1 territory, Métis nation for the first couple of days. They continue to move through Kimmirut, an Inuit community Muskrat Dam, a fly-in reserve in Northern Ontario and Alberta’s Maskwacis, with a population of 17,000 and a reputation for crime and high suicide rates.

The final days of their journey take them to Calgary, Edmonton and Ahousaht First Nation, on the west coast of Vancouver Island. Each stop is an opportunity to meet with Indigenous activists, elders, youth, experts on issues affecting Indigenous communities and some of the organizations supporting communities, like Bear Clan Patrol and Drag the Red. They also attend one of the largest pow wows in North America.

The most important aspect of First Contact is how in three 44-minute episodes significant issues are addressed: missing and murdered Indigenous women, poverty, homelessness, addiction, food instability, living off the land, hunting and sharing economies, and the overrepresentation of Indigenous people in the prison population.

The conversation keeps coming back to the intergenerational trauma caused by the residential school system and cultural genocide. One of the most informative conversations is about what the treaties states and how Indigenous people receive funding – it’s not from tax dollars.

The show makes a convincing case that Canadians need to pay more attention, demand change and help find solutions. But the dramatic shift in attitude that four of the six white visitors is not convincing at all, which had me wondering if the show is scripted. Ultimately, First Contact is about the visitors’ personal journeys and changes in attitude. And because I found them to be unbelievable, I could not invest in them or their journeys.