It's wonderful to see a butch dyke succeed in comedy, but Douglas is a maddeningly inconsistent stand-up special 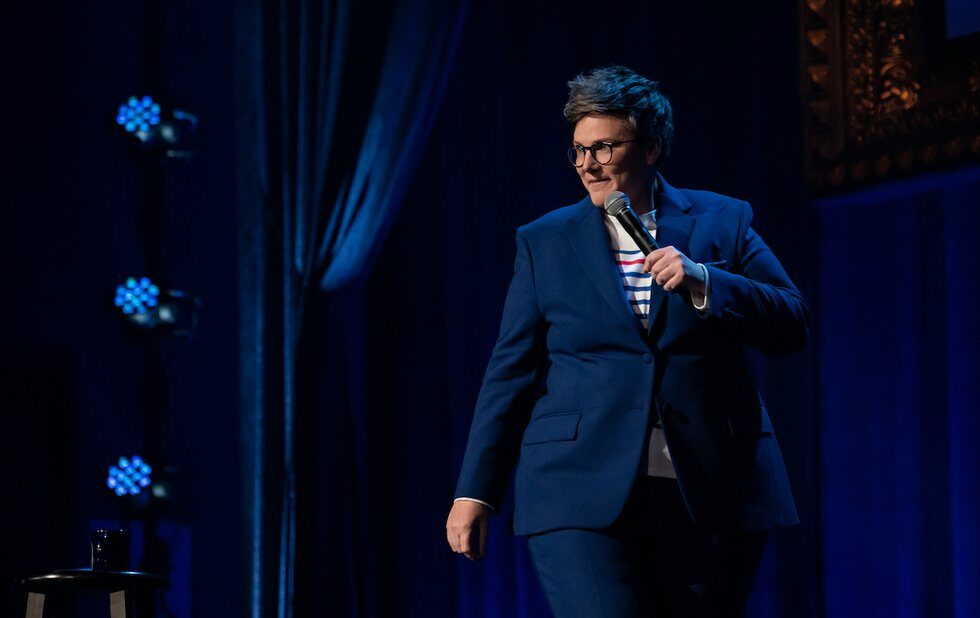 There’s something thrilling about watching an unabashedly butch lesbian do her comic thing, even when it’s not always flat-out comedy. There are so few proud butchy types breaking through in meaningful ways. Lesbian comics? Sure, especially in Canada – all hail groundbreakers Maggie Cassella and Elvira Kurt. But the great Lea DeLaria – who hit Toronto often at Buddies with her incendiary shows – is one of the few proud butches who made a name for herself in the mainstream, and that happened only thanks to her terrific turn in the Netflix series Orange Is The New Black.

So no wonder Hannah Gadsby is a sensation. She not only gets up there in her jacket and tie sending up anti-vaxxers, she has a ton of feminist material and has no problem deploying the word patriarchy – not exactly a term that’s known for causing a laugh riot.

Too bad her new Netflix show Douglas, the follow-up to her hit Nanette, is maddeningly inconsistent.

It begins with her asking the adoring audience why they’ve come – weird – but then segues to a strikingly original piece in which she outlines exactly how her show is about to unfold. It’s a brilliant strategy designed to prepare everyone and it becomes even more clever as the presentation progresses, when you grasp what she was referring to at the top.

The strongest material is her rant about how men have been the ones who get to name things. The show’s title Douglas is a reference not only to the name of her dog but to a part of the female anatomy. But some of the feminist material feels a little old – especially her analysis of classical art pieces, complete with slide show. Her bit on how confused she was about the word fanny, until she found out it refers to something different outside of Australia from what it means in her home country works well. But “petrol” in Australia, as distinct from “gas” in the U.S.? Definitely a joke that’s reaching.

Gadsby is a happy hate-baiter when it comes to men and is clear that she doesn’t really care if it’s funny. That’s not necessarily a problem per se – a few pokes at male behaviour can be bracing – but a lot of the anti-male material strikes me as border-line essentialist, even if it plainly delights audience members who doubtless have never heard such things coming out of a comic’s mouth.

Yes, I know that Gadsby considers herself more than a comic and that Nanette was never intended to be a stand-up routine. She’s declared outright that the jokes at the beginning of her first show are not the point, intended as they are to open up viewers to the more serious content about autism and the essential problems stand-up comedy present to a female performer.

And anyway, in Douglas, she often uses rage rather than humour to make her point – especially in the material aimed from her perspective as a person with autism at anti-vaxxers or elsewhere at a foolish guy who tried to talk her up at the dog park.

Some of the anger seems strangely directed. A lengthy piece on the kids’ book series Where’s Waldo? is designed to make Waldo out as an entitled male who can be judged as either wrong or silly – and it’s not funny. A sequence in which she promises to critique Americans starts out well enough, referring to Yanks as the “white men of culture,” but the bit needs more teeth. She’s fearless in many ways but often backs down just as she’s about to deal the final blow.

Having seen Gadsby’s live stage show, I give credit to the TV special’s editors for some judicious cuts. A long and bewildering take-down of Taylor Swift – couldn’t she have found someone totally awful to trash? – has thankfully been eliminated. So has much of the “Fuck you” material delivered at a high-pitch shriek, which was painful even for those of us not targeted and was more suitable for a club gig than a soft-seat show, whose tickets went for over $100.

But I missed the great section on how, in the wake of Nanette’s surprise success, her new handlers tried to change her image, her clothes, her hair and just about everything else. That kind of material not only resonates with women who feel enormous pressure to conform to western culture’s ludicrous standards of beauty, it was very funny in a show that lacked full-on hilarity.

Since Nanette, Gadsby’s performance chops, especially her timing, have improved and she can raise her eyebrows to great effect. But, neither the live event, nor the Netflix special that came out of it constitutes the holy-shit-wow follow-up you’d hope for.

Of course, it’s hard being the only (successful) feminist butch lesbian comic out there. (By the way, I use the term lesbian comic loosely here. Except for a throwaway joke about women’s hands, there’s almost no lesbian content in Douglas.) We want her to be perfect, and that’s not possible.

Then again, let’s not set the bar too low.