Up in hot air

Anyone wondering why there aren't any decent female roles in movies these days need only consider Up In The Air.. 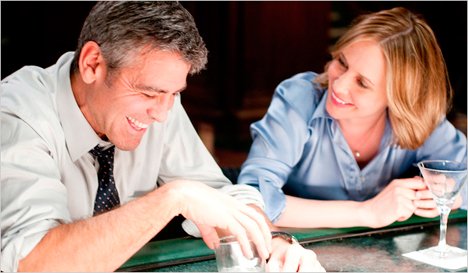 Anyone wondering why there aren’t any decent female roles in movies these days need only consider Up In The Air. It gives us the answer: bad writing.

Director/screenwriter Jason Reitman and his co-writer Sheldon Turner have created two female characters that aren’t believable for a nanosecond. Alex, played by Vera Farmiga is a cold, lying creature born out of a male nightmare fantasy. Natalie, played by Anna Kendrick, is a cold, heartless downsizer, so completely a caricature as to be ridiculous.

In an interview with NOW’s Norman Wilner, Kendrick talks about Natalie, describing her as incredible, smart and strong and that that has nothing to do with a man being opposite her . She seems to have forgotten the post-break-up breakdown that’s supposed to make us sympathize with her but just makes her look silly.

The two women are designed to be opposite sides of the same coin – especially when Natalie tries to persuade Alex that a love commitment can be a good thing – but they’re both absolutely two-dimensional in what’s supposed to be a three-dimensional story that captures the economic zeitgeist.

Contrast that with the two opposing male characters in Nancy Meyers’s It’s Complicated. Alec Baldwin, as the burly and unstoppable Jake, is the bull, and the world – and his ex-wife Jane’s house – is his china shop. Steve Martin is the mild-mannered and sensitive architect trying to get into Jane’s life. It’s Complicated has all kinds of problems, but at least, these two male characters fit the comic tone – broad, broad, broad.

Up In The Air is billed as a savvy satire, suggesting some nuance, which makes the two two-dimensional women wrong, wrong, wrong.

Not that Clooney’s character Ryan Bingham, the corporate downsizing hired gun, is written with that much mnore complexity. It’s hard to care about someone whose world is falling about when we know so little about him. How did he become so empty? Who messed him up?

And why would a guy who’s paid to fire people and disappear suddenly get so touchy feely about the process. You’d think that when Natalie proposes axing workers via the Internet, he’d think that was a brilliant idea. Instead, he has Natalie shadowing him so he can demonstrate his human touch. Huh?

True, there’s lazy writing all over holiday movies this year. Invictus, written precisely to the sports pic formula – right up to the slo-mo crucial play – fails to give us the key info that allows us to follow the game. The film has an easy opportunity to teach us when the team we’re rooting for heads out by bus to coach the kids in small villages.

The players duly explain that you can only pass laterally or backward. Why not just add that five points are awarded for carrying the ball into the opponents’ goal area, two points for conversion kick and three points each for penalty kick or drop kick? Then I’d know what was at stake when the ball’s kicked and heading for the goalposts.

But Up In The Air bugs me a lot more, if only because it’s getting such an outrageously free critical ride. Must be the Geroge Clooney factor. Just put him on screen and everybody stops thinking .[rssbreak]