Reviews of the latest movies by Sofia Coppola, Brandon Cronenberg and Kirsten Johnson. Plus: Everything new to VOD and streaming platforms 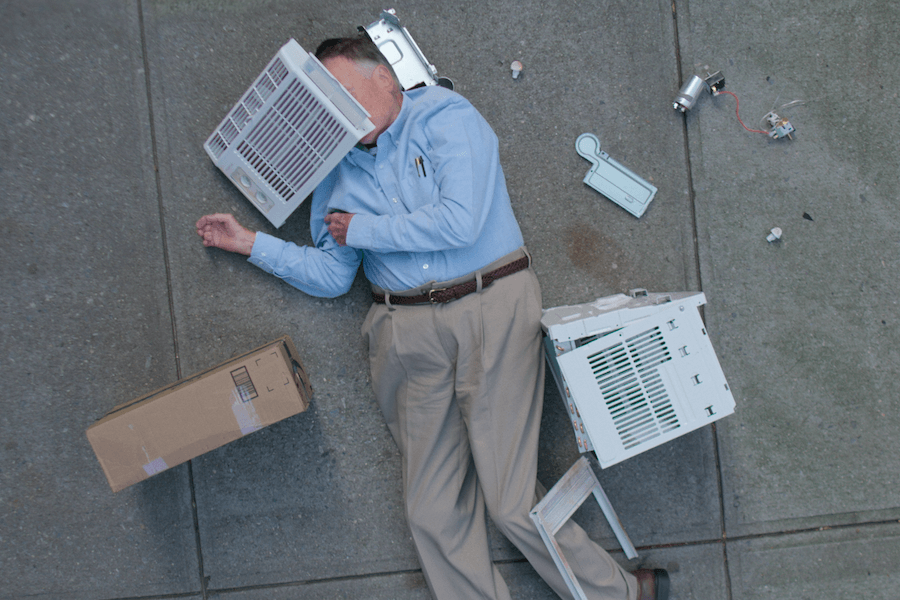 NOW critics pick what’s new to streaming and theatres for the weekend of October 2. Plus: Everything new to VOD and streaming platforms.

Cinematographer Johnson follows her brilliant 2016 docu-memoir Cameraperson with another thoughtful, structurally ingenious look at her life and family. This one focuses on her relationship with her father Dick, who’s recently been diagnosed with dementia – and who enthusiastically helps Kirsten imagine his own death (and afterlife) with little movie shoots that let dad and daughter deal with the impending loss in alternately absurd and heartbreaking ways. Johnson also tweaks with the documentary form itself, not always letting us know how real a given moment might be… though Dick is a terrible actor, so that’s kind of a tell.

Somehow reminiscent of both Joshua Oppenheimer’s The Act Of Killing and Hirokazu Kore-eda’s After Life, Dick Johnson Is Dead manages to be charming and crushing in equal measure: set aside the impressive artistic accomplishment and it’s a story about a daughter finding a way to give her father the chance to go out on his own terms, even though – having lost Kirsten’s mother to Alzheimer’s a decade earlier – they’re all too familiar with what’s really coming. Available to stream on Netflix Friday (October 2). NNNNN (Norman Wilner)

Writer/director Coppola’s latest – which is getting a short theatrical run before coming to Apple TV+ later this month – is her most casual film to date, a loose dramedy about a New York writer and mom Laura (Rashida Jones) whose louche father Felix (Bill Murray) stokes her suspicions that her husband (Marlon Wayans) is cheating on her. It’s the sort of movie Woody Allen used to make, in that a lot of it takes place in very nice lofts and restaurants around Manhattan, with neurotic people trading references to artists and authors – and Coppola similarly seems oblivious to the wealth and privilege her characters enjoy.

But she does care about them as human beings, and Jones and Murray make us care about them too, building a lovely relationship as two people who understand each other more fully than anyone else ever will – which isn’t necessarily a good thing. Jones’s measured frustration offers a good counterweight to Murray’s intentionally larger-than-life performance, puncturing Felix’s façade before she ever speaks a word. The plot just sort of evaporates, which is a little frustrating, but the moments of clarity between Felix and Laura have a pleasant way of hanging around. In theatres Friday (October 2) and streaming on Apple TV+ October 23. NNN (NW)

Brandon Cronenberg’s Possessor is about an assassin who can inhabit the body of another person.

Cronenberg’s follow-up to his 2012 debut Antiviral plumbs similar territory, putting a sci-fi body-horror spin on a tale of corporate espionage. This one’s set in a world (specifically Toronto) where technology allows assassin Vos (Andrea Riseborough) to inhabit the body of another person in order to do her dirty work, leaving both her victims and vessel dead to tie up all loose ends. But her latest gig goes sideways, leaving her fighting for control of Colin Tate (Christopher Abbott), whom she’s just used to murder a magnate (Sean Bean). Riseborough and Abbott are both fascinating here – Abbott, who has to play a mixture of both characters, oscillates between panicked confusion and steely focus in way that lets us know who’s steering Colin’s body at any given moment, while Riseborough sets up Vos as someone who’s hollowed herself out to allow for easier transfers, because there’s less baggage that way. Also very good, in smaller roles, are Rossif Sutherland as Vos’s ex-husband, Tuppence Middleton as Colin’s girlfriend and Jennifer Jason Leigh as Vos’s gimlet-eyed handler – though the latter’s presence means we’re constantly reminded of eXistenZ, the oddly similar virtual-reality thriller written and directed by the filmmaker’s father David, and one that didn’t constantly risk derailing itself with impressionistic stylistic flourishes the way Possessor does. In theatres Friday (October 2). NNN (NW)

Danny Flaherty, Eddie Redmayne, Jeremy Strong and Mark Rylance take a stand in The Trial Of The Chicago 7.

Writer/director/polemicist Sorkin follows the diverting if weirdly self-important Molly’s Game with another story about free thinkers persecuted by a government bent on making an example out of them. Here, it’s the assortment of radicals who were charged by Nixon’s justice department with conspiracy to incite a riot at the 1968 Democratic National Convention in Chicago – even though the outgoing administration had concluded that the police had started the violence. Sorkin structures the narrative as an all-star debate about the future of the American left as represented by SDS leaders Tom Hayden (Eddie Redmayne) and Rennie Davis (Alex Sharp), Yippies Abbie Hoffman (Sacha Baron Cohen) and Jerry Ruben (Jeremy Strong), pacifist David Dellinger (John Carroll Lynch) and Black Panther Bobby Seale (Yahya Abdul-Mateen II), while lawyer William Kunstler (Marc Rylance) clashes with laser-focused prosecutor Richard Schultz (Joseph Gordon-Levitt) and combative judge Julius Hoffman (Frank Langella).

It’s all arguing all the time, which plays to Sorkin’s strengths as a writer, though his directorial chops are still undeveloped. And he doesn’t have much of a point, which left me wondering how this would have turned out had producer Steven Spielberg followed through with his initial plan to direct it. But you can appreciate the work the actors do to make their characters more than types, like the streak of nobility Strong finds in Ruben, the steadying calm Lynch gives Dellinger and the entirely understandable rage Abdul-Mateen makes sure to keep burning behind Seale’s eyes. In theatres Friday (October 2) and streaming on Netflix October 23. NNN (NW)

Brooklyn couple Su (Sunita Mani) and Jack (John Reynolds) decide to unplug their devices and reconnect with one another at a friend’s cabin upstate – meaning they’re entirely oblivious to the alien invasion unfolding around them. The latest in an intriguing new wave of lo-fi apocalypse pictures that probably started with Todd Berger’s It’s A Disaster, Save Yourselves! doesn’t vary too much from the formula of self-absorbed characters gradually discovering they can’t keep putting off an increasingly grim reality, though this one remains first and foremost a comedy, with a modest on-screen body count and an extraterrestrial menace that’s almost adorable. (Until it kills you, of course.)

GLOW’s Mani and Search Party’s Reynolds are nicely suited to one another, finding fun ways to incorporate their characters’ separate but complementary neuroses into the flow of the story while also storing up irritations and revelations for just the right moment: Mani’s timing on Su’s darkest secret delivered the biggest laugh I’ve had in months. And while writer/directors Fischer and Wilson don’t quite stick the landing, they do end on a final image of eerie, ambiguous beauty. In theatres Friday (October 2). NNNN (NW)

Two strangers (Aya Cash and writer/director Ruben) pass a stormy night in a remote cabin trading scary stories in this fun little indie, and if the premise sounds a little creaky that’s exactly the point:Scare Me is about the way people use clichés as a jumping-off point for their own ideas, and how creativity comes from one’s experience and point of view. Mostly, though, it’s about the fun of yes-anding something, as Ruben’s Fred and Cash’s Fanny act out their little horror nuggets, swapping ideas and critiques as they go. The stories are “illustrated” with sound effects and camerawork more than anything else; most of Scare Me is simply the two leads performing for one another, with the remarkable Cash – fresh from stealing the second season of Amazon’s The Boys – having a marvelous time as the versatile, committed Fanny. Ruben is a little weaker as Fred, but that seems deliberate; the character’s entitlement is a limitation in a number of ways, as Fanny repeatedly observes, and watching Fred gradually create a situation in which he can genuinely terrify his scene partner gives Scare Me the ugly streak it needs to qualify as a proper horror movie… and Ruben knows it, even if his character doesn’t. Now streaming on Shudder. NNNN (NW)

Save for a couple of drive-in screenings, the 30th edition of Canada’s largest showcase of LGBTQ+ cinema is an online affair this year (like every other film festival), but that just means you have near-unlimited access to down with dozens of queer-themed features, documentaries and shorts – including these five recommended titles. October 1 – 11, online at insideout.ca

A collaboration of seven South Asian festivals around the globe, including Mississauga’s own Mosaic festival, this online event offers free screenings of features, short films and web projects, many followed by pre-recorded filmmaker Q&As. The festival also boasts a number of industry panels, including a conversation about streaming (Thursday October 8, 12  pm) with Richie Mehta (Netflix’s Delhi Crime) and Smriti Mundhra (producer of the the Oscar-nominated documentary short St. Louis Superman) among the participants. October 3-17, online at tasveer.org/cosaff

The annual celebration of commercial Japanese cinema offers its usual wide range of dramas, comedies and thrillers – among them Haruhiko Arai’s It Feels So Good, a drama about a couple (Tasuku Emoto, Kumi Takiuchi) who embark on an obsessive affair, Kiyoshi Kurosawa’s surrealistic dramedy To The Ends Of The Earth and Isshin Inudo’s gender-swapped Japanese remake of the Jack Nicholson-Morgan Freeman comedy The Bucket List. All titles are available to stream for the entirety of the festival. October 3-22, online at jccc.on.ca/tjff/

A Million Ways To Die In The West (Crave)

Sex And The City (Crave)

Vampires vs. The Bronx (Netflix Canada)

You’ve Got This (Netflix Canada)

David Attenborough: A Life On Our Planet (Netflix Canada)

If you’re planning to binge on horror movies this October, Paramount’s latest catalogue collection will keep you busy for a weekend or two, boxing up the 1991 and 2019 versions of Pet Sematary, Mick Garris’s epic 1994 miniseries of The Stand (six hours on one disc!), the very goofy Corey Haim-Gary Busey 1985 werewolf thriller Silver Bullet.

And, for the first time in HD in North America, David Cronenberg’s 1983 film of The Dead Zone, which is the reason this set is worthy of note. Cronenberg’s film, which stars Christopher Walken as a schoolteacher who emerges from a five-year coma with psychic abilities that ruin his life but put him in a position to save the world, remains one of the finest screen adaptations of King’s work, with terrific performances and a wintry aesthetic that mutes the story’s more sensationalistic elements and brings its tragedy more fully into focus.

While it’s a definite step up from the standard-definition DVD, this release feels like an afterthought: the video mastering is rougher than it could have been and none of the extras from the studio’s earlier DVD release have been carried over. That said, the DTS-HD audio is excellent, making the most of the shifts between subtle and shocking in Michael Kamen’s score – and the movie feels even more prophetic now that we’re living in a world filled with Greg Stillsons. Even in this less than ideal presentation, The Dead Zone remains essential viewing.

VOD What To Stream