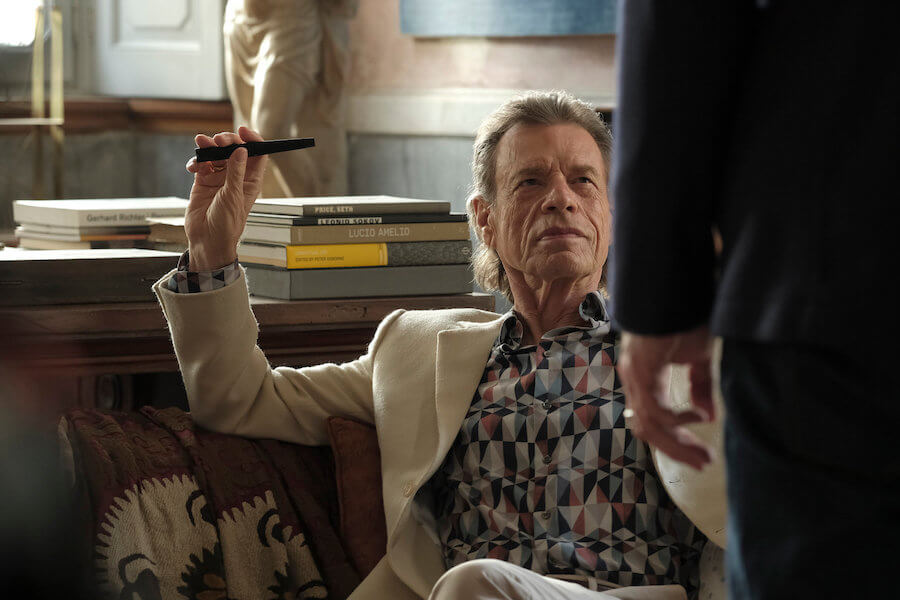 NOW critics pick what to watch online and in theatres for the weekend of August 7. Plus: Everything new to VOD platforms.

With its gorgeous European vistas, international cast, languorous pacing and tasteful dashes of nudity and violence, The Burnt Orange Heresy feels like one of the dozens of Miramax imports that clogged art house cinemas in the late 90s and early 00s. Althought it’s adapted by Scott B. Smith (A Simple Plan) from a novel by Charles Willeford (who wrote Miami Blues and New Hope For The Dead), The Burnt Orange Heresy somehow plays like warmed-over Patricia Highsmith. Claes Bang (The Square) plays James Figueras, an art critic enlisted by a collector (Mick Jagger) to interview reclusive legend Jerome Debney (Donald Sutherland) and perhaps procure one of his paintings. Figueras brings along his new girlfriend (Elizabeth Debicki), who seems far too worldly to be a schoolteacher from Duluth; Debney takes a shine to her as well.

And then things get complicated. It’s all very pretty, and Capotondi’s languid scenes of beautiful people having conversations about the nature of art and truth will let people come away thinking they’ve seen something deep. Festival-goers of a certain age, though, will recognize the safe, middling formula right away, and wonder why anybody who isn’t Harvey Weinstein would think we need another one. Some subtitles. 98 min. In theatres Friday (August 7). NN (NW)

In 1919, Brooklyn pickle-factory worker Herschel Greenbaum (Seth Rogen) falls into a brining barrel, where he lies perfectly preserved for a century – resurfacing 100 years later to a very different world, with his great-grandson Ben (also Rogen) his only surviving family. Building a generational fish-out-of-water tale from his 2013 short story Sell Out, screenwriter Simon Rich mixes some fun commentary on hipster America’s obsession with artisanal frippery and social-media meltdowns into a deeper, sadder story about loss and faith.

Fans of Rich’s Man Seeking Woman will recognize the very specific way the emotionally complex material is constantly interrupted by absurd flights of fancy, and how the plotting sometimes scrambles to incorporate each new notion that zips past. And while I would not have thought Rogen and magic realism would go well together, the actor/producer takes to the whimsical premise surprisingly well, giving two distinct and fully felt performances as Herschel and Ben, even when the movie moves a little too quickly to really let us savour them. Full review here. Some subtitles. 88 min. Available to stream on Crave Thursday (August 6). NNN (NW)

Documentarian Polsky’s engaging 2014 feature Red Army spun a great yarn out of the Soviet Union’s fanatical pursuit of hockey superiority in the 80s, drawing a beautiful contrast between coach Anatoly Tarasov’s refined, cooperative strategy and the goon-driven tactics of the NHL – which then fell apart when his players defected to the West. This follow-up looks at what happened in the 90s, when a group of Western investors (including Michael J. Fox!) saw a business opportunity in setting up a hockey franchise in post-Soviet Russia, where pretty much anything was possible so long as the right palms were greased.

The documentary is full of culture-clash stories from key players in the venture, among them former Pittsburgh Penguins owner Howard Baldwin and his right-hand-man Steve Warshaw. They arrived in Moscow to find themselves surrounded by gangsters, strippers and a couple of bears, often at the same time. But you get the feeling that this is more of a footnote to the story of Soviet hockey than a stand-alone project, and even at 79 minutes Red Penguins feels pretty padded. Some subtitles. 79 min. Available to rent or purchase on digital and on demand. NNN (NW)

Looking for the latest releases? NOW’s got you covered.

I Used To Go Here

The Secret: Dare To Dream

The Shock Of The Future

Sweetness In The Belly

Waiting For The Barbarians

Things I Do For Money

Valley Of The Gods

VOD What To Stream What to Watch