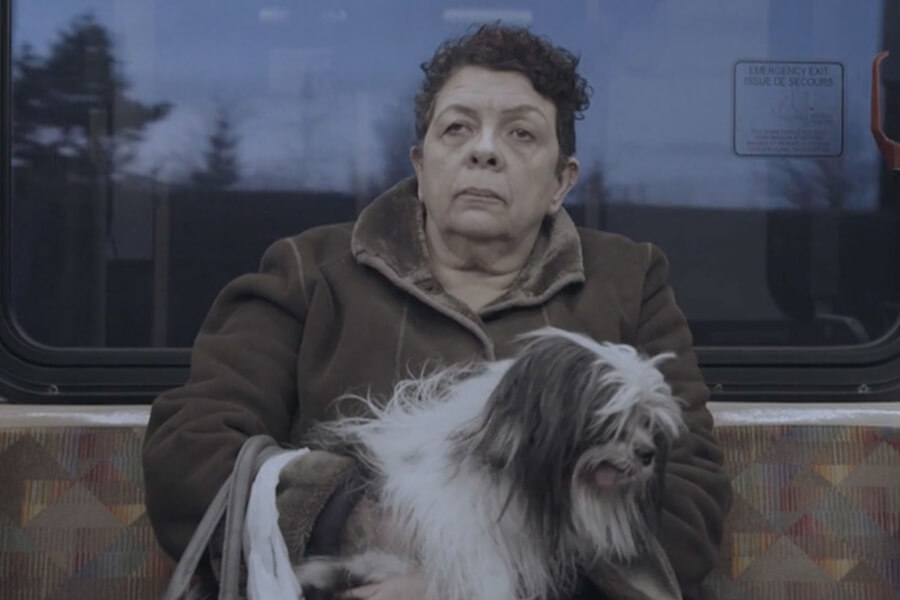 The quietly shattering first feature from East Coast writer/director Young is a character study of an older woman named Donna (Shan MacDonald) spiraling into self-destructive behaviour when she’s given a job at an animal shelter as part of a probationary agreement for an unspecified alcohol-related offence. Donna bonds with a sickly -older dog and decides to bring him home… but one pet isn’t enough.

If you’ve ever had to deal with a sick pet, Murmur will be a rough watch: the film is unflinching in its depiction of animal medicine, weaving footage of actual veterinary surgery into its fictional material – and MacDonald, a non-professional actor making a devastating debut, lets us feel every moment of Donna’s empathy for the creatures in her care. In sharp, spare images and a handful of one-sided conversations, Young shows us the despair her protagonist carries but can’t articulate to anyone who might be able to help. As much about profound loneliness as it is about misguided compassion, Murmur just sits us down with Donna and shows us her heart. 84 min. Available to stream Friday (July 17) on Digital TIFF Bell Lightbox. NNNN (NW)

Pitched somewhere between Bukowski’s earlier, funny work and the final act of Eugene O’Neill’s The Iceman Cometh, this evocative work from the Ross brothers – makers of the artful documentary Tchoupitoulas and the exhilarating concert film Contemporary Color – charts the last day of operations at a Las Vegas dive bar called the Roaring Twenties as bartenders and regulars gather to drink, talk and salute the place.

Except it’s more complicated than that, because the Rosses aren’t exactly making a documentary here. They’ve cast real people to play themselves and interact without a script – and filmed most of the action at a New Orleans bar to guarantee some control over the situation. But the alcohol is real, and so are the emotions that come out over the course of the film, and Bloody Nose, Empty Pockets pulls you into its artfully manufactured unreality with the confidence and grace of a masterful theatre piece. O’Neill’s play was a key influence on the brothers, and they’ve made something that honours it: if you didn’t know this was a construction, you’d swear it was really happening before your eyes. And in a way, it is. Full review here. 98 min. Available to stream Thursday (July 16) at Hot Docs Ted Rogers Virtual Cinema. NNNNN (Norman Wilner)

Toronto filmmakers Lewis and -Thomas (Amy George, The Oxbow Cure) deliver another incisive psychological drama with this study of Katie (Kacey Rohl), a Hamilton college student who’s been faking a cancer diagnosis. White Lie shadows its anti-hero as she races to keep up the deception on every front. It’s a character piece that plays like a thriller, with Katie risking everything – her reputation, her academic career, her relationship with her loving, supportive girlfriend (Amber Anderson) – as she doubles and triples down on the lie.

Lewis and Thomas milk remarkable tension by showing us how many holes in her -story need to be patched before she’s exposed, and Rohl – who’s distinguished herself in Hannibal, The Magicians and Arrow – is riveting as a young woman who’s as much a victim of her compulsions as any of the people she’s defrauding. White Lie doesn’t let Katie off the hook for anything she does, but it also puts us firmly inside her head as she keeps pushing forward, certain that the next bad decision will solve all her problems. It’s the Canadian version of Uncut Gems, and just as queasily watchable. 96 min. Now streaming on Digital TIFF Bell Lightbox, and coming to Apple TV and other digital platforms Tuesday (July 21). NNNN (NW)

The loving new Ultra High Definition masters reveal the strengths and weaknesses of both features: Braveheart remains a gorgeous wallow in its producer/director/star’s signature mixture of sadism, comedy and male rage, while Gladiator still feels like its weaker sibling, surrounding Russell Crowe’s brute-force performance with stilted dramatic callbacks to the spectacle films of the 60s – especially Spartacus and The Fall Of The Roman Empire – on which Scott is determined to draft.

Despite being the newer production, Gladiator also suffers from a reliance on shabby CG that makes the film seem cheap and expensive at the same time. But Braveheart hasn’t aged a day; it’s the movie where Gibson turned his pathology into a rousing work of art, martyring himself for glory and winning five Academy Awards for his trouble.

Supplements for both films are ported over from the previous Blu-ray releases. (NW)