By Kevin Ritchie and Norman Wilner 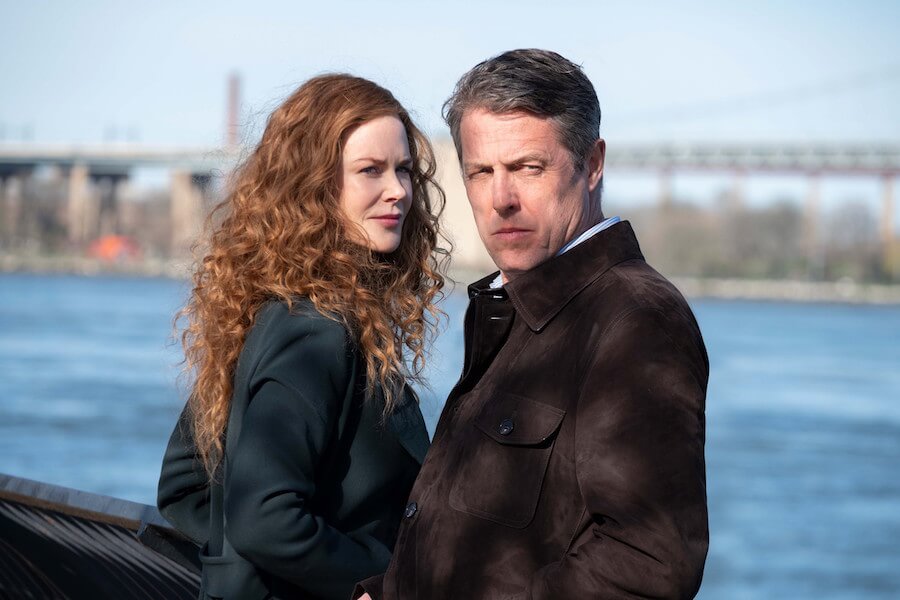 Nicole Kidman (left) and Hugh Grant are under suspicion in The Undoing.

NOW critics pick what’s new to streaming and VOD for the weekend of October 23. Plus: Everything new to VOD and streaming platforms.

Nicole Kidman reteams with Big Little Lies creator Kelley for a Manhattan murder mystery that tries to grapple with class divide, but is more successful at addictive plot twists. Kidman plays Grace, a therapist who is better at summing up her clients’ marital problems than listening to them. Her world turns upside down when Elena (Matilda De Angelis), a sexy lower-income woman that Grace almost makes out with at a swanky private school gala, is bludgeoned to death. Grace’s husband Mike (a well-cast Hugh Grant) promptly vanishes. He is a suspect. Was Grace’s perfect life a lie? The answer is yes, and the ensuing media storm concludes that the wealthy, white and privileged Mike must be guilty. But what does the inscrutable Grace think? Her “undoing” has less to do with self-reflection than grappling with whether Mike is truthful. As she vacillates between trusting him or not over the course of five (of six) episodes sent to critics, The Undoing ratchets up tension, ending each instalment in a tantalizing cliffhanger.

Kelley’s script doesn’t give us enough character development for Grace, and especially not for Elena, to either make this a formidable entry of the classic Hollywood genre of “a woman undone” or elevate its exploration of race and class beyond the superficial. Instead, director Susanne Bier maximizes performances to layer in social tensions in ways that complicate the central mystery, particularly in scenes pitting Kidman and Grant opposite Noma Dumezweni’s defense attorney and Edgar Ramirez’s detective. But in the process, Grace increasingly feels like an audience cipher flung from one revelation to another, oddly growing more distant rather than deepening as a character. Premieres Sunday (October 25) on HBO Canada and streams on Crave. NNN (Kevin Ritchie) 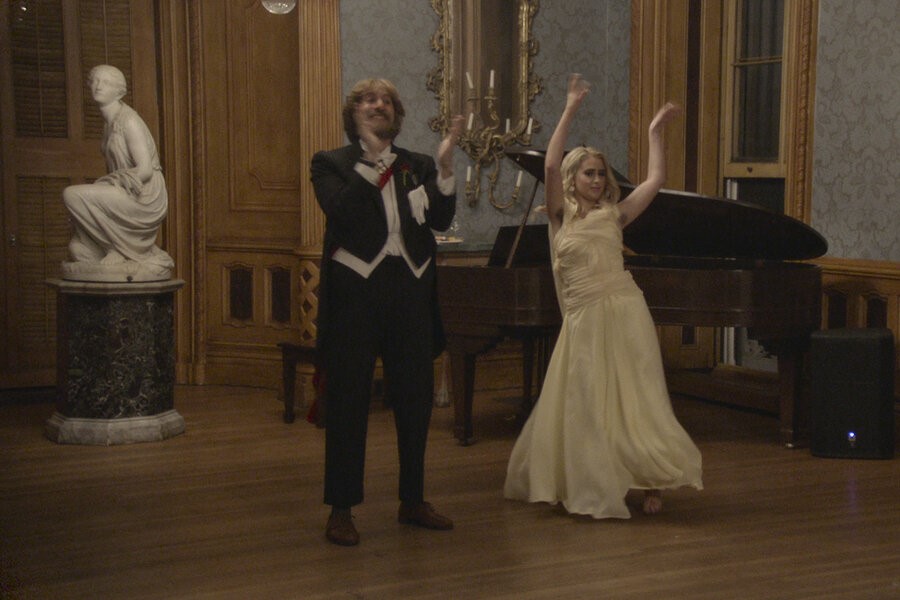 Sacha Baron Cohen’s Kazakh journalist is back for another tour of America, ostensibly to point out the racism and ignorance lurking underneath the myth of freedom and exceptionalism. But in the 14 years since his last visit, America’s a different place. Its worst people no longer feel the need to hide themselves, and the targets the new film wants to hit are painfully obvious. It’s like watching a stand-up comedian pull out old material and insist it’s just as vital as ever.

As Borat’s previously unknown teen daughter Tutar, Bulgarian actor Maria Bakalova commits fully to the monobrowed dull-wittedness that defines the Sagdiyev gene pool, with an energy that gives her equal footing in every scene with Baron Cohen. But all he wants to do is restate the first film’s points – America is a profoundly racist country divided by prejudice and run by wealthy conservatives who pretend to care about the underclass but literally don’t care whether they live or die – over and over. And that’s old news.

Also, certain ghoulish old Republicans will do and say anything for a few minutes of television exposure – up to and including following an attractive young woman into a hotel bedroom. So… points to Baron Cohen for capturing that on video, I guess. Available to stream Friday (October 23) at Amazon Prime Video Friday. NN (Norman Wilner) 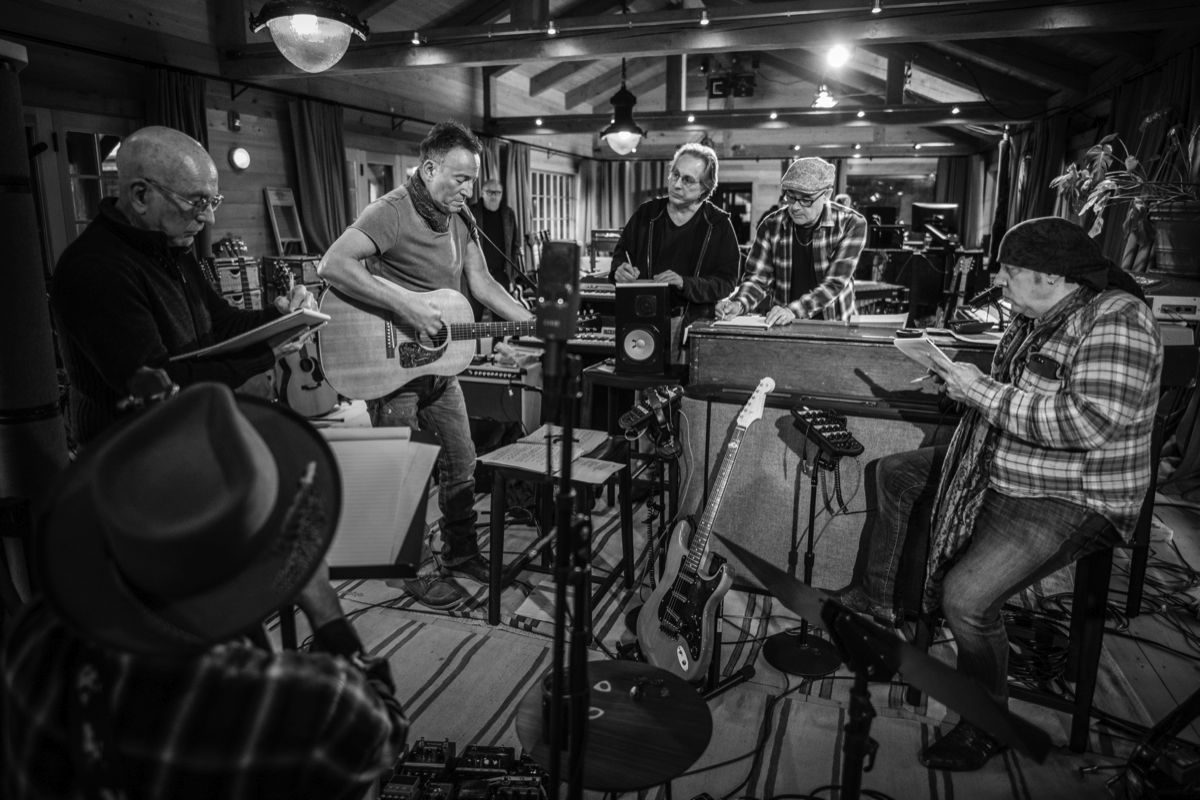 Bruce Springsteen’s Letter To You

Bruce Springsteen’s Letter To You is one of those projects that’s made for the fans: a celebratory documentary, shot in lustrous black and white, about the recording of the eponymous album over four or five days at Springsteen’s remote New Jersey studio. It’s the first time Springsteen and the E Street Band had made an album physically together since 1984’s Born In The U.S.A., and director/editor Zimny – with whom Springsteen collaborated on last year’s Western Stars – shoots it like a party, inviting us to enjoy the band hugging and laughing and toasting each other at the end of every day. It’s not unlike the “video albums” that were spat out by the dozens in the glory days of VHS, when labels realized there was an entirely new revenue stream available if you put a camera in the engineer’s booth.

And if that’s all you’re looking for, bump this rating up by a couple of points. But this casual Springsteen fan was disappointed by the strangely corporate feel: while the Western Stars movie felt like a genuine artistic venture, the Letter To You doc is marketing material, massaged and planed down to be as inoffensive as possible. Now streaming on Apple TV+. NNN (NW) 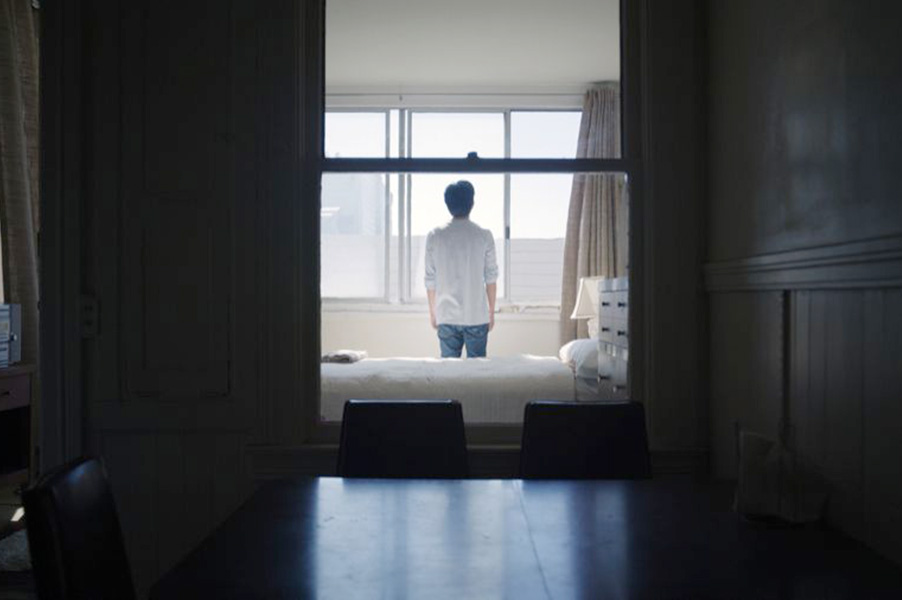 Veteran director Wang (The Joy Luck Club, Smoke, The Center Of The World) adapts Chang-Rae Lee’s essay about losing his mother to cancer into a small, poignant study of filial dedication, difficult relationships and the Korean-American experience. Justin Chon plays Lee, who leaves his job and his relationship in New York to come back to San Francisco when his mother (Jackie Chung) falls ill. The story flashes over the course of her illness as Lee struggles to care for her while processing the impending loss, and deal with his own ambivalence towards his family. Wang’s approach is modest and still, letting us get a sense of the work involved in palliative care and the toll it takes on the caregiver as well as the patient. And Chon carries so much of that stress in his body rather than his voice, capturing an essential truth that anyone who’s lived a version of this situation will immediately recognize. There have been  a lot of movies about terminal illness in the last year – there were about a dozen at TIFF 2019, where Coming Home Again had its premiere – and this is the one that stood out to me for its restraint, its texture and its respect for its characters. Don’t miss it. 86 min. Some subtitles. Available to rent at Vimeo on Demand. NNNN (NW) 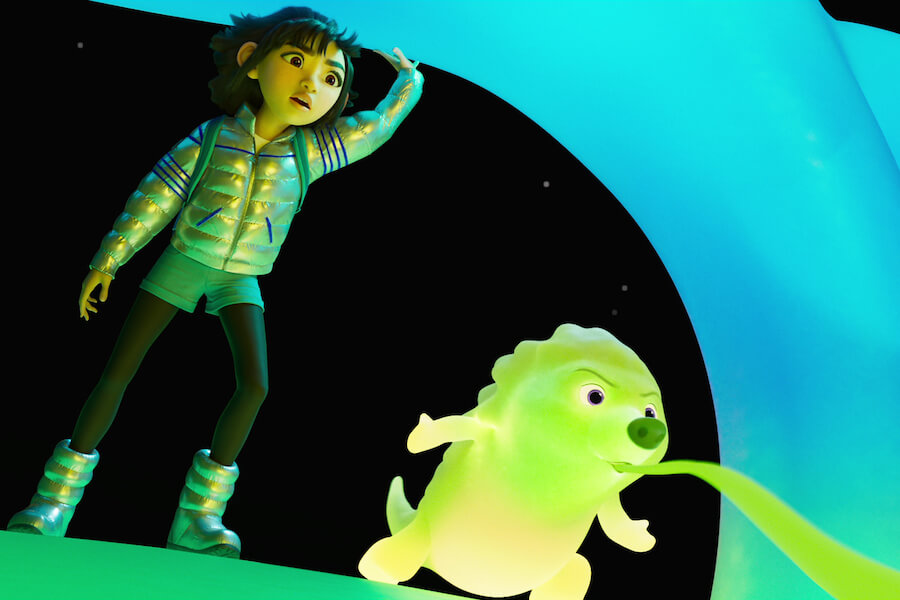 Netflix takes its shot at Disney’s animation domination with this fantasy musical about a young Fei Fei (voiced by Cathy Ang) who reacts to the news of her widowed father’s remarriage by rocketing herself to the moon to meet an immortal goddess (Phillipa Soo) who’ll prove true love lasts beyond death. Two snags: she’s accompanied by her annoying stepbrother Chin (Robert G. Chiu), and both of them get caught up in a race to find the “gift” that said moon goddess demands in exchange for her cooperation. Narratively, it’s a wild jumble of ideas pulled from every successful animated film of the last decade and a half – Up and Frozen are the most obvious points of reference. But visually it’s a stunner, giving Fei Fei’s Earthbound environment a tactile reality and the fantastical world of Lunaria a brilliant, bouncy Day-Glo texture that turns the more rubbery qualities of CG into a proper aesthetic. And after decades of Disney films that revolve around characters with dead parents, it’s almost shocking to see an animated musical that focuses on the grief of such a tragedy rather than pushing past it to tell a bouncy, happy story. Not that there isn’t bouncing, mind you. 95 min. Available to stream on Netflix Friday (October 23). NNNN (NW) 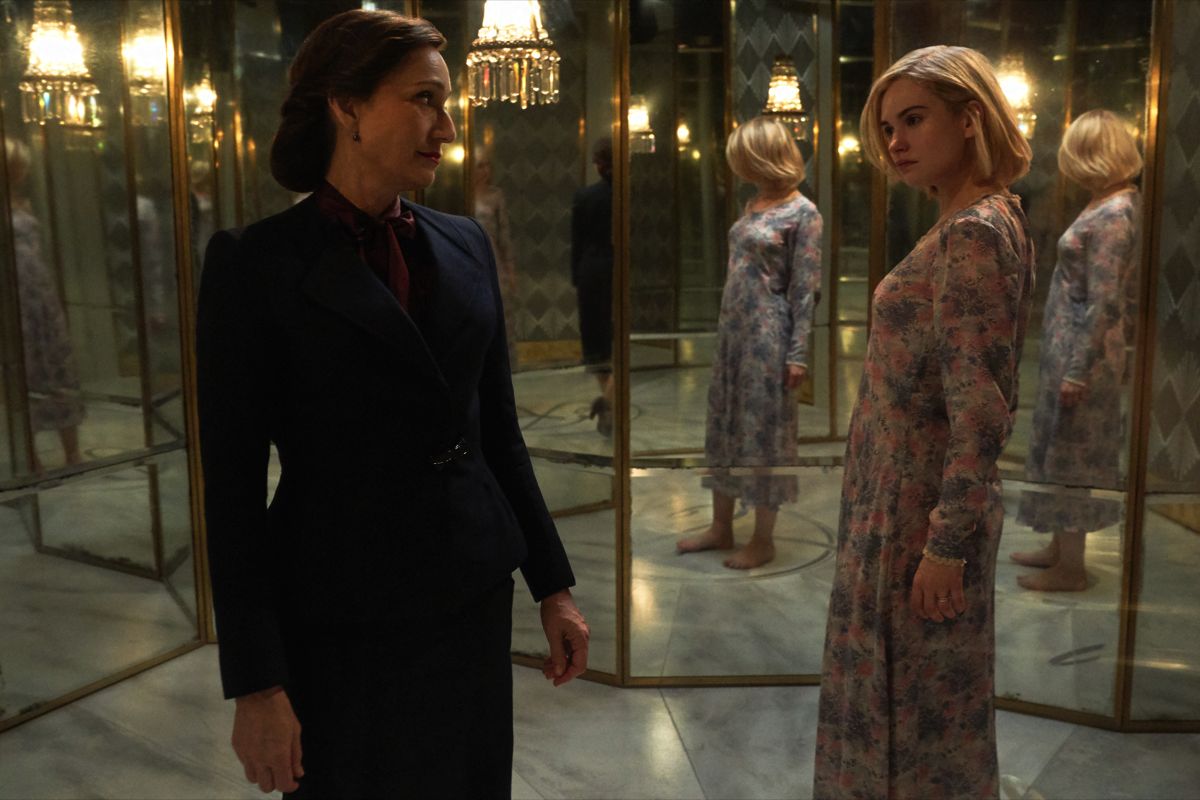 It’s been 80 years since Alfred Hitchcock adapted Daphne du Maurier’s Gothic mystery about a young woman who cannot measure up to the memory of her husband’s deceased first wife – and now here’s a new Rebecca, directed by Ben Wheatley, which ironically cannot help but exist in the shadow of its lustrous predecessor. The metaphor is kind of exquisite, really, daring viewers to be the new Mrs. Danvers, expecting to be disappointed by this younger, fresher model. Nothing can measure up to Rebecca, the person; nothing can measure up to Rebecca, the movie. But as with the second Mrs. de Winter, this Rebecca has the courage to make its own way. Keeping the focus tight on Lily James’s blushing bride – whose marriage to the wealthy Maxim (Armie Hammer) offers her a new standard of living with which she is decidedly uncomfortable – it finds new angles on the story, offering a more contemporary interpretation of the gaslighting going on throughout the narrative. And director Wheatley’s tendency to build towards emotional explosions serves the material well; there’s a sense that someone is always a moment or two away from completely losing it, hinting that all the wealth in the world cannot protect the wealthy from themselves. 122 min. Now streaming on Netflix. NNN (NW)

Over The Moon (Netflix Canada) 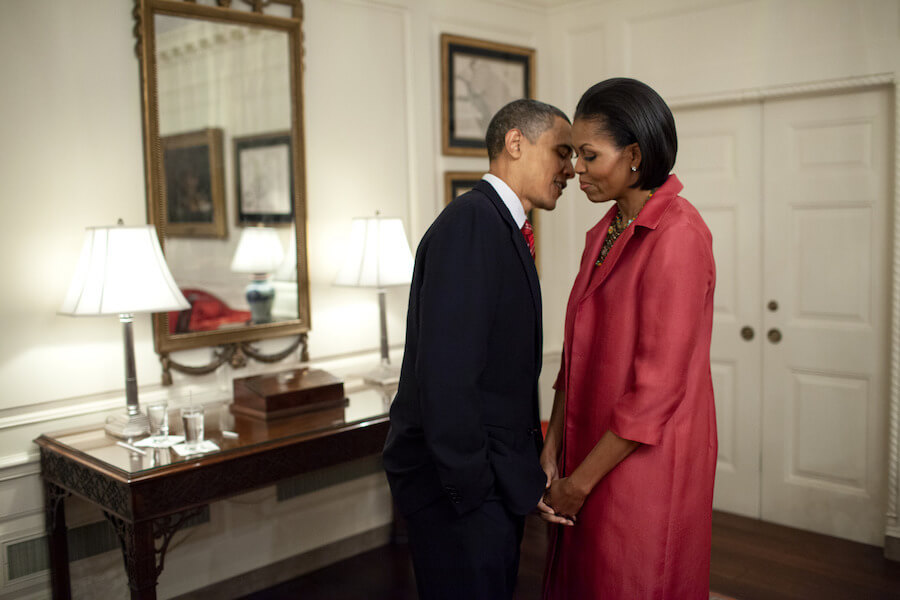 The Curse of Audrey Earnshaw

Oliver Sacks: His Own Life

The Way I See It

The second wave of TJFF 2020 offers a daily selection of features, shorts and documentaries, many with filmmaker Q&As available to stream the next day. Check out our list of recommendations and our interview with Shiva Baby director Emma Seligman! To November 1 at tjff.com

The festival’s 20th edition has cancelled the in-person screenings scheduled for the Paradise Theatre, but its free online component is still going forward, with three programs of shorts focusing on themes of migration in cinema and Latin women in cinema. To November 5 at alucinefestival.com

Claudine and The Hit (Criterion, Blu-ray)

In advance of next week’s extra-special edition of Bong Joon-ho’s Oscar monster Parasite, the boutique label shines some light on two forgotten classics that stretch the boundaries of their specific genres: first, there’s John Berry’s 1974 romantic comedy about a single mother (Diahann Carroll) and a garbage collector (James Earl Jones) trying to forge a lasting relationship in decaying Harlem, and then there’s Stephen Frears’s oddball thriller starring Terence Stamp and Tim Roth as English assassins who arrive in Spain to whack an informant (John Hurt), only to find their target entirely at peace with his impending death. Berry’s film – which earned Carroll her sole Oscar nomination – was revolutionary for folding Black socioeconomic reality into the skin of a romantic comedy, while Frears’s effectively deconstructs the gangster picture into a meditation on fate and character. Both movies are also exceptionally well-acted by their respective casts, boast terrific soundtracks and arrive in new Blu-ray editions that make them look better than they have in years. The comprehensive supplemental packages, much of them produced for previous DVD releases, are just icing on the respective cakes.