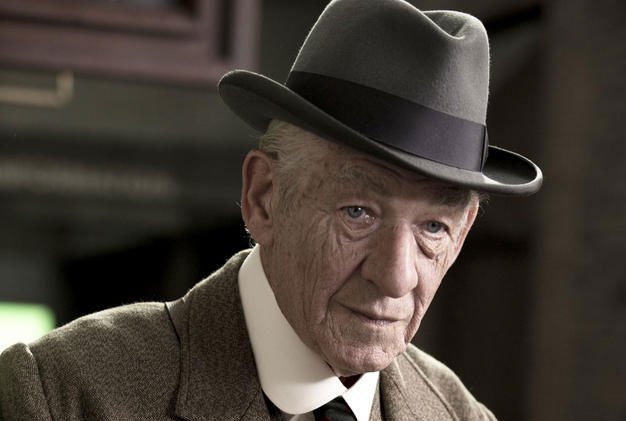 Ian McKellen as the aging Sherlock Holmes is always watchable.

Bill Condon makes two kinds of movies. There are the small, measured historical works – titles like Gods And Monsters and Kinsey – and the histrionic would-be blockbusters like Dreamgirls, The Fifth Estate and the two parts of Twilight: Breaking Dawn.

After the decisive failure of The Fifth Estate, he’s regrouped and retreated to the smaller, delicate frame of Mr. Holmes, an intimate adaptation of Mitch Cullin’s novel A Slight Trick Of The Mind, which imagines the elderly, infirm Sherlock Holmes retiring to the seaside in 1947, where his housekeeper’s precocious son Roger (Milo Parker) nudges him to revisit the details of the case that drove him to give up the sleuthing business decades earlier.

It’s a small story, and an almost entirely internal one, with Holmes wandering through not one set of flashbacks, but two – the case, and a more recent trip to Japan in search of a plant with properties that might alleviate his encroaching dementia – while in the present doing very little besides tending to his bees and arguing with his housekeeper (Laura Linney) and doctor (Roger Allam).

Fortunately, Condon has cast Ian McKellen as Holmes, and this alone makes the movie worth your time. McKellen played the elderly Frankenstein director James Whale in Condon’s 1998 drama Gods And Monsters, and the two artists immediately recapture that film’s understated melancholy – though the secrets here are very different, and Holmes’s relationship to young Roger is similarly dissimilar from the one forged between McKellen and Brendan Fraser in Gods And Monsters.

But the longer Mr. Holmes goes on, the more insubstantial it seems. The mysteries Holmes is investigating are modest, the characters around him not quite as interesting as the film insists. Neither Linney nor Allam is at fault for that they just don’t have anything to do besides stand around wearing disapproving looks.

McKellen is always watchable and finds ways to suggest Holmes’s increasing frailty that don’t read like an actor dulling himself down for effect. But there’s almost nothing else to this movie besides its star.