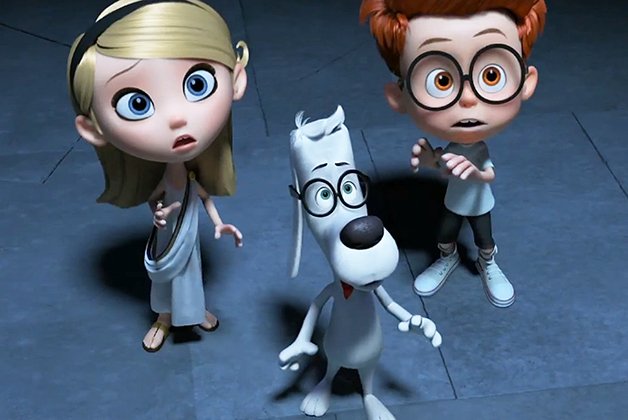 Those around long enough to remember Peabody’s Improbable History will be familiar with how the baby boomer-era cartoon messes with momentous events in light-hearted, rib-tickling ways.

In the original show, the genius dog Mr. Peabody schools his adopted human child Sherman on history by travelling back in time to meet Beethoven, Napoleon and Edgar Allan Poe, giving these figures and their achievements a zany spin every time. Did you know that Poe wrote horror stories after being frightened by his income tax?

Now the 2D, hand drawn P & S have been yanked into the future, appearing in their very own 3D, computer-animated movie where they tinker with Marie Antoinette, King Tut, Leonardo da Vinci and the Trojan War.

Their adventures maintain the fun and humour of the cartoons, this time with more dazzling views and roller coaster-ride momentum. The sight gags periodically resort to toilet humour (see how the Greeks trickle out of the Trojan Horse’s rear end) but it’s a welcome antidote to some of Peabody’s characteristically stuffy puns.

The movie has a harder time incorporating the duo’s episodic adventures into a feature-length story, which involves Peabody’s efforts to stave off a villainous child welfare worker who is convinced a dog can’t parent a child. The father-son emotional arc is a clunky and strained framework to the zippy entertainment, but like historical accuracy, it’s very easy to ignore.