The original African-American bad-boy trash talker wore his need to be respected on his sleeve, but he also unwittingly aided efforts to forestall Black self-determination when he turned his back on his mentor Malcolm X 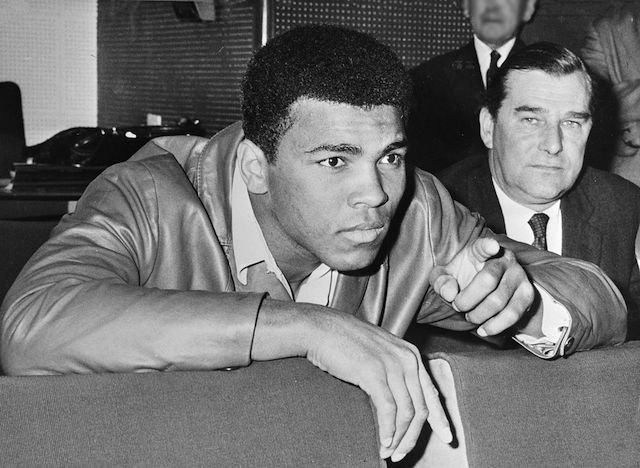 In the fall of 1960, a young, extremely talented African-American boxer who had just won the Olympic boxing gold medal as a light heavyweight was denied restaurant service in his hometown of Louisville, Kentucky. He was told they didn’t serve “niggers,” Olympic gold or not.

The 18-year-old boxing champion named Cassius Clay left the restaurant and made his way to the Second Street Bridge. He yanked the medal from around his neck and threw it into the Ohio River, exclaiming, “This thing ain’t worth nothing.”

His younger brother Rahman Ali, who accompanied him on that legendary – some say mythical – evening, has vouched for the authenticity of these events first revealed by Muhammad Ali himself in a 1975 autobiography. Rahman said his brother was profoundly hurt by the racism he’d been subjected to.

This may be an excellent place to begin to understand the man known simply as “the Greatest.”

But the greatest what?

In the world of boxing, Muhammad Ali, who died June 3 from respiratory illness, was not the greatest badass. That honour goes to Jack Johnson, who became the first African-American heavyweight champion of the world and whose defeat of the “Great White Hope,” James J. Jeffries, on July 4, 1910, set off anti-black race riots across the United States.

Outside the ring, Johnson was fearless in the face of racism. He drove expensive cars, wore expensive clothes and dated white women at a time in America when a Black man could be lynched for not yielding the sidewalk to a white man, much less looking at a white woman. Johnson flaunted his big blackness.

The smartest fighter? That’s Floyd Mayweather. Boxing is a business – show business. Mayweather, more than any other professional fighter ever, mastered not only the fine art of hitting while not getting hit in the ring but of taking firm control of his financial life so it has never taken a hit. He retired extremely rich and undefeated: 49 fights, 49 wins, 26 KO victories. ESPN recently called Mayweather the best pound-for-pound fighter of the last 25 years.

Ali wasn’t even the greatest pound-for-pound fighter of all time. That has to be Sugar Ray Robinson. With a record consisting of 200 fights, 173 wins and 108 KO victories, he remains peerless. It was Robinson who showed what the magic of the always-in-your-face jab and the profound beauty of the unexpected straight right hand could do. That’s why early in his career Ali wanted Robinson in his corner.

Ali’s hand speed, footwork, superior athleticism and uncanny ring vision gave him a commanding presence that was unprecedented for a heavyweight. Indeed, he could “float like a butterfly, sting like a bee.”

Yet according to Ali himself, his fame was due to something else. In a 1961 interview he told Sports Illustrated there were other boxers just as proficient in the ring. “Most of them can fight almost as good as I can. I’m just saying you never heard of them. And the reason for that is because they cannot throw the jive. Cassius Clay is a boxer who can throw the jive better than anybody.”

Ever seething beneath the surface was that 18-year-old kid with his gold medal who remained deeply hurt that he wasn’t seen as an equal partner in the quest for the American Dream after representing the U.S. so valiantly at the Rome Olympics.

When he threw that medal into the Ohio River, he could well have been attempting to discard once and for all any naive thought that his personal liberation could be accomplished without a fight to change his country for the better. Little did he know that his personal fight for liberation would be mirrored and in many ways be a catalyst for a generation’s fight for liberation and post-slavery reclamation of identity.

Today it’s largely forgotten that there was a time long before “Black is beautiful” when “Black” was an ugly insult Blacks hurled at each other just as whites hurled the N-word.

The realization that the names Blacks carried were actually the names of former slave masters was the impulse for Blacks like Ali to embrace new names and a new religion.

In these matters, Ali was not an original thinker – nor was he able to navigate these matters without the guidance of Malcolm X.

Under X’s tutelage, Ali (who proved a brilliant student) became eager to use his gift of gab and flamboyant public persona to promote the ideas of equality of opportunity, world peace and human rights.

And yet the white establishment shrewdly manipulated Ali’s need to be.

His epic bouts against “big ugly bear” Sonny Liston were seen as fights for dominance between alienated, dark-hued, thick-lipped, inarticulate lower-class Blacks who clearly had no use whatsoever for the white power structure, and the lighter-hued, “pretty,” poetry-spouting Ali, then still known by his Christian name Cassius Clay, who was quite a charming representative of a rising, conforming and rather acquiescent Black middle class.

That’s not to say Ali wasn’t dedicated to serving something beyond his own naked self-interest.

His “What’s my name?” fight with Ernie Terrell pitted patriotic, Christian, conformist Blacks, as represented by Terrell (who Ali called an “Uncle Tom Negro”), against that growing element in the African-American community who wanted to disengage from socioeconomic bigotry and ideological demagoguery by rejecting white “culture” and attempting to create a Black world as represented by the Nation of Islam and other African-American liberation organizations.

But Ali also unwittingly aided those efforts to forestall African-American self-determination, particularly when he turned his back on his mentor, Malcolm X, and sided with Elijah Muhammad when X was booted from the Nation for calling out the NOI leader’s many episodes of infidelity, particularly those involving teenage girls.

At a critical juncture in the life of the Black movement, Ali had the power to be a clarifier and unifier. Many years later, he acknowledged his error, admitting that “turning my back on Malcolm was one of the mistakes that I regret most in my life.”

Ali’s refusal to fight in Viet Nam is wrapped up in more lore. He was technically a conscientious objector and not necessarily opposed to US aggression and hegemony. Ali stated “War is against the teachings of the Holy Qur’an. I’m not trying to dodge the draft. We are not supposed to take part in no wars unless declared by Allah or The Messenger.”

He took no direct part in any civil rights or anti-war marches or demonstrations. He boxed in countries controlled by tyrants (Seko’s Zaire and Marcos’s Philippines), seemingly unaware or unconcerned, and had to be schooled about Apartheid and urged not to fight in South Africa in 1972 before deciding he wouldn’t.

Muhammad Ali was the original African-American bad-boy trash talker, who wore his need to be respected on his sleeve and dared anyone to challenge his wit.

His use of spoken word performance to garner media attention, control his image and disarm the lurking racist vitriol was ingenious. He presaged the reality television/social media phenomena by decades and controlled his own celebrity cult by using the media as a selfie stick. He was a notorious self-promoter who tapped into the world’s desperate need for counterculture heroes.

The most famous athlete of his day, Ali became humanity’s ambassador to the world.

As his daughter Laila said after his death on June 3 at the age of 74: “It amazes me how just the presence of my father… brings so many people to tears. This man just transcends everything there is.”