There’s nothing American or primitive about James Blackshaw’s fingerpicking 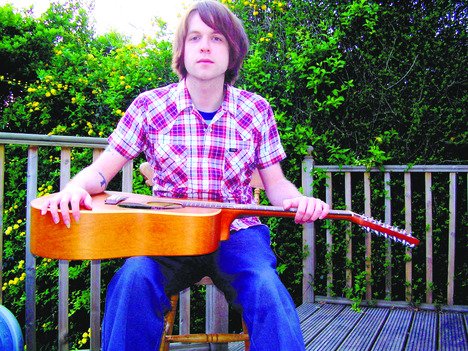 The 12-string guitar has always had a mystical quality, and not just because Jimmy Page used it to weave spells on Stairway To Heaven.

Its lingering overtones, sustain and resonance are immediately distinctive on recordings, evoking an otherworldliness that its six-string sibling can’t always achieve.

British guitarist James Blackshaw harnesses this 12-string power, and doesn’t need Zeppelin amplification to do it. He fingerpicks an acoustic model, and his vibrant, haunting, mostly instrumental compositions, which have won him a dedicated UK following, are finally making inroads on these shores.

“I just picked one up and fell in love with the instrument,” says Blackshaw prior to sound-checking for a gig in Holland. “Not many people play it, especially not as a primary instrument, these days.

“It’s a shame. It’s really fantastic and has this life outside of being a six-string guitar with twice as many strings.”

Last year’s The Glass Bead Game (Young God), his seventh solo album, is a dense, textural affair that ranges from minimal piano experimentation on Fix to the orchestral grandeur of the stunning lead track, Cross, which features the angelic vocal drones of Trembling Bells’ Lavinia Blackwall.

Despite near-universal critical praise for Glass Bead, including gushing approval from the notoriously cantankerous Kitty Empire of the Observer, Blackshaw isn’t the type to bask in waves of adulation.

“To be honest, I’m more of the person who, if I get one bad review out of 10, that’s the one that’s going to stick in my head,” he says. “I’m a bit of glass-half-empty person in that respect.”

Blackshaw’s avant-garde folk is stylistically reminiscent of artists on John Fahey’s vaunted Takoma Records, the Maryland-based label that was home to neoclassical 12-stringer Robbie Basho, whom Blackshaw often cites as an inspiration.

Fahey’s responsible for coining the curious genre term “American primitive guitar,” a country and blues fingerpicking style often associated with Blackshaw, for better or for worse.

“It’s a weird term, and I think John used it with tongue in cheek,” says Blackshaw. “I would never claim to play ‘American primitive’ music.

“I’m not American, and my playing is not that primitive.”