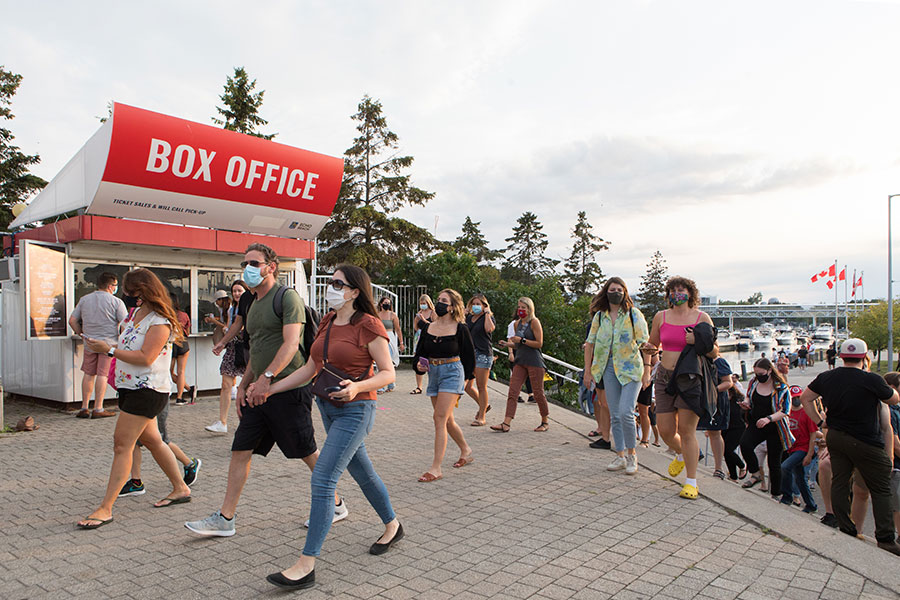 Masked fans arrive for a concert at Budweiser Stage.

The Juno Awards had big plans to celebrate its 50th anniversary where it all started, in Toronto – and they did last year, in a way. Instead of a big blowout at Scotiabank Arena, they had a cross-country virtual award show at venues across Canada, including the soon-to-reopen Massey Hall. But there was no live audience.

So for their 51st anniversary, the Junos are getting a do-over of sorts. The televised Canadian music awards show will be broadcast live from Budweiser Stage on May 15, 2022.

The Junos have done a ton of pivoting since the pandemic started, moving, postponing and cancelling events multiple times. Putting this year’s show at Ontario Place’s outdoor amphitheatre gives them a bit more wiggle room. Even if we go into some version of a lockdown again, the lowered outdoor transmission risk likely means they can fit in some live viewers.

And if we’re ahead of the curve by then, there’s room for 16,000. Currently, in accordance with Ontario step 3 reopening rules, Budweiser Stage is operating at 75 per cent capacity and, along with all Live Nation venues, will soon enact a mandatory vaccination requirement for all events.

CARAS, the organization that puts on the Junos, has also announced Toronto will be home to Juno Week from May 9-15. Last time, those events – panels, songwriting workshops, charity events and concerts – were mostly virtual, but this time it could be in-person or use a hybrid model. Those events are held at multiple venues, but if they want a big marquee show then Budweiser Stage will be a good home base.

The 2022 will Juno Awards recognize Canadian music that came out between September 1, 2020, and November 5, 2021. If you are an artist that wants to submit your music for consideration, you can do it at the Junos’ website.