A first look inside the rebuilt Silver Dollar Room

It's not open yet, but the historic Toronto music venue has been rebuilt to exact specifications at its original location. Here's what it looks like 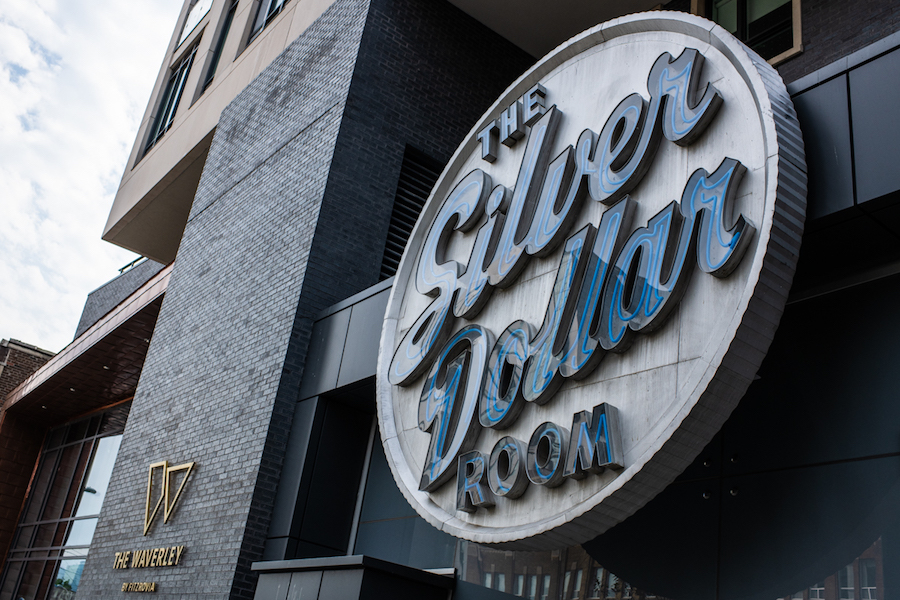 The original neon Silver Dollar Room sign has been restored and is sitting back in its original location at College and Spadina.

The Silver Dollar Room is back, but you can’t go in just yet. It’s still closed to the public, but NOW has a first look at the rebuilt music venue.

The long-running Toronto blues-turned-rock bar was demolished along with the adjoining Waverly Hotel in 2018 to make way for a new residential property. It went out in spectacular fashion with notorious music booker Dan Burke tearing down the Silver Dollar stage sign and crowdsurfing to the squalling sounds of Metz.

The music scene did plenty of mourning for the venue at the time, but though the venue was soon a gaping hole at the corner of Spadina and College, it didn’t fully disappear. Before it was torn down, local councillor Joe Cressy stepped in to get the Silver Dollar designated as a heritage site – which meant that, once the new building was up, the venue had to be rebuilt exactly. And now that the new residential development, the Waverley, has opened, so too has the Silver Dollar – or at least it will, soon.

Fitzrovia Real Estate took over the Waverley development from the original owners the Wynn Group and changed its plans from student residence to purpose-built rental. In doing so, they also took over the Silver Dollar plans, and they’ve rebuilt it to very precise specifications. But they’re still searching for a venue operator to take it over and run it. In the meantime, the venue is back where it’s stood since 1958 (actually one floor lower) waiting to come back to life.

Before that happens, photographer Sid Tangerine and I got access to the venue as part of a tour of the Waverley.

As someone who’s spent more half-remembered nights at the Silver Dollar than probably any other bar or music venue in the city, stepping into the new Silver Dollar was an uncanny experience for me. It was rebuilt to exact proportions so everything is where it used to be, but the room – with interior design by DesignAgency – is much brighter and cleaner than the old bar likely ever was. It feels surreal, like walking through your childhood home in a dream.

“It was very prescriptive,” says Fitzrovia CEO Adrian Rocca. “They gave us full detailed drawings. The stage had to be here with its original dimensions, it had to be the original bar in the original place. If you look at the floors, this is the original terrazzo that got chipped out, reinforced and reinstalled. Everything was down to the millimetre.”

There were actually five pieces that were required to be restored by the heritage bylaw (which they also refurbished): the original sign, the original bar, the oil murals on the wall and the terrazzo floor. The name, the Waverley, was also determined for them. “But we love it,” says Rocca. “This project is all about history and heritage, paying homage to the culture and the character of the neighbourhood.”

The original stage is back in place, minus the Silver Dollar sign that once sat behind it. The stage has always been small, with drums often crammed in behind the other instruments – but sitting empty in its new space, it somehow looks even smaller.

The room is cozy, with a capacity of 165 people. But the unique layout of the room, spread out sideways with the bar close to the stage at the back, meant you never felt too far from the musicians.

The bar is original too, and Fitzrovia director of marketing Ryan Funt says that was one of the most intensive restorations. “This portion of the bar at the bottom was in disrepair, so we had it taken out and reupholstered and then reattached,” he says.

The original Silver Dollar wall murals date back to the 1950s and pay homage to the iconic blues musicians they were looking to fill the room with: B.B. King, Muddy Waters, Chuck Berry, Ella Fitzgerald and more.

That was always there, but was easy to miss when the lights were low and the venue was filled with people. Some of the colours had faded or been made less vibrant, and certain sections had been damaged over the years with signs and flyers.

That was the case with this section. Heritage consultants GBCA Architects and Clifford Restoration discovered a section with the words “The Silver Dollar” had been covered by a plastic sheen and painted over. They did some historical detective work to return it to its original form.

“Clifford did amazing work,” says Funt. “When we came onboard, we got a comprehensive report detailing everything: what’s of heritage importance and value, how to dissemble it, how you reassemble it. It literally details things item by item.”

No more stairs and no more back room

One thing that’s missing is the back room, where show-goers could hang out and shoot a game of pool between sets. The venue is also now street-level, missing its usual trip up a stairway.

All the furniture is new, too, as is much of the lighting. The fixtures, including a soon-to-be-installed strip of LED, makes it feel much more like a modern hotel cocktail bar or restaurant than the beer-soaked home of bands like Metz, Fucked Up and Mac DeMarco.

But they do plan to turn it back into a live music venue, and are looking for the right person to take over the venue. Rocca says he’s picturing a mix between live music, food and cocktails. “Someone like a Drake Hotel-style operator would be great,” he says. “Someone with a really cool vision and a great handle on music.” The genre will depend on who they get.

He says they’ve had some talks with potential people, but they got stalled by the pandemic. Beloved and notorious former booker Dan Burke, who is currently putting on shows at spots like the Horseshoe and Monarch Tavern, has not been one of them.

“We think the Silver Dollar Room should be at the original spot and we think the original elements are really unique to its identity,” he says. “And we just want to get a really great operator and bring it back to the music community. That’s what it’s all about.”

A heritage plaque sits in front of the Silver Dollar space explaining the history of the venue from 1958 to 2018.

The back hallway of the Waverley also features a handful of vintage Silver Dollar posters along with a historical breakdown written by the Flyer Vault’s Daniel Tate of all the venue’s incarnations from seedy bar to working-class tavern to hotspot of jazz, blues, bluegrass, 80s punk and indie (including artists like Pixies, White Zombie and more) until the 2000s/2010s Dan Burke era filled with DIY garage rock (Death From Above, Jay Reatard, Anagram, etc).

The stairwell leading from the venue up into the Waverley is filled with musical nods, somewhat reminiscent of the nearby, recently reopened El Mocambo.

From Comfort Zone to co-working zone

The Waverley itself, despite the name, has fewer nods to its its hotel past or its precarious residents who were displaced by its closure.

The building – with interiors also by DesignAgency – has checkered floors in the elevators and throughout the, which was a feature of the original.

A second floor co-working space, too, is named the Comfort Zone. Rocca calls it “a cheeky reminder” of the hotel’s past.

The lobby of the Waverley also has a co-working and lounge space. Cafe/bar Boxcar Social has a bar/kiosk that will serve coffee and drinks starting next week. It’s a take on a hotel bar. “We wanted something that would evolve throughout the day, to create that sense of animation,” says Rocca.

The whole first floor is licensed and open to the public.

Street artist BirdO made a giant wall sized mural behind the Boxcar bar and heading up the stairs. Like the Drake or Gladstone, the Waverley has its own art curator, Ashley Mulvihill of Ninth Editions. She filled the building with art by Thrush Holmes, OCAD alum Malik McKoy and UK illustrator Dan Jamieson. Everything from the music playlist (it was playing Q-Tip while I walked through) to the lobby’s scent is also “highly curated,” Rocca says.

The co-working space dubbed the Comfort Zone is residents-only. It features a fireplace, acoustic wall, meeting room and lounge area and it overlooks the lobby. There is also theatre seating and a projection space.

There are lots of 21st century add-ons, including a resident app, an automatic parcel room with refrigeration, a branded BMW available for rent, a dry cleaning service, an in-house pet grooming and walking service. There’s a Cleveland Clinic virtual health centre included in rent, where residents can use cameras and diagnostic equipment to connect with a doctor on a screen. And there’s a resident beehive on the roof, with occasional jars of local honey included in the rent.

There’s also a 2,500-square-foot gym called the Temple with hourly virtual yoga and pilates classes and a rooftop pool on floor 15 dubbed the Lido. Eventually, there will be a pet spa called Beauty For The Beast.

The Wynn Group originally envisioned the Waverley as a student-focused residence with all studio rooms (almost like dorms), but Fitzrovia converted it to a more conventional purpose-built rental condo-style building. There are 166 units, all but one of which are leased. Prices range from $1,900-$2,100 studios and $4,200-$5,000 three-bedrooms.

That’s obviously considerably higher than the old Waverly, and Fitzrovia (like other developers, which are starting to build in nearby Chinatown) has received some criticism on social media and from musicians for its role in gentrification – marketing based on its proximity to culture like music venues while pricing out artists and residents who create it.

Rocca is nonchalant about it and says he hasn’t felt the pushback because Fitzrovia tends to buy sites that have already gone through the zoning process. In this case, it was the previous Wynn Group who negotiated the 16-storey height, rebuilt Silver Dollar Room and residential/commercial status. “Most of those discussions have already been had before we got here,” he says.

They’re aware that the Silver Dollar is an iconic Toronto institution, and they say they are fully invested in being conservationist stewards. It won’t come fully back to life until they’ve found the right person to run it, but they will likely at least one opening event in the next couple of months complete with live music.

“We’re being really selective,” Funt says. “Our goal is not just about leasing it to get immediate cash flow. We wanted to bring the space back to its potential and allow the details to shine through, which we know will stand the test of time. Now, the goal is to find an operator who can bring it back to its glory and bring it into the future.”