Review: Amyl and the Sniffers’ debut is the perfect mix of pissed-off and laid-back

The urgent four-piece evokes the best of Melbourne rock right now: things might be going to shit, but it’s still possible to be a little bit laid-back about it 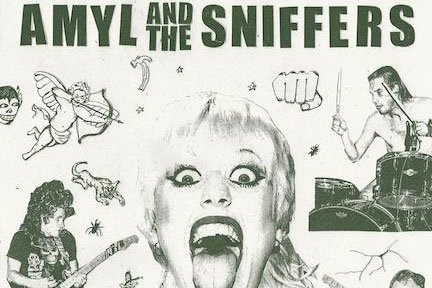 The pressure on a young band can be crushing when going from lo-fi self-made EPs and 7-inches to a big-indie-label-backed full-length debut with a big-name producer attached to it (Ross Orton, who co-produced Arctic Monkeys’ Mercury-nominated AM). But Melbourne punks Amyl and the Sniffers don’t seem to be feeling it on these 11 songs, keeping just the right amount of grit and rawness in a well-defined mix that lets Amy Taylor’s pissed-off lyrics rise above the fast guitar riffs and mighty drum-bashing.

Despite the four-piece’s 70s glam rock image (Taylor’s look is Wendy O. Williams meets Cherie Currie guitarist Dec Martens, drummer Bryce Wilson and bassist Gus Romer often sport mullets), the music is often more trashy hardcore than glitter rock, urgent yet not relentlessly breakneck and with just enough melody to spell serious fun. Something about this balance feels particular to the Melbourne scene – things might be going to shit, but it’s still possible to be a little bit laid-back about it.

The self-titled record is full of personality. Like fellow Melbourne resident Courtney Barnett, who wears her weaknesses on her sleeve, Taylor speaks her truth unabashedly. On the excellent two-and-a-half-minute Control, she wails “I want control / I’m obsessed / It’s the reason I exist” while the song builds louder and fiercer beneath her, culminating in the shout-along chorus, “I LIKE CONTROL / I NEED CONTROL.”

The bass-guitar-driven Got You feels like a stab at a love song, but with a shot of tough male gang vocals (these pop up as welcome surprises throughout the record) responding to Taylor’s smitten ones. Gacked On Anger and Cup Of Destiny unleash full-throttle fury against class, debt and minimum wage in the face of trying to do the right thing, replete with new-to-most-of-us phrases like “I’m stressed on tick” (in addition to “I’m gacked on anger”).

Top track: Got You