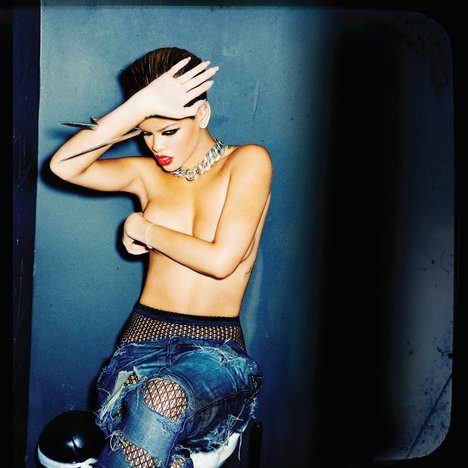 Rated R is without question a very dark album, which should come as no surprise. After her breakup with Chris Brown following a vicious beating, it was assumed that she’d be addressing domestic abuse and heartbreak, but we were expecting a more introspective collection of ballads and tearjerkers. Instead, she’s delivered an angry and emotional album of goth R&B jams (new genre alert?) with heavy rock overtones.

Amidst the violent revenge fantasies and appropriation of dancehall machismo, she also tackles self-doubt and regret, making Rated R one of the more complex breakup albums ever to penetrate the mainstream. Rihanna has given off an impenetrable ice princess vibe, but now we’re getting a much clearer picture of her as a real human being navigating a complicated emotional battlefield.

On the musical front, Rihanna is at her most adventurous, and while we’re not completely convinced that all the wailing hard rock guitars suit her, the aggression makes sense within the context of the album.