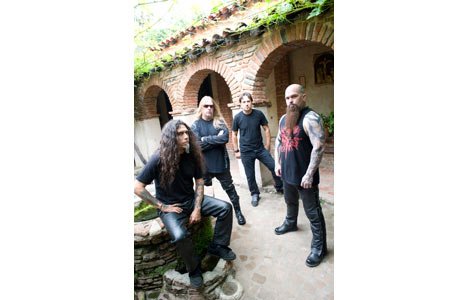 It’s a bummer that Slayer’s November 13 Air Canada Centre show, and their entire tour, has been postponed due to lead singer/bassist Tom Araya’s back problems, but we can console ourselves with their excellent new album, which finds the dark-minded, serial-killer-obsessed California thrashers keeping all things in balance.

Breakneck speeds slam against half-time pit-stompers, intricate intros lead into catchy choruses, and talking and singing occasionally offset Araya’s throat-scraping yells. The production has a gritty, punky warmth, with returned-to-the-fold Dave Lombardo’s pummelling double bass drums high in the mix. As for lyrics, they’re as nightmarish as anything on Seasons In The Abyss.

It’s hard to name the strongest tune. The title track’s bridge has an inventive guitar line that revs and dive-bombs like some war missile, though the taut, malevolent Snuff – with standout Araya vocals at the end – proves old-school speed metal is still exciting nearly 30 years after the Big Four invented it.