The Beauties reinvent themselves on debut studio recording 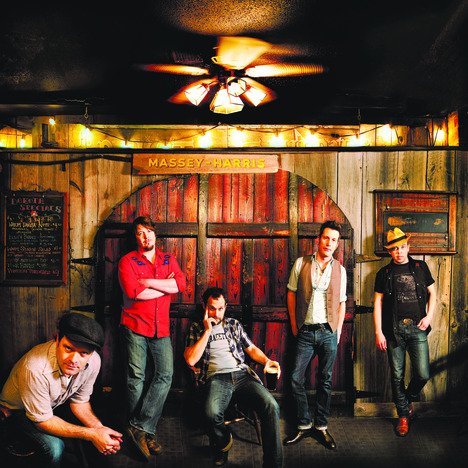 Three years of raucous, pint-hoisting live sets at the Dakota Tavern have rightfully bestowed the title of Toronto’s favourite bar band on the Beauties. There’s only one problem: they’re tired of playing at bars.

Started as an informal jam between friends (one of whom, singer/guitarist Shawn Creamer, co-owns the bar), the band’s Sunday-night Dakota residency soon attracted a slew of all-star guest musicians, a dedicated group of regulars and, by the third year, lineups out the door. Now, stepping off their familiar stage, the Beauties are ready to take things to the next level.

“We know we’re a great bar band. We’ve got that down. Now we want to be a great stadium rock band,” Creamer confides over pints at 3 Speed, a bar co-owned by his Beauties bandmate Jud Ruhl. (The other members, Darin McConnell, Paul Pfisterer and Derek Downham, make their living mostly as working musicians.) “Playing at the Dakota got us to where we are, but we’ve outgrown that, at least in our minds.”

On Saturday at the Horseshoe, the Beauties release their debut self-titled album, a diverse record as much inspired by the studio as it is by the stage.

“We’ve all hung out together, drunk together and played together, but this was the first time we’d ever recorded together,” says Ruhl.

“It’s more time than we’ve ever spent rehearsing instead of just playing onstage, and it allowed the songs to evolve into something different,” adds Creamer. “We thought the record was going to take three weeks, but it ended up taking three months.”

Recorded with Marty Kinack (producer of Sarah Harmer and Hayden and sound technician for Broken Social Scene), with Kevin Drew as “spiritual guru,” the album expands beyond their well-trodden roots reputation and runs the gamut from blues to country to hard rock.

“There’s a perception of us as this country bar band, and there are definitely some country influences on the record, but there’s as much influence from the Pixies and the Velvet Underground,” Creamer says.

“Any of the Sunday-night crowd who buy the record will hear something they’ve never heard from us before.”

The Beauties are best known for their Dakota residency, but they had their inception first at Jud Ruhl’s parents’ cottage and then at The Paddock.

Like many Toronto bands, The Beauties have ties to Broken Social Scene.