From Teenanger to a giant James Taylor singalong with Choir! Choir! Choir!, here's where you can party while supporting a good cause 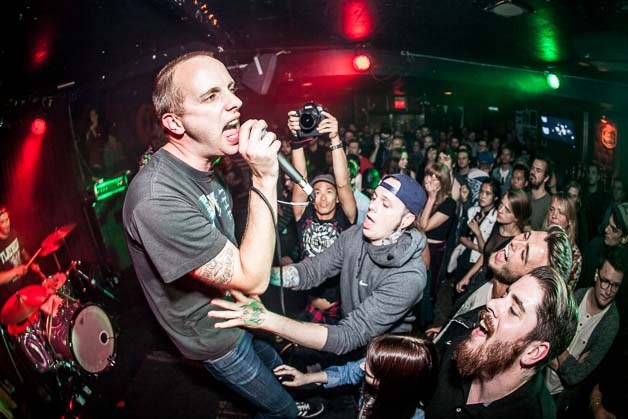 The live music touring schedule starts to slow down in December (though definitely not stop), but that’s when benefit show season heats up. Local musicians (and a few special guests) band together to raise money, food and awareness for charities, often with a more casual and collaborative vibe than the average concert. So whether you’re a seasoned caroller or can’t stand a single “fa,” “la” or “la,” these shows are well worth your while. Hip-hop, dance parties, folk, garage and punk are all represented.

The 25th annual Riverdale Share aims to raise over $50,000 plus truckloads of food for families – in one afternoon. Hosted by City of Toronto Music Sector Development Officer Mike Tanner, this year’s performers include folksinger Murray McLauchlan, blues player Danny Marks, Julian Taylor, Masini McDermott, Tim Bovaconti, Kim Stockwood and the Nylons’s Micah Barnes as well as Mia Sheard (a Riverdale-based singer and psychotherapist), the Frankland Junior Choir and more. Clearly the east end knows how to band together for a good cause.

A fundraiser for the Centre for Addiction and Mental Health’s Gifts Of Light program, the 13th annual Andy Kim Christmas Show sees the Sugar Sugar singer and host Seán Cullen joined by an impressive roster of special guests: the Sheepdogs, Ron Sexsmith, Maestro, Hawksley Workman, members of The Strumbellas, Platinum Blonde, Michel Pagliaro, Danny Michel, Choir! Choir! Choir! and more. It’s one of the biggest benefit shows each year. “I look forward to the Andy Kim Christmas Show every year… even more than Christmas itself,” says Ron Sexsmith.

Krampus is a terrifying horned creature who punishes misbehaving children at Christmas. Placate him by bringing a non-perishable food item for the Fort York Food Bank to this annual fete put on by Buzz Records and Indie 88. The party features Brooklyn power pop band Charly Bliss alongside a solid set of local hook-heavy garage rock bands: Twist, Casper Skulls and Lonely Parade.

Toronto folk rockers the Wooden Sky (plus special guests) bring their Dune-inspired fifth album, Swimming In Strange Waters, to their eighth annual Holiday Show ahead of a string of 2018 tour dates. Over seven years, the band has raised $21,000 in support of various local charities. This year’s proceeds go to Romero House, which helps refugee families with resettlement. General admission is $25, but attendees are welcome to donate more.

A diverse night of music, comedy (plus food and drinks) in support of the Daily Bread Food Bank, T Dots’ holiday food drive features jazz, rock and hip-hop artists CoCo Coelho, Ai’ma Khojé, Signs Of a Slumbering Beast, Chris Birkett and more, along with comedian Joey Harlem as MC. Drop off non-perishable food donations between December 1 and 16, show is December 16 at 7 pm.

For the second year in a row, local heroes Choir! Choir! Choir! have launched their #25DaysOfCharity fundraiser, which begins December 1 and culminates in a giant singalong of James Taylor’s Shower The People at the Phoenix. For the days leading up to Christmas, the singing group’s website looks like an advent calendar: behind each date, a member of the choir has selected a different charity to support. At the end of the 25 days, the funds are divided evenly among the different organizations. Last year, C!C!C! raised $50,000.

Jittery Toronto indie band Future Peers have put together a charity pizza party, with a lineup including actor-turned electro-pop singer Audrey and DJ Jerk Chicken. All proceeds go to jack.org, and if you bring some non-perishable food items to donate, you can trade them for pizza.

Punk bands have always been known to band together to throw a good benefit, and this garagey food drive/fundraiser for Parkdale Community Food Bank is sure to be no exception.