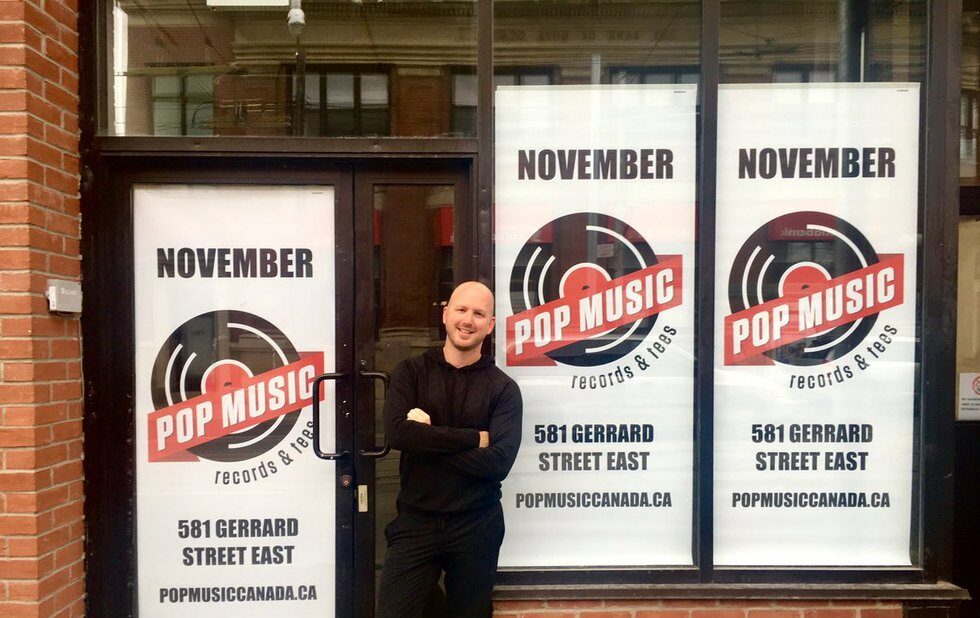 For the past few years, Record Store Day has been treating Black Friday as a sequel to its April indie music retail stimulator. This year in Toronto, the event is about more than a bunch of exclusive records – it’s also a launchpad for new record stores.

November 24 to 26 is the grand opening weekend for a new East Chinatown record store called Pop Music (581 Gerrard, at Broadview). The shop is owned by Derek Antonio, the former general manager of the HMV superstore on Yonge (he was there for eight years and went down with the ship).

As the name suggests, Pop Music goes against typical record snobbery and instead brings some of the ethos of that old HMV behemoth, a throwback to when retail still drove record sales and represented some form of music monoculture – a mix of commercialism and anything-goes indie spirit that Stuart Berman lovingly called “the Nirvana of record stores.”

“The vision is to be an inclusive environment where people don’t have to be intimidated,” says Antonio. “There’s a certain coldness that some people associate with record stores if they’re not hardcore collectors, and we want to be the opposite of that. We want it to be a fun space, we want it to have that old sense of belonging and warmth that records can provide.”

Despite the name, the store isn’t just stocking Top 40 (the fact that they only sell vinyl isn’t always conducive to that) – Antonio describes the selection as a cross-section of pop, jazz, punk, metal, hip-hop, soul, electronic and jazz. So everything, basically, but a focus on “the essentials.” On display are records by artists like Metallica, Amy Winehouse, Lana Del Rey and The Fugees. The store only sells new records, which differentiates it from many of its east-end neighbours. It’s also happy to take special orders, which Antonio says is helping him let the customers decide the direction of the collection.

During Black Friday weekend, Pop Music is offering a 10 per cent discount if you buy three records and a 20 per cent discount for two shirts. They also have some Record Store Day exclusives, like albums by Neil Young, Janis Joplin and U2. The full catalogue will be on their website by the beginning of 2018.

Also officially launching on November 24 is the second location of Dead Dog Records at 1696 Queen West (at Roncesvalles). The expansion of the Bloordale shop will share a storefront with the gothy fashion and art boutique Playdead Cult, “because the rents are crazy and sharing is nice,” says manager/owner Stephen York.

Dead Dog is essentially the front of store, while Playdead runs in limited hours and by appointment. They’ll still feature owner Stu’s work, especially his “dark, impressionistic spin” on classic album art. Both locations of Dead Dog are carrying Record Store Day exclusives, including the Neil Young and Dave Matthews Band releases (which York says are the most requested), and both are featuring a 20 per cent discount for all non-RSD albums.

In October, we reported on the opening of Female Treble, Toronto’s first explicitly feminist record store. At the time it was operating in Eyesore Cinema, but now it has also moved into Unlovable (1415 Dundas West) and is open on Black Friday (November 24) from noon to 7 pm.

It’s a good day to go check out the bar/record store hybrid Female Treble has been cooking up You can enjoy drink specials while owner Lisa Pereira previews new releases all day on the turntables. “We’ve got the new Curtis Harding, Jackie Shane, Acid Nightmares, Xmas records,” she says.

For more on Record Store Day Black Friday, check out all the participating stores here and a list of special releases (subject to availability) here.