Is Blur giving the middle finger to North Americans? 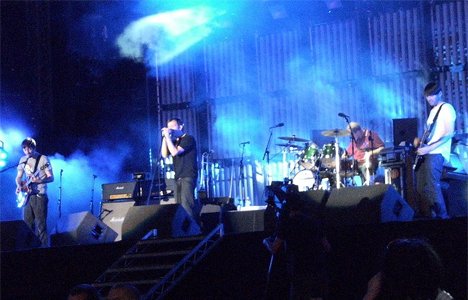 If one of the biggest reunions in rock music last year felt like something of a non-event that’s because it was – at least for everyone west of the Atlantic Ocean.

Blur’s much drooled-over reunion last summer was by all accounts extraordinary. Their headlining sets at Hyde Park, Glastonbury, Oxygen in Ireland and T in the Park in Scotland all received glowing reviews, citing the band as in top form and hardly missing a beat in their first performance together in nine years.

Blur’s North American fans, however, received something of a middle finger from Damon Albarn, Graham Coxon, Alex James and Dave Rowntree, without so much as a single date on our shores. Blur have always been provincial to the max, so we can understand taking care of your own, but still…

Adding insult to injury for us North Americans is the various claims from Blur members that last summer was just a one-off and that no future plans to continue have been considered. Coxon will likely go back to making solo albums no one really cares about because he still hasn’t come to terms with the fact he can’t sing, James returns to his cheese farms, and Rowntree heads back to his very un-rocking political aspirations.

Albarn is reportedly working on a new Gorillaz album called Plastic Beach, which carries its own cold irony in that Gorillaz has historically, at least record sales-wise, been a more popular group in North America than Blur.

If you’re left scratching your head why this seemingly successful reunion was so short lived, directors Will Lovelace and Dylan Southern’s soon to be released documentary No Distance Left to Run, which chronicles Blur’s recent summer of no hard feelings, could shed some light.

No Distance is double sided with a concert film of Blur’s two Hyde Park dates, and judging by the HD trailer (see below) this could be some comfort for Canadian and American Blur fans feelings a touch slighted. At least if you have a decent home theatre system. If not, you can catch its one-day Canadian running this Thursday at the Cineplex Odeon in Vaughan, and Silver City Fairview at Sheppard.

Surely EMI or whoever is marketing this film has its reasons for putting the film premier out in Vaughn instead of downtown. Much like the evanescent nature of this Blur reunion, we’ll just have to wonder why.