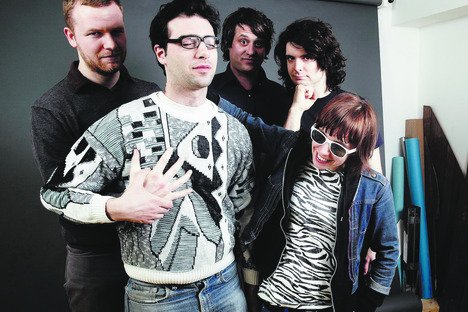 The fact that Brutal Knights listen to a substantial amount of rap might surprise some people, considering the band’s sound harks back to early 80s hardcore.

“Punk music is not so dissimilar to rap,” says Nick Flanagan from his Toronto kitchen after listing influences that include Nipsey Hussle and Jay Electronica. “There are few practitioners in the genre, but we tend to know each other.”

That energy isn’t always there offstage.

“We don’t party as hard as we used to,” chuckles Flanagan. “But wake Katie up and she’ll party all night.”

With two albums and a handful of 7-inch records, the local band retains a melodic edge evidenced best on 2008’s Living By Yourself (Deranged), their most recent North American release. (Their 2009 Total Rebellion EP was only available in Europe.)

“Living By Yourself is the most compact, clear representation of our work to date,” Flanagan says. “But like all our other records, the songs keep the formula of verse-chorus-bridge.

“Everything’s under a minute and a half long.”