Anvil's stamina, hammy person-alities and musicianship blew everyone away 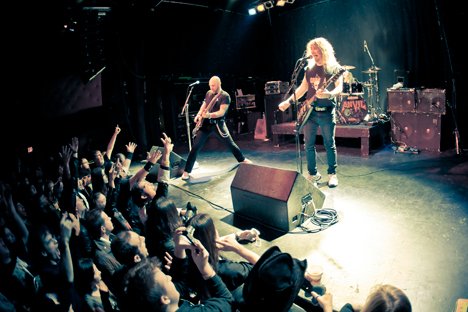 Most of us have a soft spot for underdog success stories, so it was no surprise that Toronto’s Anvil – whose 30-year struggle in heavy metal was tracked in the hit 2008 documentary Anvil! The Story Of Anvil – took the Phoenix stage to chants of “AnVIL, AnVIL, AnVIL.”

It surprised the band members, though, who’ve clearly grown accustomed to Toronto not giving a shit. Guitarist/singer Steve “Lips” Kudlow, who looks permanently stupefied, shook his head in disbelief and quipped, “At least you’re not yelling for Advil.”

It was also fun to see veteran fan Colin “Mad Dog” Brown get onstage and drink beer through his nostril.[rssbreak]