In front of a roaring crowd, the controversial Cash Me Outside girl showed she has some actual star power, but she was outshined by her dazzling opener 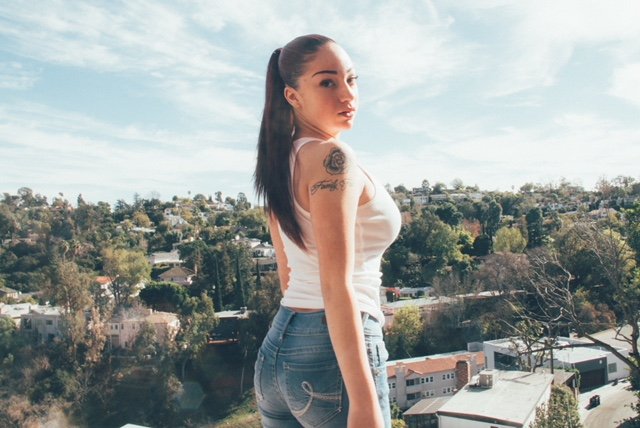 It was an odd sight: straight-laced white parents and their scantily clad tweens packed inside the Mod Club and bopping to Bhad Bhabie, a controversial new artist who has built a brand around her IDGAF attitude.

Within a year, Danielle Bregoli had managed to leverage a surprisingly viable rap career from a viral appearance on Dr. Phil, which spawned an annoying catchphrase and drew undeniable parallels to Lamilton Taeshawn from The Boondocks.

In September 2016, her TV appearance introduced her as the unruly and uncouth Cash Me Outside girl, with a penchant for profanity and AAVE. By September 2017, she had signed to Atlantic and transformed into Bhad Bhabie, a hip-hop newcomer who has amassed millions of views and a multi-album record deal by the age of 14.

Despite the abundance of attention that Bhad Bhabie has received, she has yet to earn industry insiders’ respect. Charlamagne tha God from The Breakfast Club gave Donkey of the Day to the A&R who signed her. “What kind of message are you sending to other little kids?” he asked. “That if they’re disrespectful and negative and disobey authority that they can get a record deal?”

Last month, Ebro Darden from Hot97 tweeted “the Bhad Bhabie thing to me is about white kids wanting to mimic the worst aspects of Black culture for fun.”

Criticism aside, her career has been successful thus far. After opening her set with her new Lil Yachty collab, Gucci Flip Flops, she announced that the song would be debuting at #80 on the Billboard Hot 100 this week.

“Tell me what other 15-year-old female did that?” she asked the roaring crowd. “A bitch making history, okay?”

While these accomplishments are impressive, her performance at the Toronto stop of the Bhanned In The USA tour left much to be desired.

She was clearly comfortable onstage, but her act lacked polish. She opted for mini-rants in place of interludes and toward the end of her set, she recited an incomprehensible a cappella verse reminiscent of this viral video of Iggy Azalea.

Her performance reflected the fact that she is a very new artist who has quickly catapulted from obscurity. In order to harness the star power she seems to possess, she will definitely need some help.

The headliner’s shortcomings were amplified by the contrast between her and her opening act, Asian Doll, the poised antithesis of Bhad Bhabie.

Asian Doll started the show with uptempo bops like Crunch Time and Savage Barbie from her new Doll Szn mixtape, hyping up the crowd with her commanding stage presence. When she joined Bhad Bhabie toward the end of the show for a Hi Bich remix, the headliner faded to the background while Asian Doll effortlessly delivered stronger bars.

But unfortunately, as the Washington Post noted in a review of Bhanned In The USA’s Washington stop, “the fact remains that Bhad Bhabie will probably have a longer, better-covered career than Asian Doll… despite Asian Doll’s ­superior rapping.”

Azealia Banks recently described another rapper as being a “caricature of a Black woman that Black women themselves would never be able to get away with.” Contrasting Bhad Bhabie and Asian Doll (whose moniker could open her up to similar charges of appropriation), the latter’s stronger skills and weaker career attest to this. It is also a callback to the father-daughter motto from ABC’s Scandal, which preaches that Black women have to be twice as good to have half of what their white peers have.

Bhad Bhabie might be up for her first Billboard Award this month, but her underwhelming performance could only be described as, well, bhad.