That was significant for a bunch of reasons 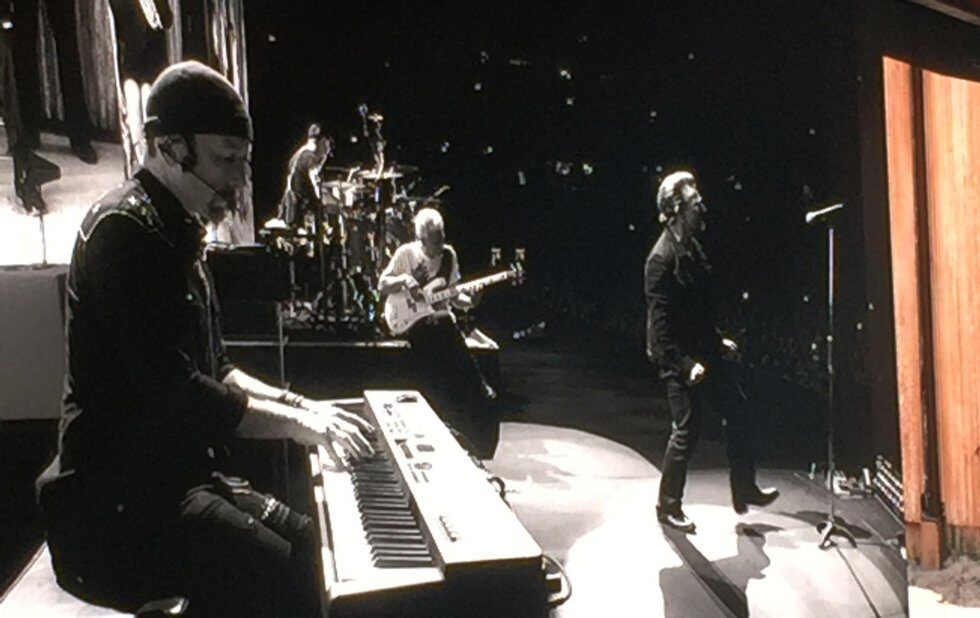 Bono removed his sunglasses. This was significant. Let me explain.

U2’s current 30th anniversary tour behind their breakthrough album, The Joshua Tree, is something of a submissive offering to their rather broad audience. After a few indifferently received records and elaborately staged tours (plus one of the most infamous PR shit-shows in pop culture history), it was a wise, life-saving decision to remind the masses of the record that first brought U2 worldwide attention and adoration.

The band, who’ve made such a fuss about being BIG for so long, appeared small for most of the evening. They initially walked out onto a sub-stage in the middle of the dome, one by one, in the order they each appear on Sunday Bloody Sunday, Larry Mullen’s signature beat driving everyone in Rogers Centre into an immediate frenzy. Bono admitted that being in Canada made him long for his late friend Leonard Cohen, and so he and the Edge played an interpolation of Suzanne during Bad. It was all very nice and human.

When it came time to run through The Joshua Tree, U2 mounted the main stage. Bono played around with his voice and phrasing, they twisted With Or Without You into some Lou Reed thing, and Running To Stand Still conjured Leonard again.

Dwarfed by a mammoth monitor behind them, U2 were specks for a good while. Provocative clips of arid, American landscapes and migrants in transit appeared on the screens, but the band members themselves didn’t until a blistering, riveting version of Bullet The Blue Sky (with Bono slyly quoting Robert Plant as a nod to its obvious Zeppelin influences).

It seemed intentional, this absence, like they thought we might appreciate a break from seeing their 50-foot faces. (This is a band that, going back to their monumental Zoo TV tours, revolutionized the big-screen experience at concerts and possibly even anticipated our current small-screen-addicted culture. They know about screens.)

By keeping their distance and forcing 50,000 onlookers to squint at real people instead of watching TV, they drew us in. And then by Exit, the penultimate song on the record, Bono appeared in a fedora and without his seemingly glued-to-his-head sunglasses. It was jarring to see his bare face. He looked younger, a lot like he did in 1987, and less like a gaudy heavy from the Irish Mob.

From then on and into the entire encore, which included footage of a Syrian refugee camp live-soundtracked by the band’s Miss Sarajevo and a galvanizing Beautiful Day, Bono’s eyes remained naked and he seemed more like a humble guy who happens to have a huge voice than he has in forever.

When he spoke, it felt in the moment, and when he sang, he seemed to be finding the songs as they emerged. He talked eloquently about the power of women and of mobilization against government corruption. It felt conversational and not as though he’d been perfecting patter over the course of weeks, delivering the same product to a different market.

All this presence of mind might be a byproduct of not being able to connect with people any more. Beyond their music, what naysayers mostly deride about the idea of U2 is the palpable effort that seems to go into making them seem huge and special and omnipresent and part of every significant fabric of music. When you’re overexposed to any ambitious entity, you get irritated and reject it pretty hard. And if you’re the entity, you can lose yourself in the hype.

This show was different. There’s a narrative that U2 abhor nostalgia – that they’d rather make interesting new music than dwell on, say, The Joshua Tree. Their collective ego, often perceived to be ginormous, is at least in principle forward-thinking.

But by giving into their history, something shifted. At this show, they behaved more like a band that was comfortable with itself they struck a balance between meeting expectations and still surprising fans, and it made the set dynamic and entertaining.

Frankly, it was cool to see them see that. All Bono had to do was take off his sunglasses.

Rogers Centre The Joshua Tree U2