Review: boygenius were a special kind of magic at Danforth Music Hall

The trio of Phoebe Bridgers, Lucy Dacus and Julien Baker showed serious power when they came together. If only they did it more. 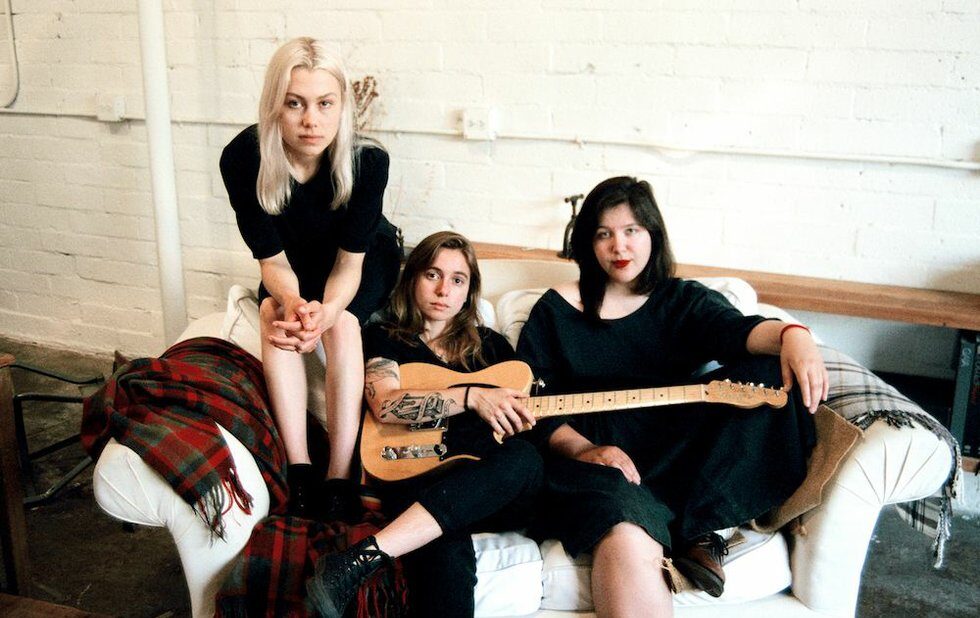 There’s a special magic to boygenius, to which the group’s huge buzz attests. And the magic is about more than the fresh and thrilling novelty of three emerging American indie talents stepping away from hustling their solo careers to come together in allied solidarity and badassery (though, of course, that’s cool, too).

Phoebe Bridgers, Lucy Dacus and Julien Baker captivate and complement, both on their swiftly recorded, just-released self-titled six-song EP and in a live setting, as enraptured fans at a sold-out Danforth Music Hall found out on Saturday. The music is solemn stuff, carrying emotional weight. Each musician takes turns at lead vocals (none seems capable of hitting a bad note), with the others’ voices lifting songs skyward via full-bodied harmonies.

The project feels alive in a powerful way. We don’t often get to see three women in their early 20s, all working within an indie/DIY mindset, side by side (in matching jackets, thank you) at the front of a large stage and sold-out crowd, strumming guitars, faces upturned into the lights, inimitable voices weaving in and out, growing louder and softer as the moments call for, taking small delights in each other. That sight alone held its own special power.

Bridgers made a mostly imperceptible guitar fumble ahead of Me & My Dog, which led to good-natured jokes between the three of them about “baby’s first mistake.” Dacus and Bridgers traded off verses beautifully in Salt In The Wound as Baker, a superb guitarist, added six-string magic throughout. Meanwhile, Baker shone during Stay Down, singing the tough lyrics with both intensity and resignation.

But the boygenius part of the night was the briefest part of the night. The show was made up of solo sets by each artist, capped off three hours in with the six boygenius songs. (On this night, they followed Baker’s headlining set.) In other words, the most-talked-about feature of the tour got the least amount of airtime, and took a long time to get there, though there is little to be done about it – the band only has the songs it has. Oddly, one press release for the show stated that fans may or may not hear any boygenius songs – despite being titled Boygenius Makes Toronto Debut. So perhaps we should feel lucky to have heard from them at all.

None of which is to say the solo sets didn’t have their own appeal and satisfaction. The audience was on board for all of them, packed into the Danforth by 7:30 pm for Dacus’s literary-leaning indie rock emboldened by an effective band. Playing songs from her recent loss-themed Historian, and 2016’s No Burden, the Matador musician easily proved herself as “one to watch,” with memorable melodies, intelligent songwriting and a fine voice.

Bridgers employed a large band, including violin and lap steel players, whose contributions added twang and melodrama. It was in the more minimal moments where the strongest connections were felt. Her songs are almost radically slow and sad – but in her case, sad does not always equate to quiet. She may be singing “Jesus Christ I’m so blue all the time” on Funeral, but she’s also “sick of the chase but hungry for blood” on Killer, and not afraid to belt it out. Her cover of Gillian Welch’s Everything Is Free (“the most beautiful song ever written about Napster,” she quipped beforehand) was both on brand and exquisitely rendered, with a vocal assist from her drummer.

Baker, the best known of the trio thanks to 2017’s acclaimed album Turn Out The Lights, was effortlessly musical, moving like a seasoned pro between electric guitar and piano while often passionately singing at a great distance from the mic. The angst felt genuine, many songs landing with impact while a sole violinist added bits of atmosphere. She’s very emo, and her fans love her for it. They sang along during the dramatic peaks of songs like Appointments.

But let’s circle back to boygenius. A similar mutual joining between musician and crowd happened at the end of their set, and was the night’s most powerful moment. Dacus, Bridgers and Baker stepped away from their mics and toward the edge of the stage for a stirring nearly a cappella rendition of Ketchum, ID, which has a mournful Appalachian folk song feel. They’d never tried this before, they said, and at first, they seemed too quiet to be properly heard.

Then things settled in, and the crowd grew silent. Bridgers strummed an acoustic, singing and swaying along with Baker and Dacus in breathtaking harmony, the lights behind them adding a holy visual. By the second chorus, the crowd began to sing with them, and the effect was like a soft, low hum. The women began to smile. A feeling of joy and trust spread. The song moved toward its ending, and when it got there, the three musicians looked ecstatic.