NOW MagazineMusicConcert reviewsBrockhampton turned all of Rebel into a mosh pit

Brockhampton turned all of Rebel into a mosh pit 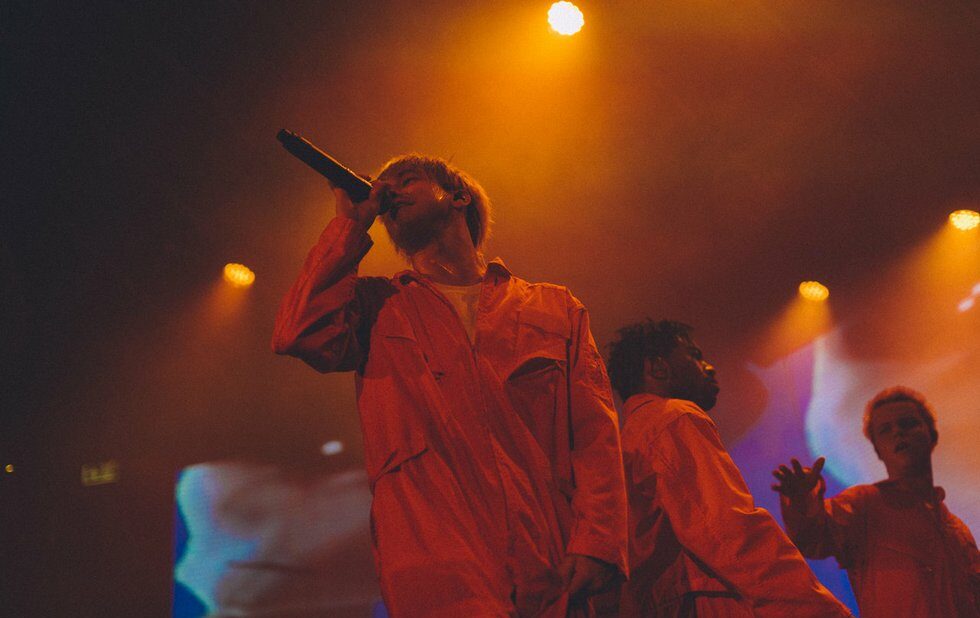 Brockhampton call themselves the “best boy band since One Direction” – which seems to be tongue-in-cheek. A 15-member collective of DIY rappers, singers, producers and directors jumping around in matching orange jumpsuits is not the kind of group that usually puts dollar signs in the eyes of someone like Lou Pearlman or Simon Cowell. But seeing them live at the Rebel stop on their Love Your Parents tour, the claim didn’t seem so ironic after all.

It was hard to move through the crowd at the packed venue, even before the group went on – the massive snaking merch line was a major impediment. In the audience, teenagers sang and danced blissfully to Backstreet Boys songs playing over the house speakers. Anticipation swelled and the crowd jostled and swayed to hold position.

Eventually one member of Brockhampton, Ameer Vann, made his way onstage through the darkness, guided by a headlamp. The beat dropped on BOOGIE, the horn-laden lightning bolt off their latest album, Saturation III (their third in 2017), and immediately the energy shot up to 11. There was no part of the floor that wasn’t a mosh pit, and it never let up for the duration of the two-hour set. The sheer enthusiasm on both sides of the stage was so exhausting, it’s hard to think how the group can pull it off night after night.

It helps that at any given moment there were five or six guys on their feet with mics, taking turns as MCs and hypemen while the others lounged on chairs and couches behind them. For Brockhampton, every song is a posse cut, every hook is to be screamed back at the top of your lungs.

There’s an easy comparison to the raw energy of early Odd Future, and it’s not hard to flash back to Tyler, The Creator leading crowds of angsty teens through chants of “Kill People, Burn Shit, Fuck School.” Except in this case, the most enthusiastic call-and-responses are about the innocent joy of male friendship, DIY spirit, being yourself and queer representation in hip-hop.

Sure, there was also a “fuck Pitchfork” chant, but in many ways Brockhampton are the seven-years-woker version of Odd Future. At one point the group asked for us to boo them. “Fuck you means I love you,” they said. Then they picked one guy in the crowd and made him the outlet for everyone’s anger, a move that might seem like bullying if he hadn’t been so clearly into it. It was positive release of anger, emotion channelled into good vibes. It didn’t feel out of place with Abstract and Matt Champion’s request for everyone to “hug your homie.”

Kevin Abstract has a line in JUNKY about how he raps so much about being gay because there aren’t enough rappers who are gay. The crowd filled in the line for him. “Damn,” he said, impressed, despite the many white people in the crowd screaming the n-word from those lyrics. “Tell your mom and dad that Brockhampton’s pushing the gay agenda on their children.”

Fans surely have their favourite members, each of whom got their chance to shine and showcase their individual bit of wordplay or vocal tic – Joba, Merlyn, Dom, Ameer Vann. Even Bearface, who was lounging on a couch the entire set until then, got the solo stage to sing a pair of tender ballads and rock an expressive Slash-style guitar solo.

The group reconvened for an encore of their name-drop fest STAR, which they already played earlier in the set. The song includes Kevin Abstract’s fan favourite line about how “he don’t fuck with no white boys” unless it’s Shawn Mendes. He had tweeted to invite him before the show, and actually got a response from the Canadian pop star saying he would have loved to attend but had just left. “I know y’all love Drake here,” Abstract said after the song. “But we love Shawn Mendes.” Still, he replaced the name “Shawn Mendes” with “Jaden Walker,” his real-life boyfriend, every time they played it.

And, yes, they played it more than twice. Taking a cue from Kanye and Jay-Z’s Watch The Throne tour, they hit repeat on the track, amping the crowd up each time. For one, Dom came over to the roped-off VIP area and performed on top of a platform, basically within the audience. For the fourth, they invited anyone wearing an orange jumpsuit (the merch line paid off!) or who had painted themselves blue like Brockhampton in the STAR video to come up onstage. Then they played the song again with a stage full of kids losing their shit. A previously bored-looking dad took out his phone and filmed from side stage.

When it seemed like they’d finally gotten STAR out of their system, they teased a few bars of a different song, and then that all-too-familiar beat dropped and they did it one more time. Five in a row, six total. I’m not sure it will ever stop looping in my brain.

It was the kind of right-place-right-time show that felt like a real “you had to be there” moment but could easily have been a mirage of hype. Maybe we’ll look back on it as monumental, maybe as flash in the pan. But for one night, Brockhampton were a legitimate boy band.