Back at the Harbourfront Centre after a decade, your hometown band brought July Talk, Charlotte Cornfield, an Arcade Fire cover and Anthems with an actual 15-year-old girl 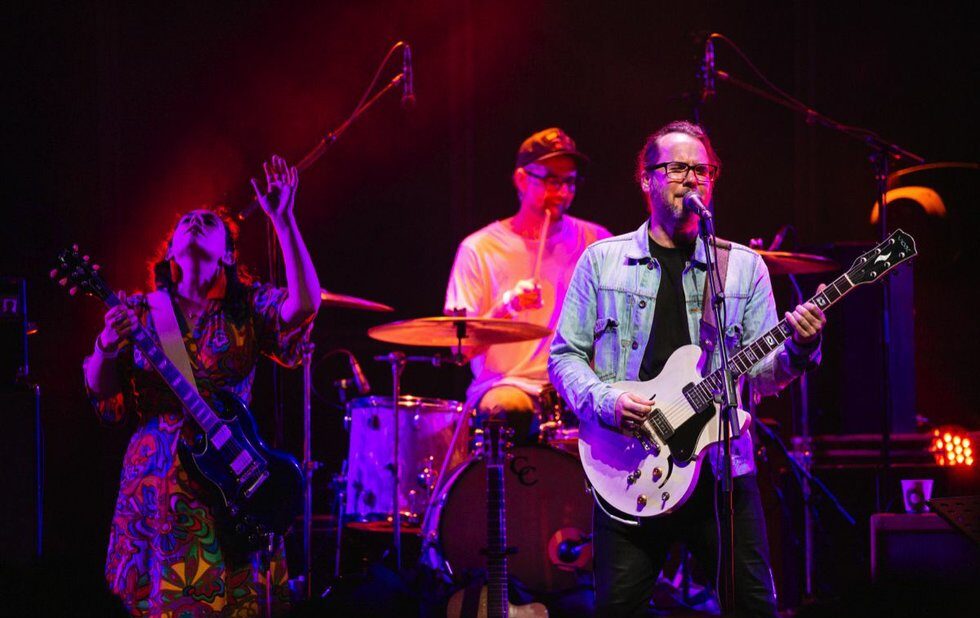 When you swing for the fences, you sometimes strike out, which is what can make the band’s more “regular” concerts seem somewhat disappointing. But they’re still power-hitters when it comes to hometown shows.

For Canada Day, they returned to Harbourfront Centre, the scene of some of their most memorable shows, including one of their best-ever 10 years ago. At that decade-ago show, the sprawling band had recently settled into a core lineup that let busy breakout stars like Leslie Feist, Amy Millan and Emily Haines be occasional guest stars, but everyone reconvened for that concert, playing encores until the noise curfew forced them off the stage.

This time around, they were back to the core members who played on recent double EP Let’s Try The After, with newer regulars Ariel Engle and Lisa Lobsinger in the Feist/Haines roles. 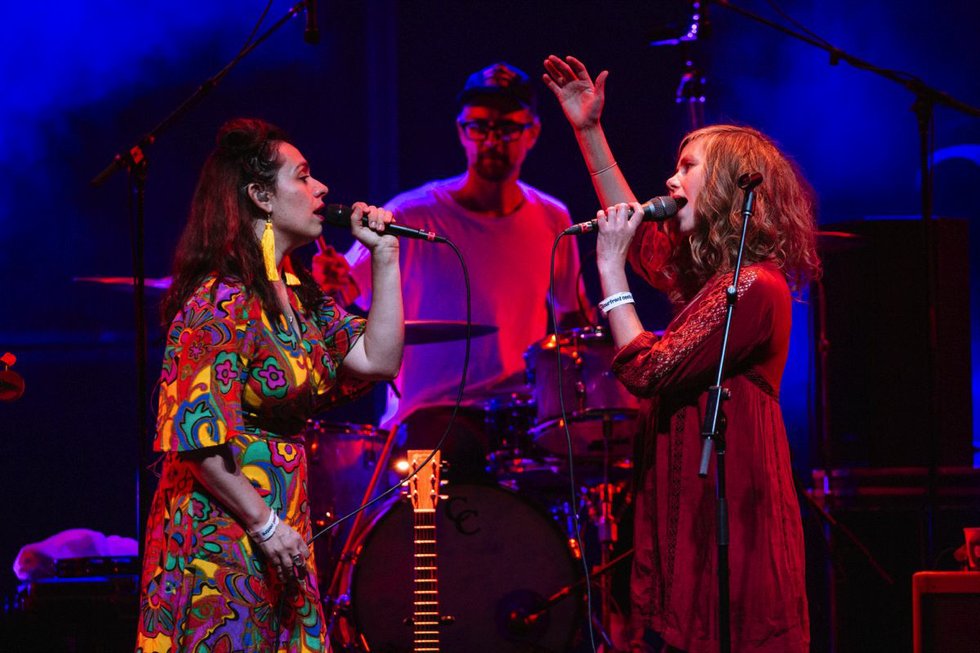 For BSS that still means there’s anywhere from eight to 12 people onstage at any given time – often four or five guitars, a horn section, sometimes strings, plus drums, bass and a ton of people hitting tambourines or clapping while waiting for their turn to sing. But despite the crowded stage, the band still had some special guests waiting in the wings. 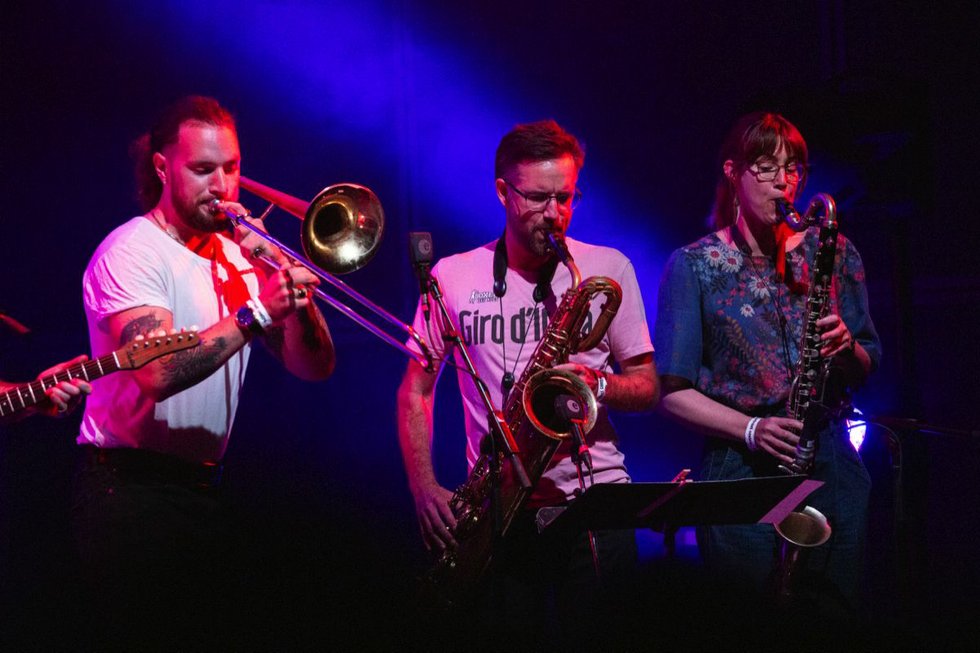 Fans packed into the free outdoor show and even climbed a nearby bridge to get vantage points and occasionally set off Roman candles and waved sparklers, competing with the official fireworks going off in the distance. (“What was the hell was that?” Kevin Drew deadpanned when a firework hit in the gap between their second and third song.) The smell of roasted corn wafted through the air.

After a handful of newer songs and a couple of classics (7/4 Shoreline and Ibi Dreams Of Pavement), the band brought out local singer/songwriter Charlotte Cornfield, who is also a collaborator and protégé of Drew and Brendan Canning. BSS backed her on her own song, Silver Civic, and it was a pleasant surprise to hear the understated gem on such a big stage. Drew referred to BSS as “your hometown band” a few times throughout the show, and ceding the spotlight to younger artists who can benefit from it is a good way to keep the title. 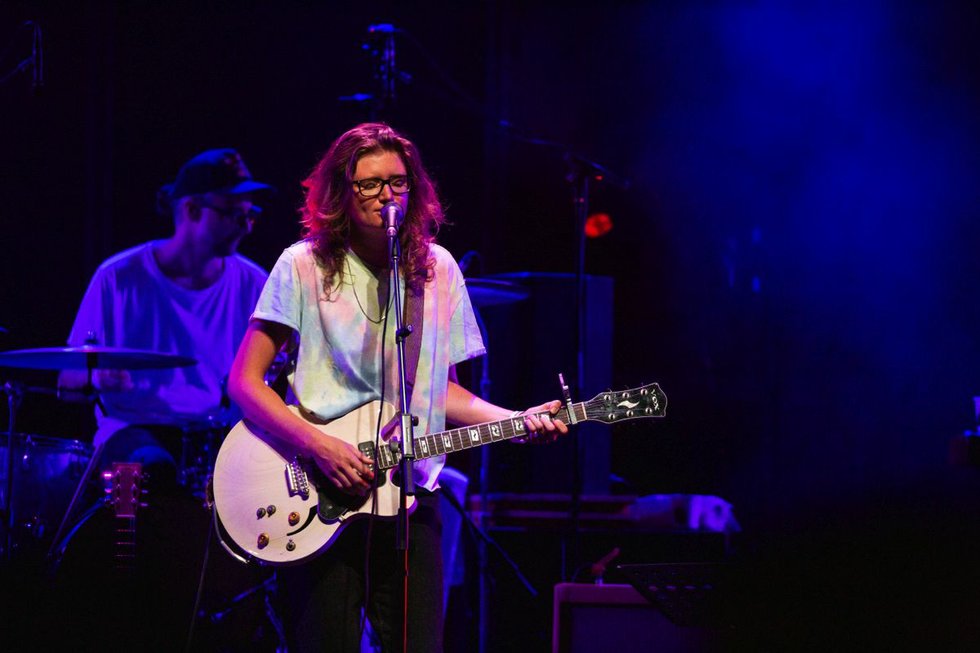 Fellow guests Kim Stockwood and Damhnait Doyle were on the other end of the spectrum – their folk-pop band Shaye actually broke up a decade ago – but they still got the BSS house band treatment on their 2006 song You’re Not Alone. Later, Peter Dreimanis and Leah Fay, the dual singers of July Talk, also joined the band for the most prototypically Canadian moment of the night: a cover of Arcade Fire’s Empty Room. 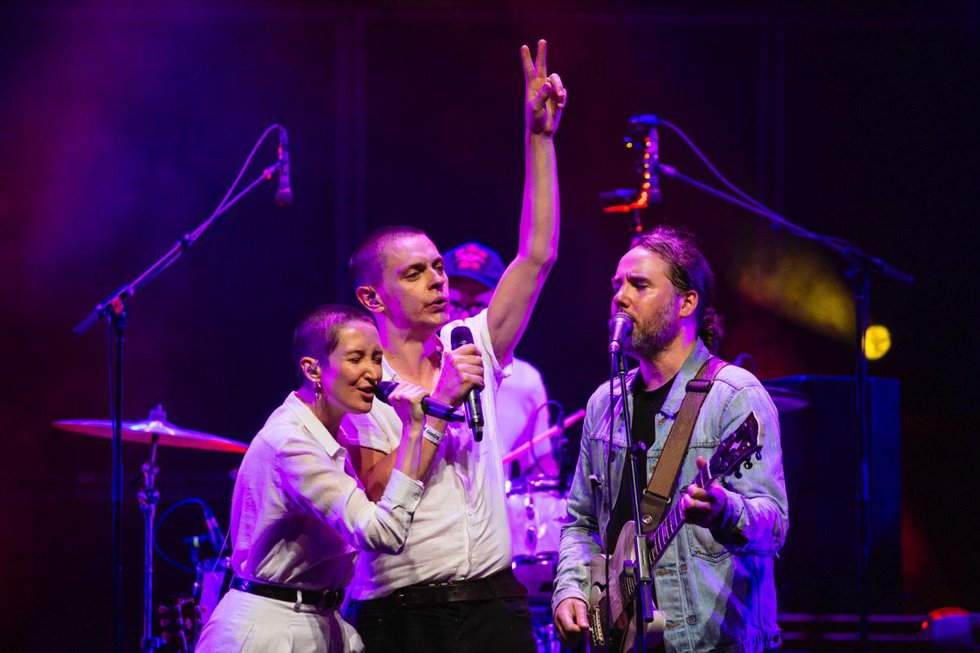 Of course, feel-good 00s indie rock is only one conception of Canadiana, and like Drew’s late collaborator Gord Downie, the band didn’t indulge in the patriotism of the day without questioning its meaning. They swelled to 14 people as they welcomed all seven members of London, Ontario, psych band WHOOP-Szo, who were proud to Indigenize the stage, as they put it on Twitter. They said one of the other musicians at the show borrowed one of their members to watch their baby backstage, which Engle joked was BSS in a nutshell. 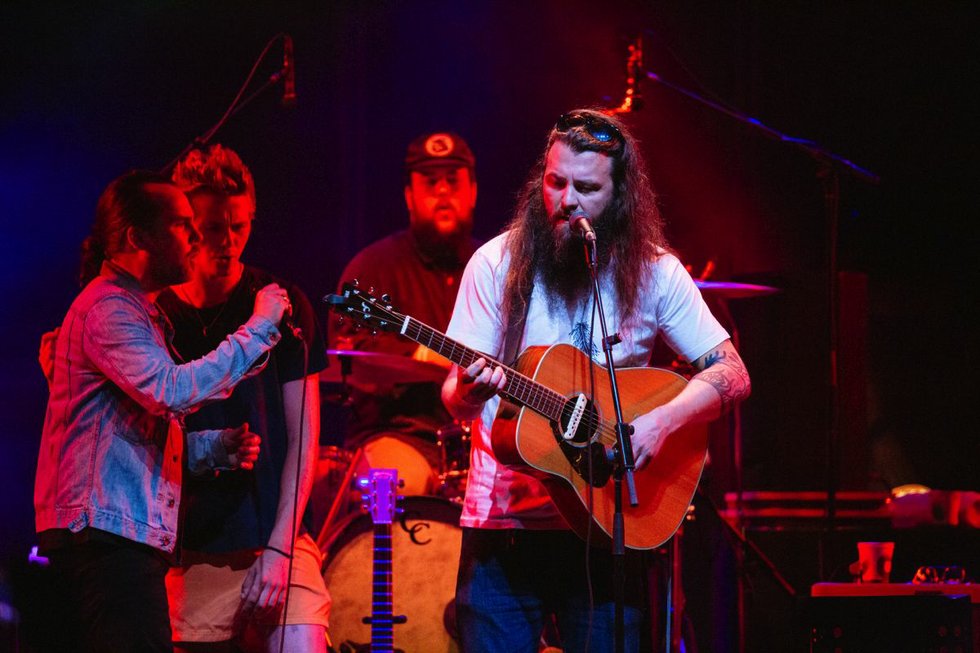 They didn’t have Metric’s Haines for what is always her show-stopping moment, the swelling and emotional Anthems For A Seventeen-Year-Old Girl, but the song was imbued with a whole new meaning. Charles Spearin introduced Syrian musicians Esmaeel Abofakher, Rahaf Alakbanyi, Iman Abdulrazzak and Julia Al Yazji. Singer Al Yazhi, a 15-year-old refugee, gave a shout-out to her father, who was watching a live-stream of the concert from Damascus. It was a powerful highlight, especially given the nature of the holiday. 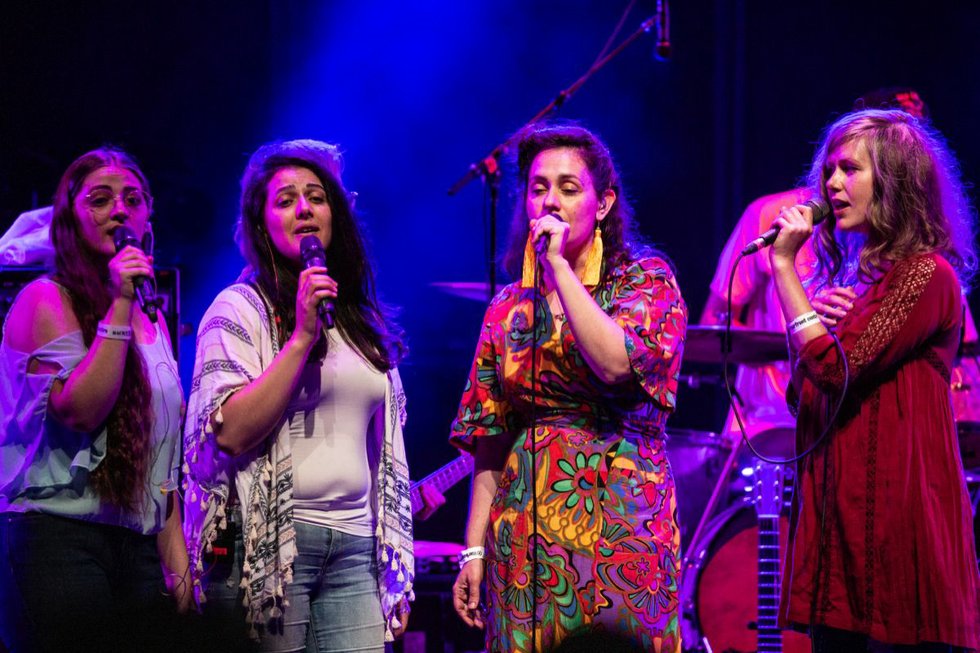 Anthems For A Seventeen-Year Old Girl with actual teenagers.

BSS brought everyone back onstage for an encore performance of KC Accidental and Meet Me In The Basement, and seeing and hearing 20-plus people behind the song gave Drew’s grandiose-sounding pseudo-gibberish some extra weight. “We’ve gotta do it for the spirit purposes,” he repeated a few times in a row before everyone took a big bow. “Don’t let them steal your reflection.”

“We’re going to go away for a while because we’ve been around for a while,” Drew said before the set was over. This wouldn’t be the band’s first hiatus or even their first breakup, so it didn’t elicit the shock it might have. But even if they do call it quits, the band will always have the Harbourfront Centre. 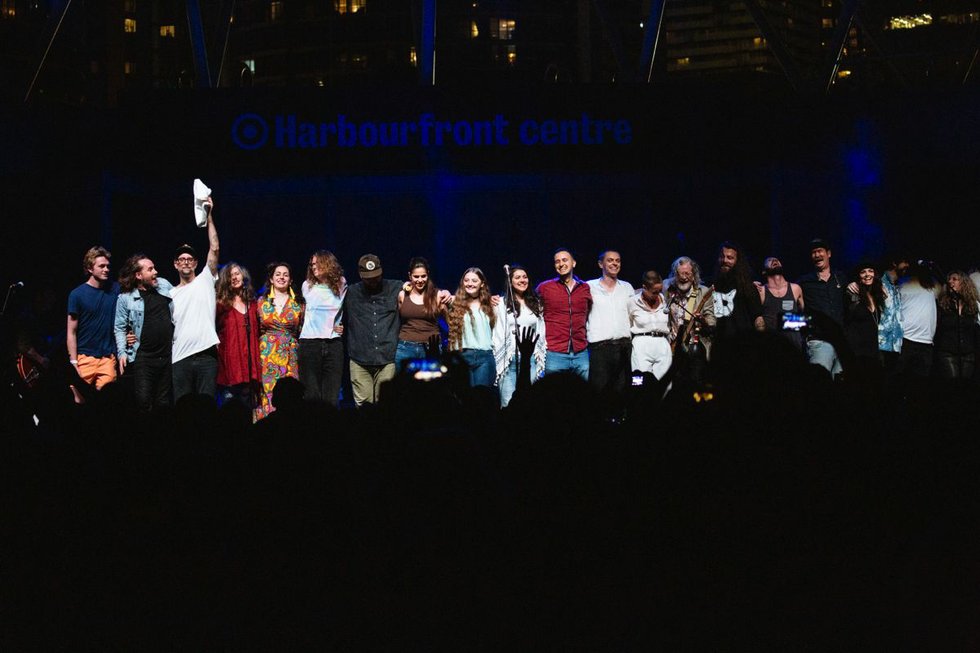 Take a bow, everyone.