NOW MagazineMusicConcert reviewsCanadian Music Week 2019: the best and worst of the weekend

Canadian Music Week 2019: the best and worst of the weekend 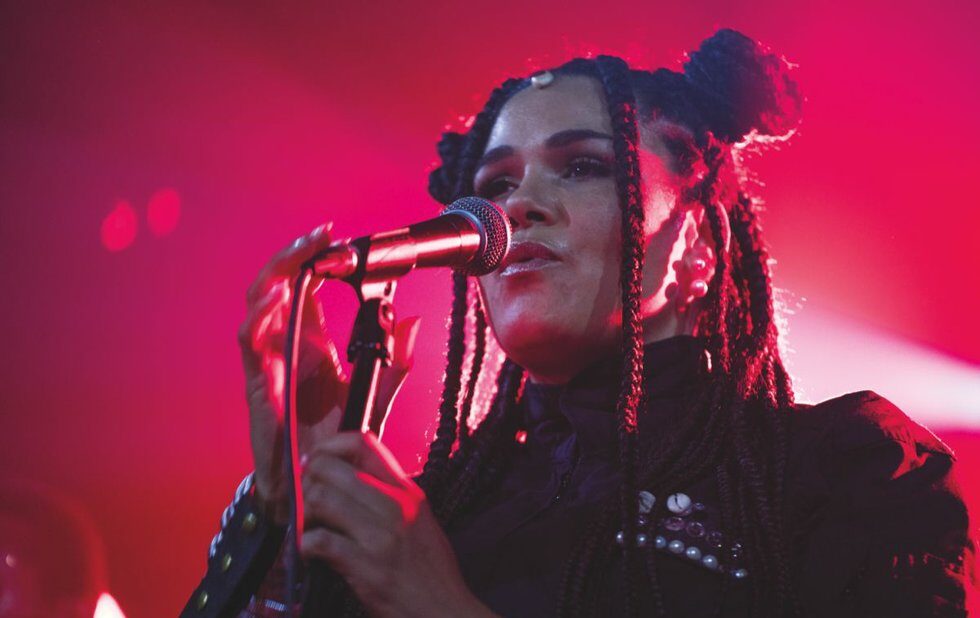 Find our reviews of the first half of CMW 2019 here.

THE MAHOTELLA QUEENS at the Hideout, Friday, May 10. Rating: NNN

The Mahotella Queens were the highlight of CMW’s spotlight on South Africa showcase. Formed in 1964, the treasures have withstood the country’s political and social turbulence, in various incarnations, for decades and represent the pride and glory of its indigenous Zulu culture. Hilda Tloubatla, only 22 years old when the band formed, is now their charismatic centre, performing with Nobesuthu Mbadu and younger later recruit Amanda Nkosi. Harmonizing, their three voices sounded more like seven. It was an instant communal celebration, inspiring audience members to dance, sing and even raise a few tiny South African flags. However, a far too short set and no live band to support their masterful sound did a disservice to an outfit that deserved more. CHAKA V. GRIER

TEKE::TEKE at the Garrison, Friday, May 10. Rating: NNNN

Montreal’s TEKE::TEKE fluctuated between Takeshi Terauchi-inspired Japanese surf rock, flute-infused psychedelia and horror movie soundtrack sounds, easily switching song by song. The first half of the seven-piece band’s set was instrumental, anchored by band founder Serge Nakauchi Pelletier’s riveting guitar-picking, complemented by shoegazey guitar, trombones, keyboards, flutes, cowbells, shakers and a variety of wooden pipes. But the songs felt more alive in the second half when vocalist Maya Kuroki began singing in Japanese, her voice sometimes evoking the sultry sounds of a lounge singer or the demonic protagonist in an anime. Needless to say, she has range. SAMANTHA EDWARDS 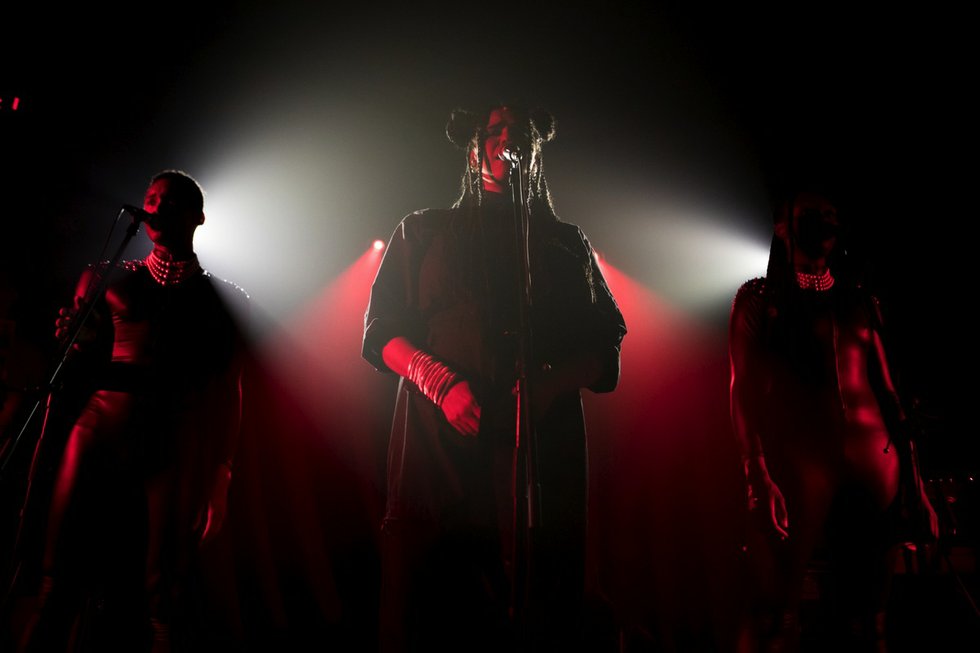 Even with her slightly scaled-back festival set, Zaki Ibrahim’s live show is fully considered and fully realized – a mystical mini-epic. Flanked by two backup singer/dancers in black bodysuits – Toronto’s James Baley and Kyla Charter, both talented singer/songwriters in their own right – the Canadian/South African singer vogued and shuffled through light choreography and belted cosmic electro-soul and funk grooves that recalled both the best of the 80s/90s and some imagined near future. Her magnetic set left the crowd wanting more. Shay Lia – whose set time was flipped with Ibrahim’s last-minute – played next, and unfortunately for the lower-key and vibier Montreal R&B singer, Ibrahim was a tough act to follow. RICHARD TRAPUNSKI

Zaki Ibrahim will play the AGO’s new All Hours party on May 25. 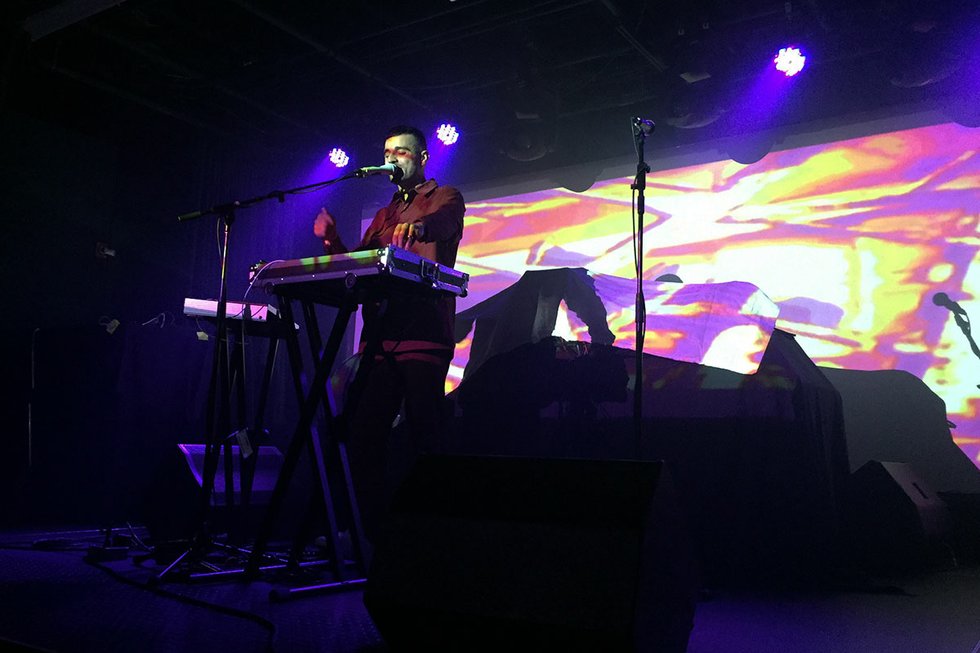 Datsunn was a highlight of Subtle Blend’s late-night party at the Drake.

DATSUNN at the Drake Hotel, Friday, May 10. Rating: NNNN

Hip-hop industry leaders gathered for this afternoon panel to discuss the global state of the world’s most popular music genre, moderated by publicist and author Dalton Higgins. A common thread was the way the rise of streaming has made the music accessible worldwide. Grammy-winning producer Bryan Michael Cox recounted the rabid hip-hop fandom he’s found in Copenhagen: “There’s not many of us out there. It’s a very blond hair, blue-eyed town, but they really study hip-hop. They had me Googling facts to keep up.” XL Records A&R consultant Samantha O’Connor, meanwhile, described a thriving hip-hop community in Finland. CEO of Adella Thomas Entertainment Rico Brooks also recounted his experience in Tokyo: “I saw kids rapping along to American hip-hop. But when I tried to talk to them after, I realized they didn’t know English. They just know the words to the songs.” CLAUDIA MCNEILLY

Amsterdam BrewHouse was a strange venue for Saint Catharines singer/songwriter Jasmine June. She was surrounded by dinner tables and lights far too bright for the soulful music she performed. But despite these challenges, her big band, even bigger voice and passionate stage presence shone through the odd space. Weaving between original music and smart cover choices that she called personally meaningful – like Demi Lovato’s Sober, Shawn Mendes’s Bad Reputation and a moving version of Sam Smith’s Him (Her) – she crisscrossed pop, neo-soul, R&B, even jazz (with some well-placed scats) demonstrating serious talent that suggests big things to come. CVG 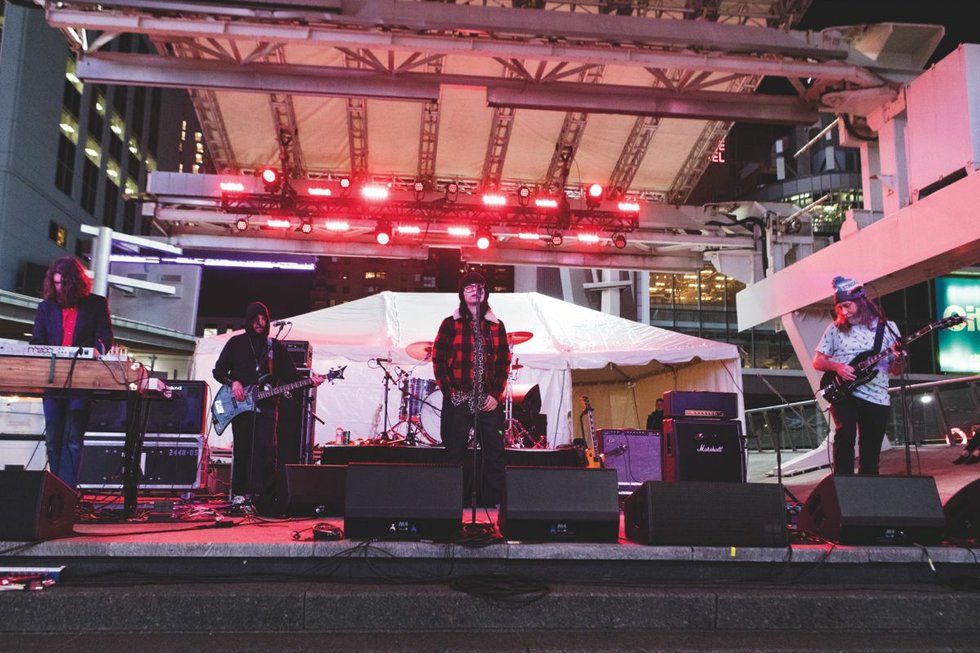 CMW used to take place in March, but being in May makes Yonge-Dundas Square as viable a venue as for its rival fest NXNE – or at least it should. Temperatures felt more like November as Black Mountain took the stage, and the crowd was sparse. The band’s crunchy stoner rock riffs and soaring synths could have been the perfect soundtrack for a generator-party-style outdoor smoke-out – this was the first festival since legalization, after all – but instead the headlining set of the billed “Rock Out At YDS” felt weirdly haphazard and subdued. Even CMW staff’s attempt to pass out beach balls fell flat. The band’s heavy psych still sounded huge, though, and earned a few devil horns from the impressed crowd by the end. RT

BADGE EPOQUE ENSEMBLE at the Garrison, Saturday, May 11. Rating: NNNNN

If the audience’s brains weren’t completely scrambled by the dream local bill of Carl Didur, Isla Craig and Ice Cream, then Badge Époque Ensemble were more than happy to finish the job. The jazzy, progressive instrumental sextet are experts in groove, building each one as a vessel for adventurous melodies that snake from restless funk to wild explosions of dramatic psych. With all of the whooping, whistling responses of approval, song after song, by the packed crowd, it felt like being in the room for a classic live album that doesn’t exist – the kind of show people will regret having missed for years to come. MICHAEL RANCIC

CASEY MQ at the Baby G, Saturday, May 11. Rating: NNNN

Casey MQ’s Nudes EP hews toward late-night confession while chasing rhythms that sashay through the night. Here, the Berlin-based Toronto singer/producer emphasized those foundations with a series of pop covers and interpolations, opening with a sombre rendition of S Club 7’s Never Had A Dream Come True and a propulsive, pitched-up No Air remix that extirpated Chris Brown so Jordin Sparks could soar, uncomplicated, later re-approaching My Chemical Romance’s Helena and Rihanna’s Consideration. Perfect for midnight in a tiny room, the crowd danced all over it, and Casey MQ even got into the action, stepping into the pit to lean into his own song Glossy Lips. TOM BEEDHAM

PRETTYBOY at the Rivoli, Sunday, May 12. Rating: NNNN

This local alt-rock quartet describe themselves as “bratty punk,” but the label “uninhibited” could apply just as easily. There was something to watch with each member of the group, whether it was drummer Izzy haranguing the kit in front of her or the way vocalist Kirsten made full use of the stage by splaying out over its steps face down while still managing to belt out her lines. They’re a wild and intense bunch and have a strong set of songs to match. MR 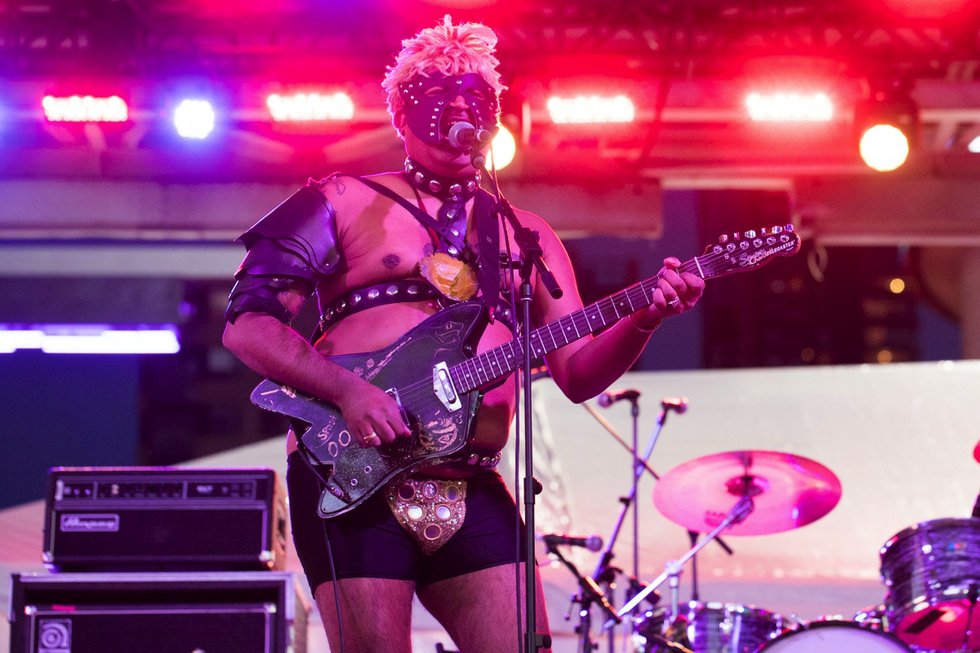