At the DOOM show, there were so many problems and not enough rapping 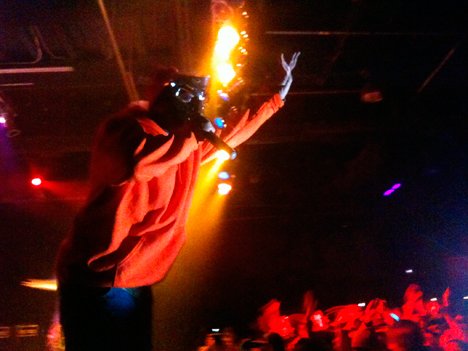 It was well past midnight when a slim, energetic masked rapper hopped on stage with a microphone, though he was clearly not using it. This was not DOOM, the night’s headlining act, but an unbelievably bad look-alike.

This means neither of the two rappers the audience paid $40-something admission to see would show up.

This show had been fraught with enough problems. It was first delayed a month ago, then main draw Mos Def pulled out at the last minute for reasons unknown (some sort of feud?), and then there was a strong possibility that DOOM would not actually be there.

Late to take the stage as it was, the DOOM impostor was not going to go over well with the already agitated crowd, who just moments before were throwing crushed beer cans at the stage.

But, keeping in spirit with the rapper’s irreverent style, it was hoax. The real DOOM, who owns a slight paunch and isn’t really known for jumping around stage, swaggered out behind his ringer after the boos began.

It apparently it took a feat of strength for that to even happen. The show’s promoter, via Twitter: “In over 15 years as a promoter, [I’ve] never worked so hard as I did last night to get Doom on that stage in Toronto.”

The DOOM performance itself, minus the circus surrounding the show, was amazing. He’s like a rhyme-spitting machine, or a little kid who never stops talking. His marble-mouthed run-on sentences never slowed the entire concert. Well, except for when the sound system conked out for about ten minutes.

But even if the metal faced act had been flawless, it still felt like an opening act. The main course on this meal was missing.[rssbreak]