Tragic-wave duo Deb Demure and Mona D are non-gendered vessels, redefining what it means to be a performer 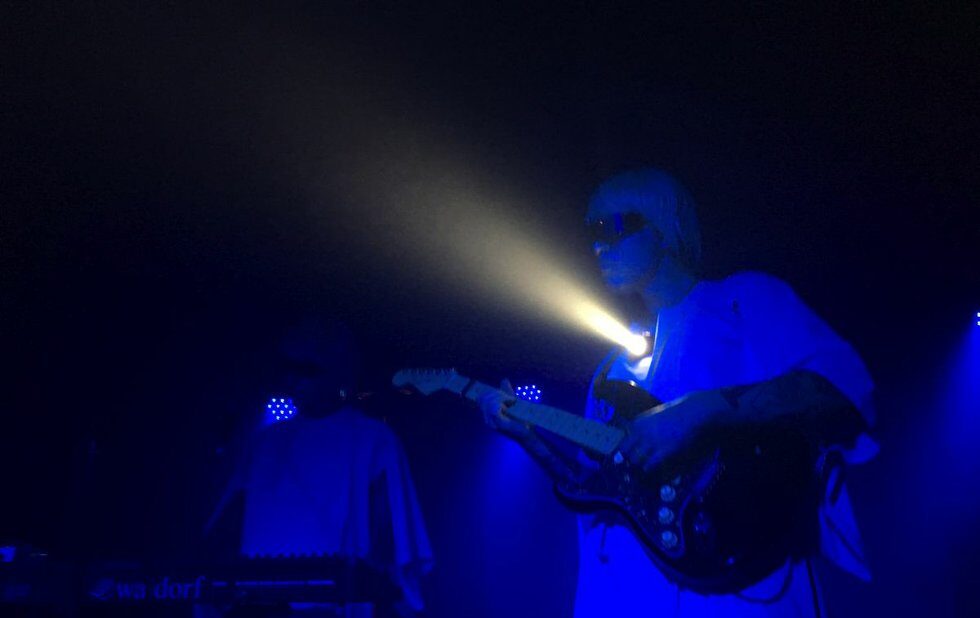 Drab Majesty turned the Baby G into a post-punk church service. Though it was not burdened by piety, their performance evoked awe and attention.

Deb Demure walked on stage in a long white robe, dark sunglasses and signature shock of platinum hair and silvery makeup, as though commanding a more glorious and glamorous space. While Mona D played atmospheric chords on a Waldorf synthesizer, Demure waved burning sage over the stage and front rows.

Then, as though performing an invocation, Demure stepped in front of the mic and chanted, “I come from space,” before picking up a guitar and launching into driving, haunting chords and deep, resonant vocals.

The onstage personas of Demure and Mona D are intended to be non-gendered vessels channeling music from another source. Demure doesn’t take ownership of the songwriting, claiming the songs are received.

The band’s sound is a self-defined combination of tragic wave and mid-fi. It’s reminiscent of goth classics like the Cure and Siouxsie and the Banshees mixed with the relentless, driving force of the Soft Moon and Trentemøller’s penchant for sound variation. It’s a dramatic, but fun, experiment, avoiding the ultra-serious conventions of darkwave. Demure smiled benevolently throughout the performance.

By neither performing a gender nor attaching ego to their music, Drab Majesty change the way audiences experience a show, and shift what it means to be a performer.

Whether you think the towering 6′-4″ Demure in a blonde wig and silvery face makeup looks like a priestly Andy Warhol or a cosmic-goddess version of Blade Runner’s Pris is immaterial. The night’s demonstration seemed designed to fulfill contemporary audience’s desires for meaningful, or at least memorable, offscreen experiences.

Partway through the set, Demure even switched on an amulet necklace that shone a bright light into the crowd, cutting through the smoke machine fog as if to forge a deeper connection.

Unfortunately the tribute single wasn’t played during this set. It’s unclear whether Drab Majesty want to focus on the future instead of looking at the past or if the set was cut short. The audience, though appreciative, expressed its admiration throughout the show with restrained and solemn head-nods. There was no encore.

We can only hope for a longer and grander set the next time Drab Majesty touches down for another otherworldly demonstration.