The eighth edition also included tons of Atlanta hit-makers, a couple of wild card guests, and a teachable moment between Drizzy and Tory Lanez 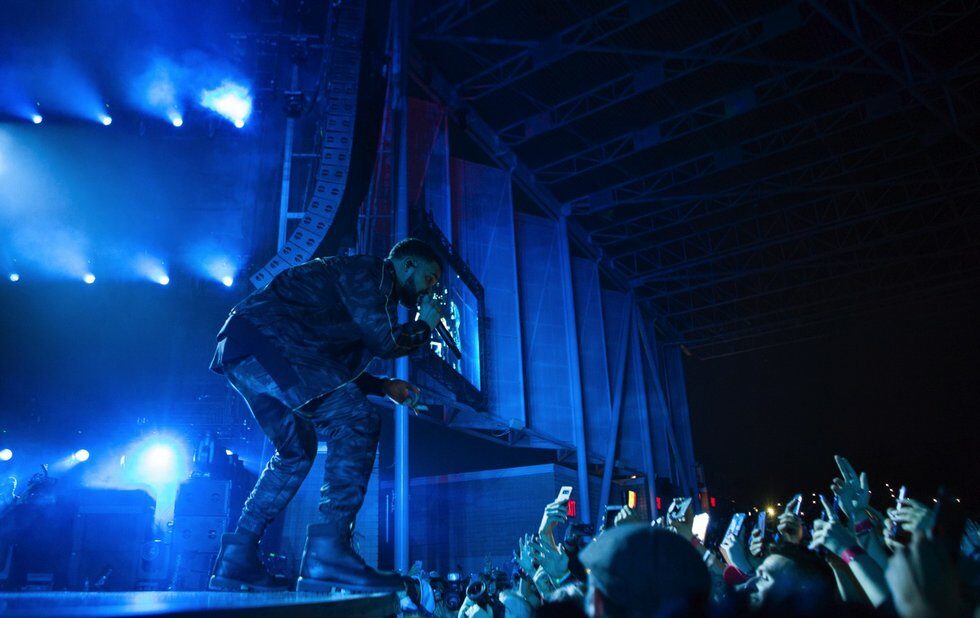 No matter who Drake trotted out as a special guest at his eighth annual OVO Fest, one surprise appearance consistently stole the show: the massive CN Tower replica that loomed over all.

And make no mistake: Drizzy had to do something big.

Last year, he’d diminished OVO Fest’s special summer vibes by moving it from the Molson Amphitheatre – now rebranded as Budweiser Stage – to the Air Canada Centre for two nights and pretending it was OVO Fest rather than two stops on his Summer Sixteen tour. Kanye West and Rihanna made appearances, but it still felt more like an ultra-rehearsed Drake arena show, albeit with benefits.

And then he brought out guests like Cam’Ron, Gucci Mane, Eminem, Fat Joe, Kanye and Rihanna plus many more during the tour’s U.S. leg, leaving Toronto feeling like the main chick at home staring at the phone while her man partied at all hours with New York, Atlanta, Detroit and Los Angeles.

As if to make up for that, this year he gave us a CN Tower replica.

Given how much Torontonians love those giant letters spelling out “Toronto” at Nathan Phillips Square and given our affection for that giant rubber duck, an oversized recreation of the CN Tower is just what we didn’t know we’d even wanted.

Naturally, recreating the CN Tower onstage meant Drizzy could open the show by sitting on top of it just like on his Views record sleeve. (Imagine being a fly on the wall during the OVO Fest planning meeting when that light bulb went off.)

It was certainly a moment when the curtain dropped, revealing the bulbous civic landmark glowing blue while the real one could be seen through a window to the right. The sample of Hiatus Kaiyote’s Building A Ladder from Free Smoke – the opener on recent full-length More Life – played as Drake sat there drinking in the scene.

He kept the hard-hitting beats coming with No Long Talk, descending from the CN Tower to perform 6ix anthem Know Yourself and club jam Jumpman.

OVO Fest is all about the guests and it wasn’t a long wait for the first one. Rising Atlanta MC Playboi Carti appeared 15 minutes into Drake’s set and did his current hits Magnolia and wokeuplikethis*. In fact, Drake pretty much ceded the show’s first hour over to guests, including another act from Atlanta: duo Rae Sremmurd, who performed hit Black Beatles and new song Perplexing Pegasus.

When Toronto rapper Tory Lanez raced out during the medley of dancehall-influenced pop hits (Blem, One Dance) to do his remix to Controlla, Drake turned it into a teachable moment. The two have had a long-running beef that apparently became so annoying for Lanez that interviews with him were preceded by a disclaimer from his reps that no Drake questions were allowed or the interview might end early.

“Please take this as an example in your life,” Drake said. “We had problems with each other, we had never even met each other. I met the man and… he’s a great guy!” 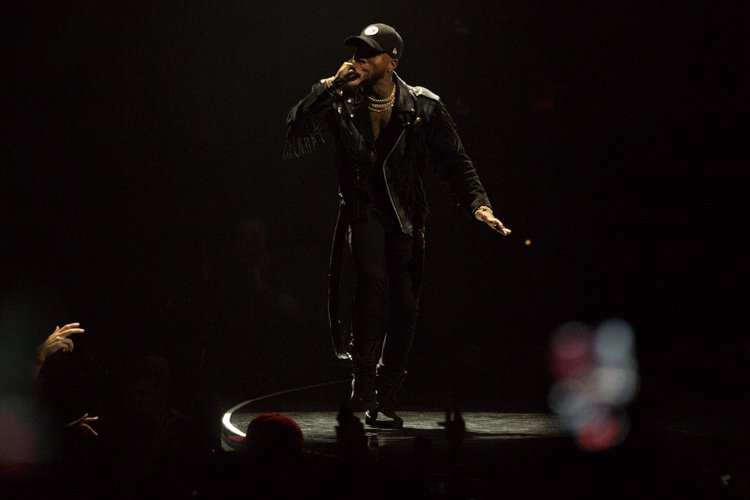 New York rapper Cardi B’s appearance felt like a genuine wild-card cameo – and she was the night’s sole female guest. She did her hit, Bodak Yellow, and when she finished, the huge grin on her face indicated that she was genuinely elated to be there.

Repeat OVO Fest guest French Montana did his single Unforgettable. While not the biggest star, he wasn’t there for the star power anyway. “We’re actually, like, buddies in real life,” Drake informed the crowd.

Trio Migos kept the Atlanta hit-maker theme going, rounding out the first hour with Bad And Boujee and T-Shirt before Drake and Travis Scott joined in for More Life cut Portland, eliciting some of the biggest crowd reaction of the night.

PartyNextDoor was the lone OVO Sound-signed artist to cameo during the main set. He’s the most popular, having scored Billboard hits and penned Rihanna’s number-one single Work, but he’s also the label’s the weakest live performer.

In a series of 20-minute opening sets, the rest of the OVO Sound roster emphasized different strengths: Roy Woods had the showiest dance moves and falsetto, dvsn had the showiest R&B runs and harmonies, and Majid Jordan had the heaviest beats and most polished live show. Party still doesn’t have a lot of stage presence but he has hits, so he kept it brief with upbeat single Not Nice and slow jam Come And See Me.

Drake seized the downtempo mood and followed with a couple of songs that emphasized his singing: Passionfruit and Teenage Fever. As he sang, he clutched the mic stand, fingers crossed and eyes closed, while an unseen band suddenly made its presence felt with shimmering cymbals and bloopy, twinkly keys. Basking in the glow of the fake CN Tower, many of the women in the crowd sang along to the latter song’s chorus – a sample from Jennifer Lopez’s If You Had My Love.

Entering the homestretch, Drake brought out rapper/singer Nelly, still ubiquitous on retro radio thanks to pop singles Hot In Herre and Ride With Me. The songs still hold up, though Nelly let the crowd do most of the singing. He was the evening’s true wild card, more of an influence on Drake than a collaborator or contemporary. These types of guests are usually the most fun at OVO Fest, though they’ve become less frequent over the years as the show has become a snapshot of the hip-hop charts in a given summer.

The CN Tower lit up with lasers for The Weeknd’s return. Now a massive superstar in his own right, he was the opening act at OVO Fest in 2011 when Drake was spending the summer in Toronto recording his Take Care album, which included several Weeknd collaborations, of which they performed Crew Love. Before he left the stage, Drake called back to that summer.

“I don’t want to do this to you onstage, but the OVOXO project has to happen at some point,” Drake said. The Weeknd left silently.

A weird thing about OVO Fest is that Drake will often pull a guest aside for a bit of banter, but they rarely seem to muster more than a smile and nod in response. Even Lanez kept it cute. Maybe they were too busy tripping on the life-size CN Tower to talk? Or were they afraid of turning into a bad headline? Makes you long for the unguarded verbosity of Kanye West, who announced his own yet-to-be-realized joint album with Drake at last year’s OVO Fest.

For the climax, Drake brought out long-time friend and recent OVO Sound signee Baka for Live Up To My Name and Gyalchester. You could tell they love bouncing around onstage together, performing those songs. There’s a chemistry between them that no superstar acquaintance can replicate.

He ended the show by announcing that he’s going to hang out in town and record a new album. Behind him, a giant fireball on a screen framed the CN Tower set in strangely eerie Armageddon-like image. Earlier in the night he’d delivered a speech about how much he does for the city. He spends money out of his own pocket to organize OVO Fest and doesn’t make any money on it, he said. He also asked 19 companies to build the CN Tower and 19 said no, but then the 20th said yes.

Eight years in, it’s odd to think he still has to remind people how much he loves Toronto. No other artist seems to crave the love of Toronto the way Drake does. A few times during the show he had to goad the audience into turning up the volume. Did we not cheer loud enough? Looking at that CN Tower set, you wonder if Drake has Toronto on lock or if it’s the other way around. 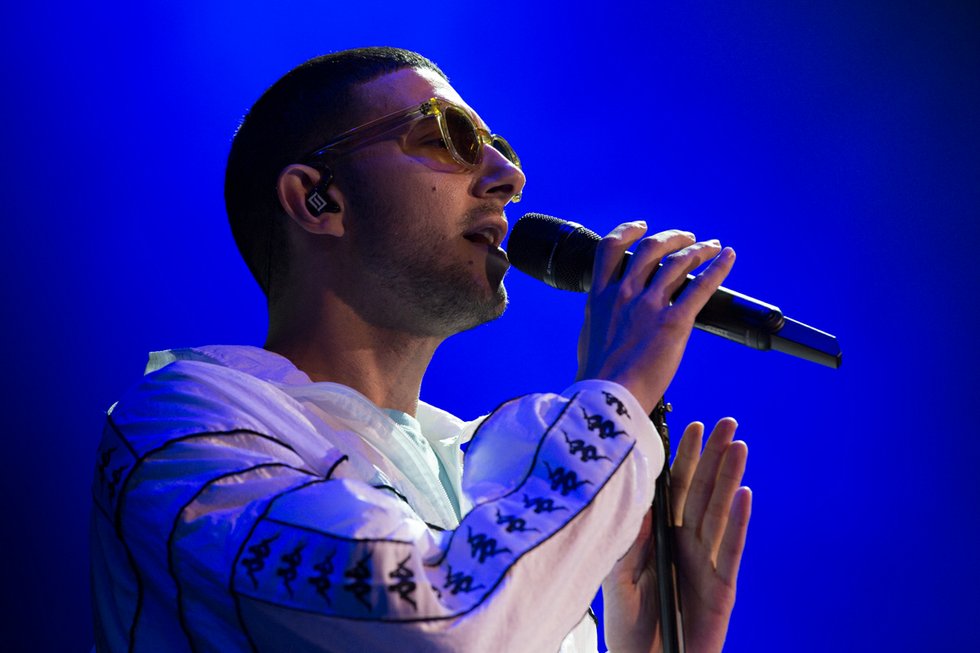 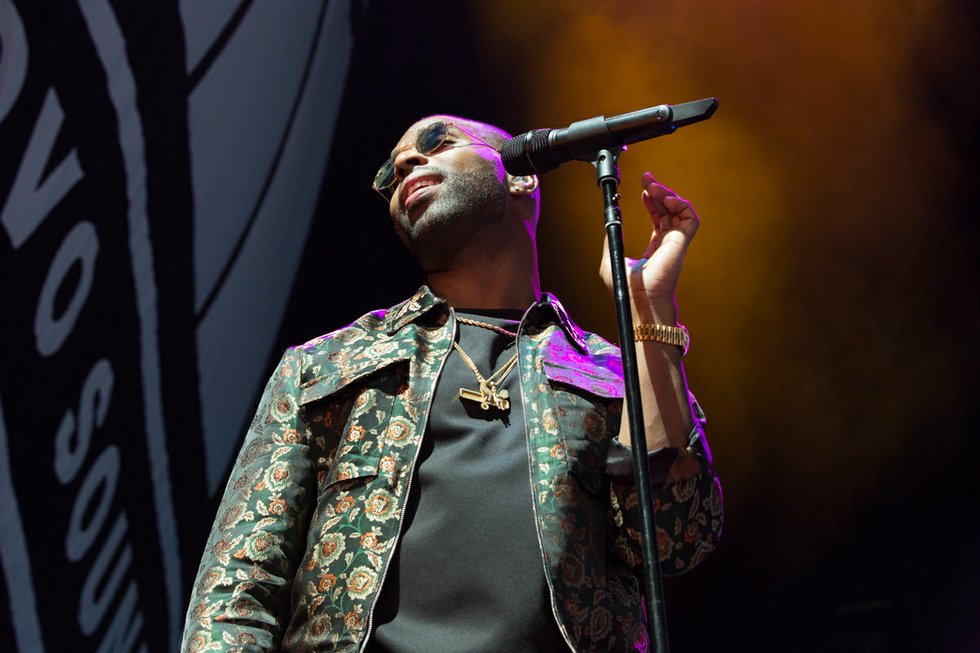 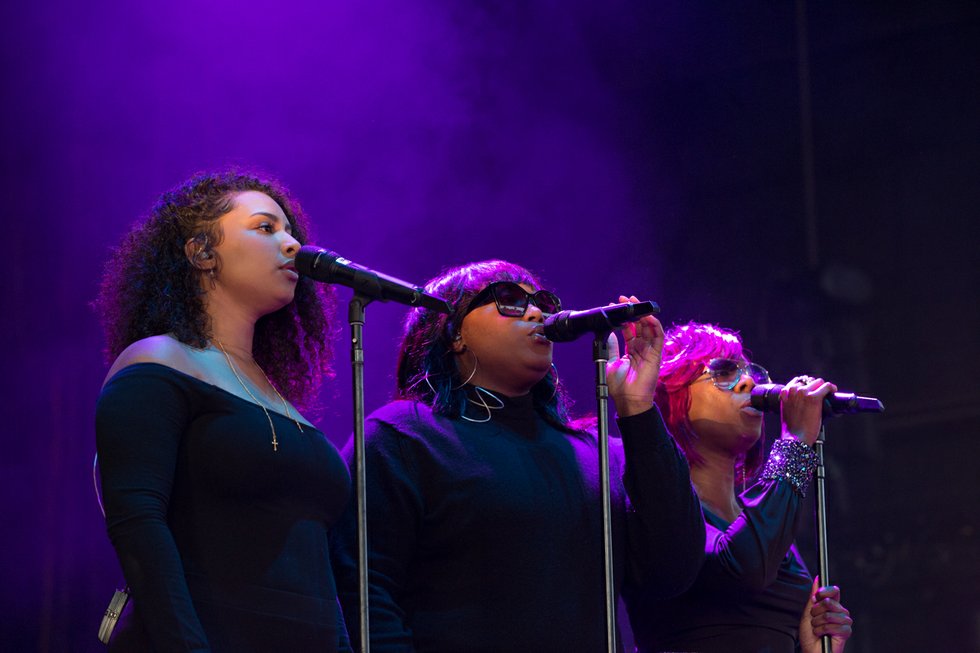 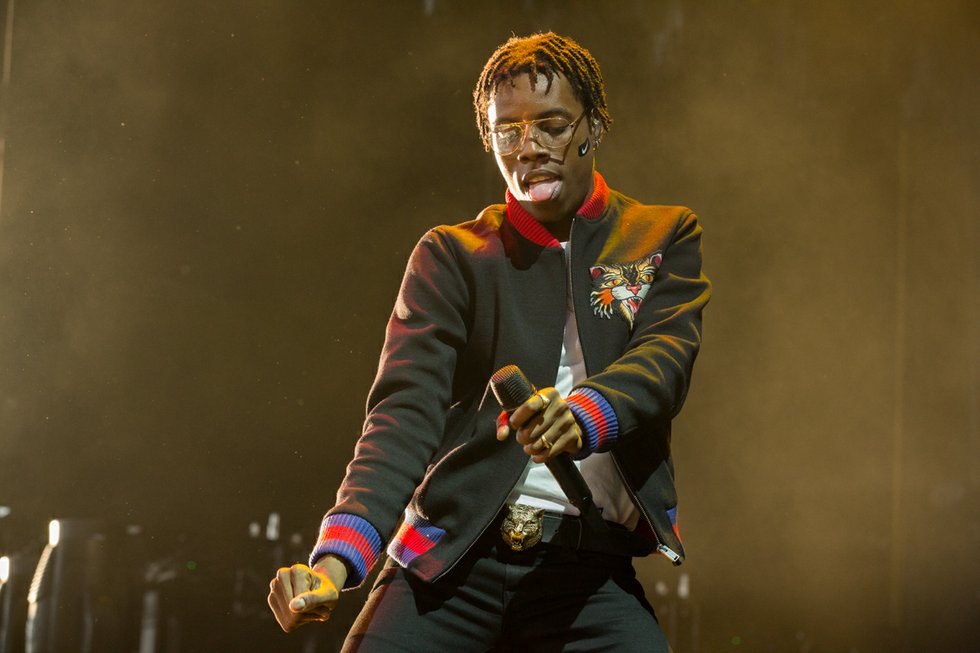 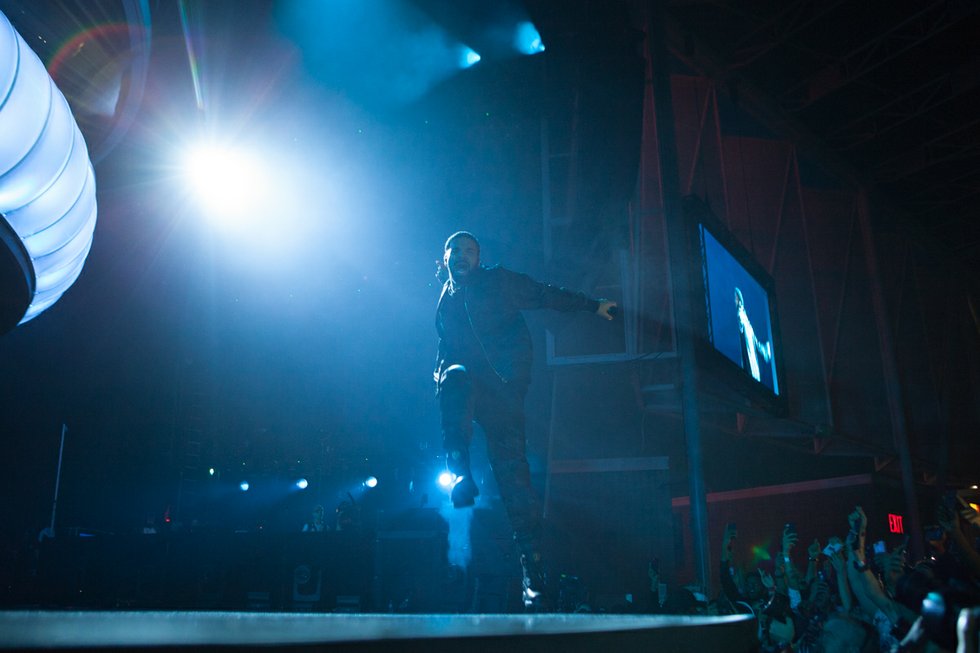 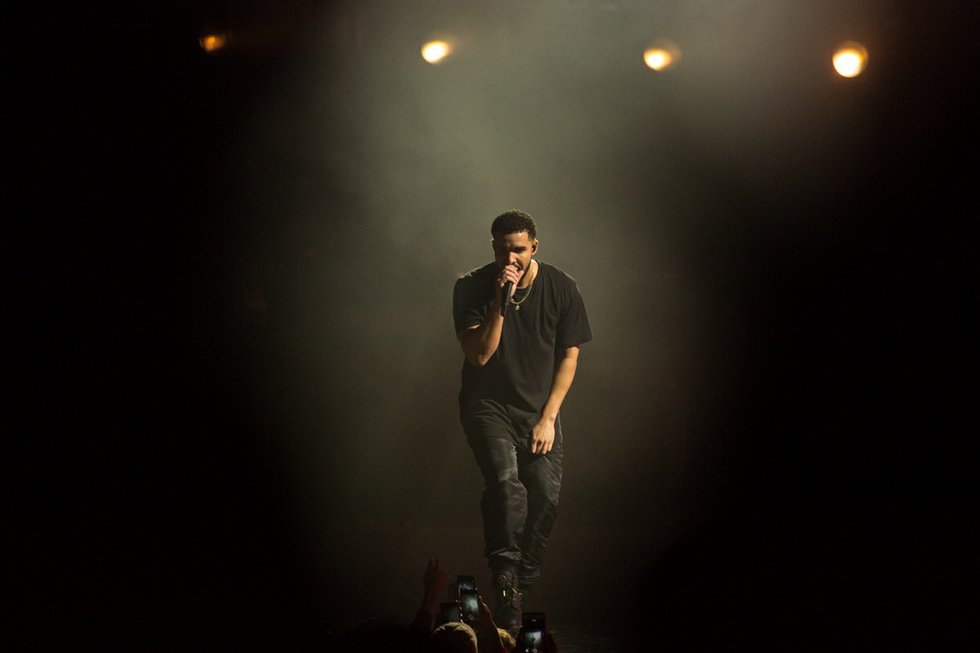 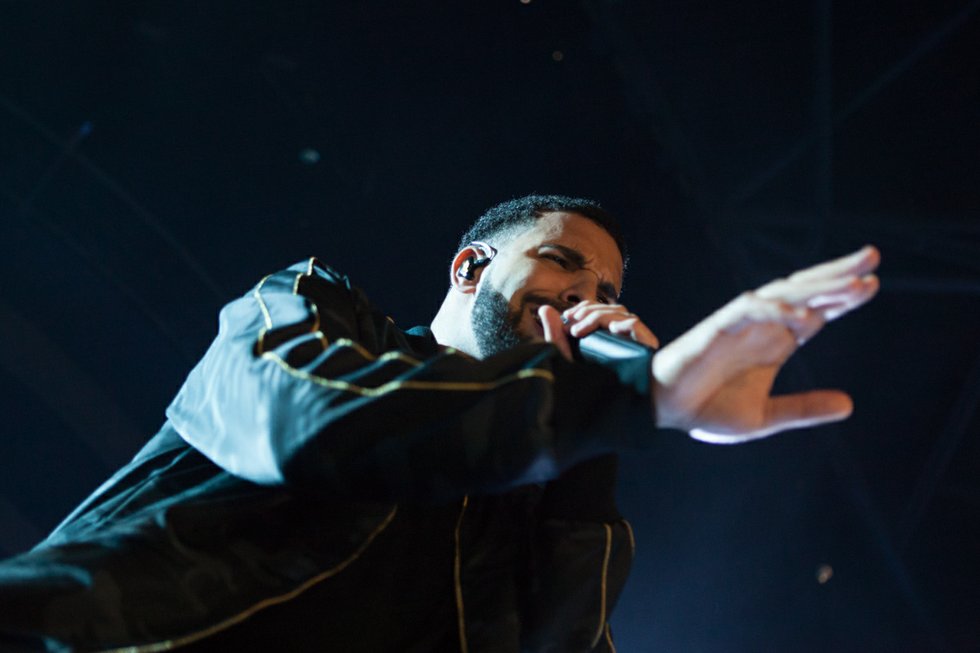