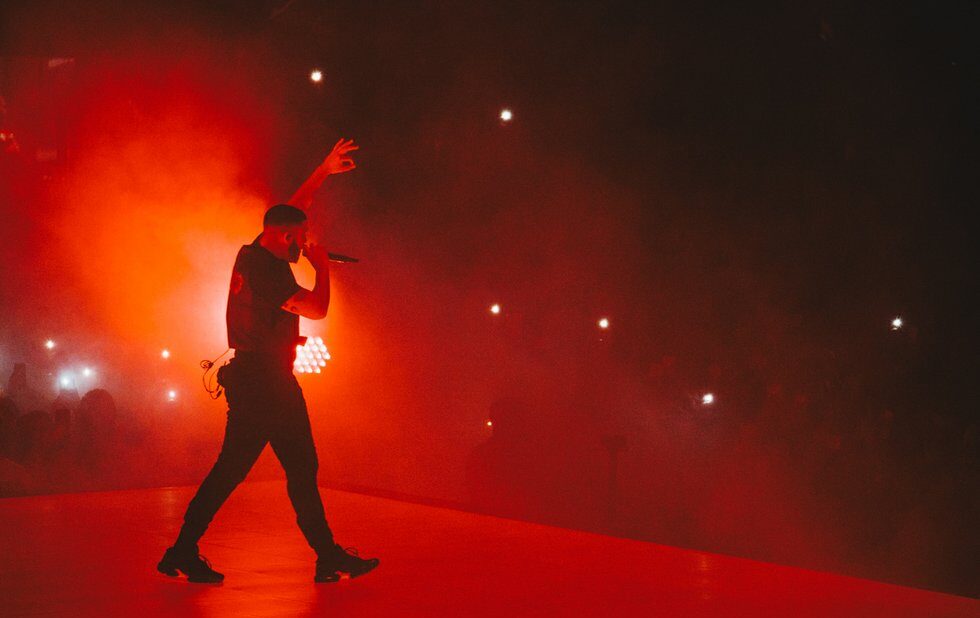 For the first time in nine years, this summer has no OVO Fest.

Last night, Drake maintained his tradition of throwing a hometown Toronto blowout in August, but instead of his usual headline-making collection of “how did he get them!?” style special guests, it was just a stop on his Aubrey & The Three Migos tour.

There were some people online holding out hope that Drake would announce something last minute, but as the date approached and the three Scotiabank Arena dates were pushed back, that seemed less and less likely. Then, on Monday (August 20), what was meant to be the first Toronto show was postponed again. Official word was “circumstances beyond our control,” but there was speculation it had more to do with Offset of Migos’ drug charges – the night the show was supposed to happen, Offset and his group-mate Quavo were at the MTV VMAs. Drake, on the other hand, Drake was visiting an 11-year-old fan in a Chicago hospital, making sure to say into the camera, “I cancelled a concert so I could come and see you, to be honest with you.” 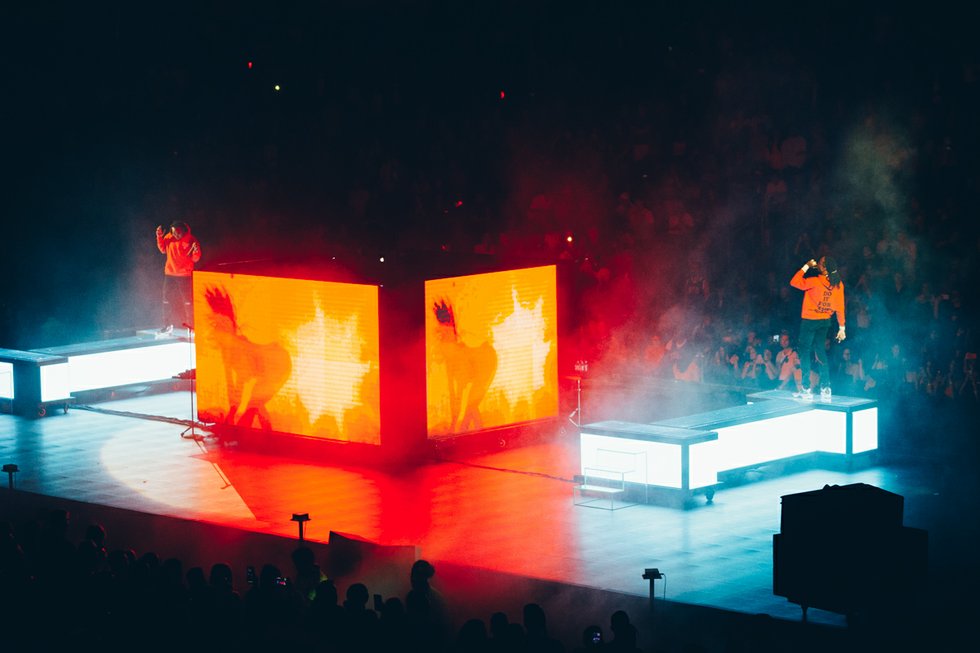 It seems Offset didn’t make it over the border anyway. On the day-late first Toronto tour stop, the rapper was conspicuously absent. After an opening set from local OVO rapper Roy Woods, Migos played without him. No one mentioned why he wasn’t there – or even that he wasn’t there – but the two remaining MCs, Quavo and Takeoff, along with a DJ/hype man, did a good job of amping up the crowd anyway. The Atlanta group ran through a set of turn-up anthems – Fight Night, Ric Flair Drip, Bad and Boujee, Narcos (with “straight out Toronto” subbed for “straight out the jungle”), and a few big hits left out for reasons that would soon reveal themselves.

By the time Drake appeared to a huge ovation from the audience, the high-tech, big-budget production values that initially postponed the tour were very evident. Above a big stage in the middle of the arena that allowed him to perform 360-degrees to everyone in the room, Drake performed the first few songs – all from the new album, Scorpion – behind a translucent screen, almost like a mosquito net, that played projections all around him. When the curtain dropped, there were images below him, too – the stage was basically an LED screen of its own. When he played Know Yourself, and the always crowd-pleasing “running through the 6ix with my woes” line, the stage screen played waves below him as if he was literally walking on water. And given how hard the crowd goes for the superstar rapper, it almost felt that way. 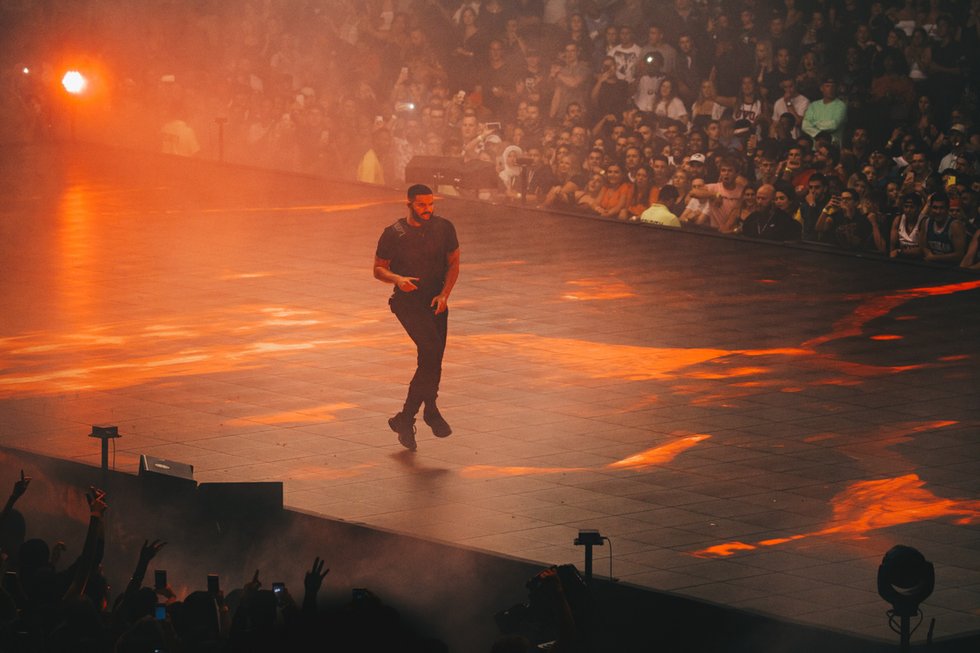 “I’ve been telling everyone on this tour as soon as we get home they’d see the craziest motherfucking crowd,” he said, telling the crowd to go hard because his mother was there. “It’s not just me performing, it’s us performing.” He promised multiple times throughout the night that he’d do something special for the city, which, considering the history of OVO Fest – burying Meek Mill in memes, squashing beef with the Weeknd and Tory Lanez, promising joint albums with Kanye West, somehow drawing out Stevie Wonder – that raised expectations pretty high.

From pure arena show spectacle, he met those expectations. Firework sparks rained down during Jumpman, floating lights like fireflies (or cell phone lights) floated above and around him during the introspective Emotionless, and, most impressively, a full-size yellow Ferrari floated around the arena as he played his Lil Baby collaboration Yes Indeed.

But if you’d read the reports from early shows on the tour in Kansas City, you’d have known that was coming, and the set list (with a few small exceptions) was pretty much identical. He did preface some songs – like a medley of his biggest hits of the past, from Trophies to HYFR, Blessings and way back for Over – with lip service to his home city. He talked about how we’ve had “10 years of our relationship” gathering in the same building, or in the Amphitheatre, but not mentioning the words “OVO Fest.” When he came through the then-ACC in 2016 on his Summer Sixteen tour, he still treated it as OVO Fest, with guests like Eminem, Cam’Ron, Kanye and Rihanna.

The longest guest set came from the opener. As the beat for Walk It Talk It started, Quavo and Takeoff returned and we got the titular Aubrey & The Three Migos collaboration – or, rather, two Migos. After Versace, Drake and Migos’ first collaboration from 2013, played live for the first time together on this tour, Migos got to stick around for a mini set of their own, and when they played Stir Fry, the Chinatown caricatures of the video played out in magnificent colour on the stage below them. 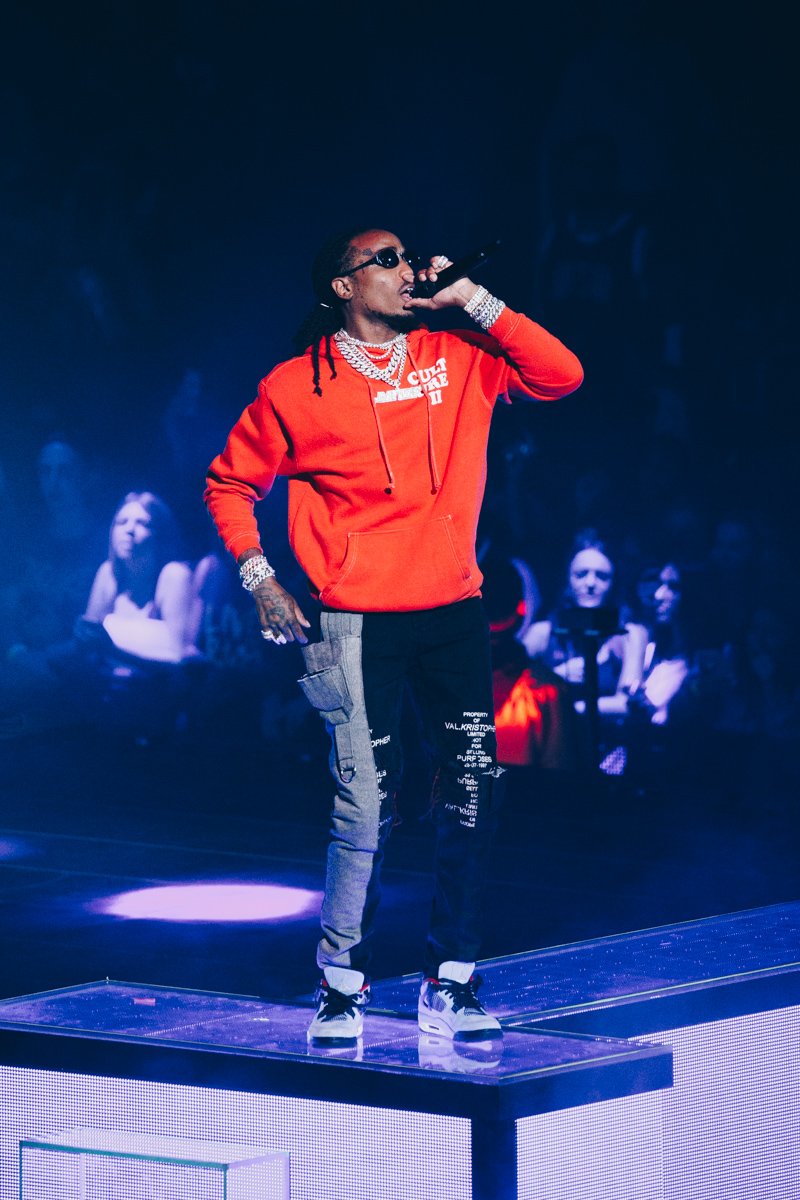 The second half of Drake’s set showed off the versatility he displayed on Scorpion. He played his posthumous Michael Jackson collaboration Don’t Matter To Me on top of MJ-tribute light-up squares that followed his steps. Then he crooned a cover of Jackson’s own hit Rock With You with impressive vocal smoothness. Some R&B slow jams followed, before a short set of dancehall-inflected hits: Controlla, One Dance, Hotline Bling and Rihanna’s Work. After the crowd mostly took over for the higher-energy Fake Love, Drake said “that’s why Toronto will forever be the untouchable city.”

Lazers from the ceiling traced the neon outline of a basketball court, and a net was wheeled in. Former Toronto Raptor point guard and Pickering native Cory Joseph (who wears number 6) shot three different shots to win money on behalf of a pre-chosen fan, like the TV breaks during an NBA game. It was likely just a chance for Drake to catch his breath, but it felt a bit awkward and shoehorned in, and not just because Joseph missed all three. Maybe if it was DeMar.

The final section was the strongest, and contained the one OVO fest-ish surprise: an appearance by Travis Scott to collaborate on Sicko Mode. He too got to stick around and do one of his own songs, Goosebumps. A decent get – Scott is at the top of the charts right now – but not huge compared to previous years. In fact, Scott played at last year’s show.

Arguably, it doesn’t matter. Drake has become a bigger star than many of his guests, and his final set showed why – he’s a full-on pop star, and he has the hits to show for it. He played In My Feelings while fan videos of the Shiggy Challenge meme danced below him on an approximation of a cell phone. He showed how fellow Scorpion songs I’m Upset and Nice For What are already all-timers. And he played a little video of his come-up (the bottom that he started from), with heartwarming cell phone footage from 2009, including a stereotype-feeding crying Aubrey Graham.

After a final performance of God’s Plan, as confetti rained from the ceiling, he finished the show with a little thank you speech, saying he carries the values of his city with him – an espousal of mostly apolitical multiculturalism that’s still about as political as he gets. “You see, tonight, we got 17,000 people inside one building from all races, from all places, and all we are doing is just listening to music, and smoking and drinking — and enjoying our lives. And I want you to know that that’s something that I learned right here in Toronto.”

Even without a lot of special guests, he knows how to make a city feel special. 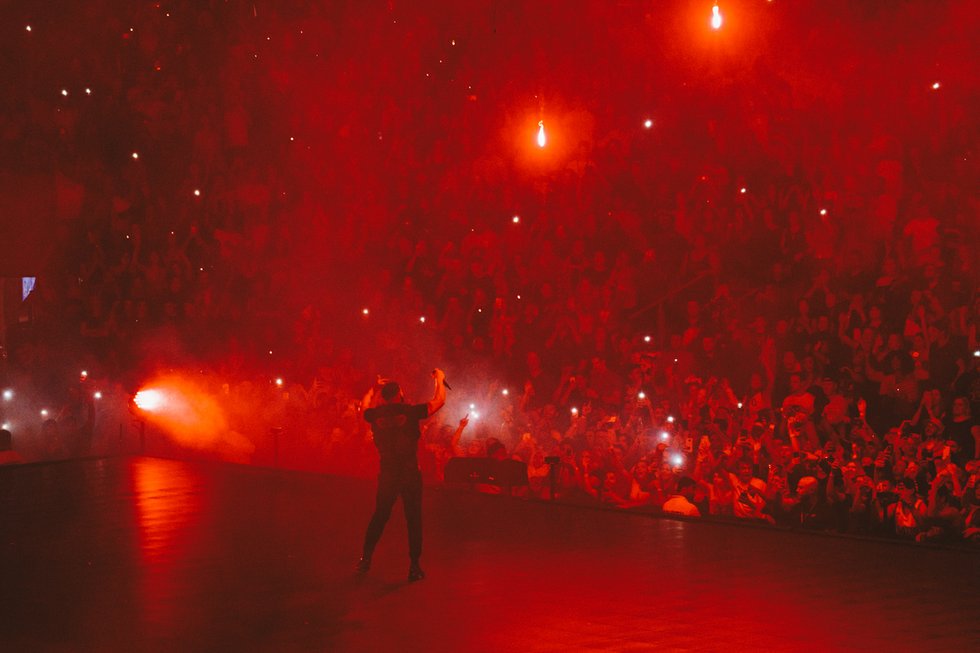