Gucci Mane's first performance in Canada, Blink-182's full-album performance of Enema Of The State, Mariah Carey makes it through the rain and more 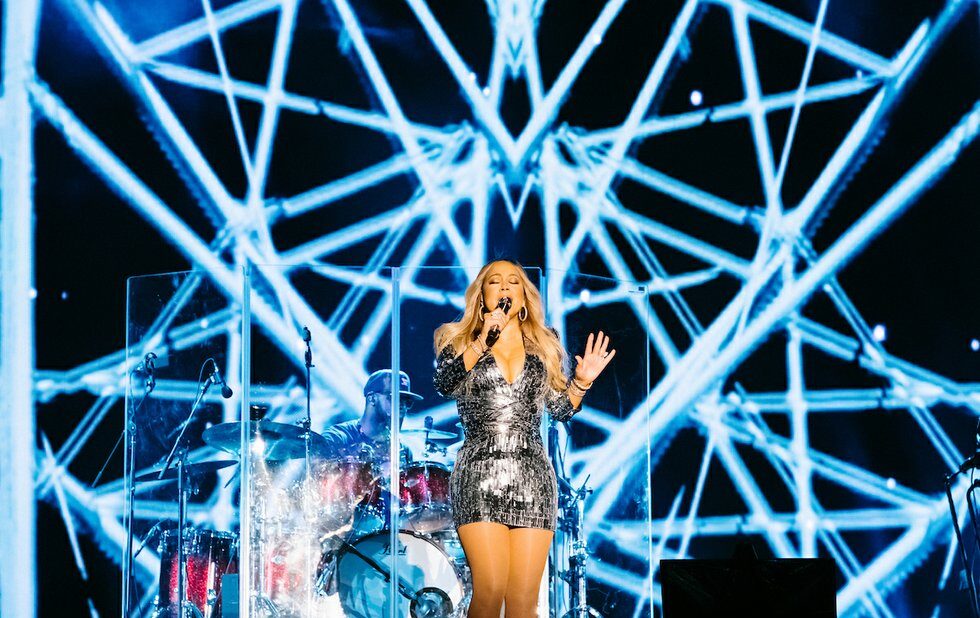 The Toronto festival market might be shrinking rapidly, but Festival d’été de Québec (FEQ) just returned to Quebec City for its 52nd edition, running over 11 nights from July 4-14. As usual, it brought huge names every night to the mainstage, each curated around a genre. We were there for the last four nights. Here’s what we caught.

Mariah Carey makes it through the rain

Mariah Carey is not generally the type of artist to tough it out in hazardous weather. Her live show involves multiple outfit changes (all with sequins), what looks like a national vault’s worth of jewelry, towering high heels and, sometimes, roller skates. The weather is supposed to bend to her will, not vice versa.

Unfortunately for her, her headlining set on Thursday night (July 11) would have to take place during a downpour. The enormous 80,000 capacity mainstage on the Plains of Abraham is built for the elements, and FEQ rarely cancels a set due to rain. (A rare exception actually happened two nights later when a serious thunderstorm abbreviated Imagine Dragons’ set to two songs.)

The R&B legend did say her favourite concert ever was Diana Ross Live In Central Park, a legendary 1983 show that took place during a storm. And the rain did add some extra drama, and she thrives on drama. But you could tell it was getting to her, as just about every song was followed by a quip about how she felt like she was on a skating rink, getting her footing and, occasionally, even improvised vocal runs referencing the weather (“In the rain or in the sun, you’ll always be my baby.”) She also ran through part of her 2002 hit Through The Rain.

That didn’t stop her from hitting her trademark bottle-cap-popping high notes and it didn’t lessen the majesty of songs like We Belong Together or her impressive pseudo-rap bars during Last Night A DJ Saved My Life (yes, she didn’t neglect the #JusticeForGlitter section of the show). And even if stage techs had to wipe off the stage with giant brooms between mini-sets like they were the seventh-inning stretch, she still delivered a grand show on that grand stage. By the end, strangers were locking eyes and belting out the songs together.

This year, FEQ added a new venue next to the mainstage, the Manège Militaire (the Quebec City armoury), which housed artist Q&As during the day and after-party shows at night. After Mariah Carey on Thursday, the After FEQ band was none other than Village People. The festival is known for putting you in front of big acts you thought you’d probably never see, but this one still had me asking “wait, the Village People?”

The answer is yes, sort of. It’s officially Village People, though it’s a version with only one original member, Victor Willis, with a new and younger set of singers playing all the familiar characters: the cop, the cowboy, the construction worker, biker, the “Indian” (the disco era was a different time, but it’s probably time to update) and the army guy – the latter fit well to the venue. Willis and the band vamped out a long set full of songs including Macho Man and In The Navy, but took way too long to get to the song everyone was there to hear: Y.M.C.A. So instead of a non-stop wedding-style dance party, it was mostly a soundtrack to people drinking whole bottles of bubbly bought at the bar… which wasn’t bad either. 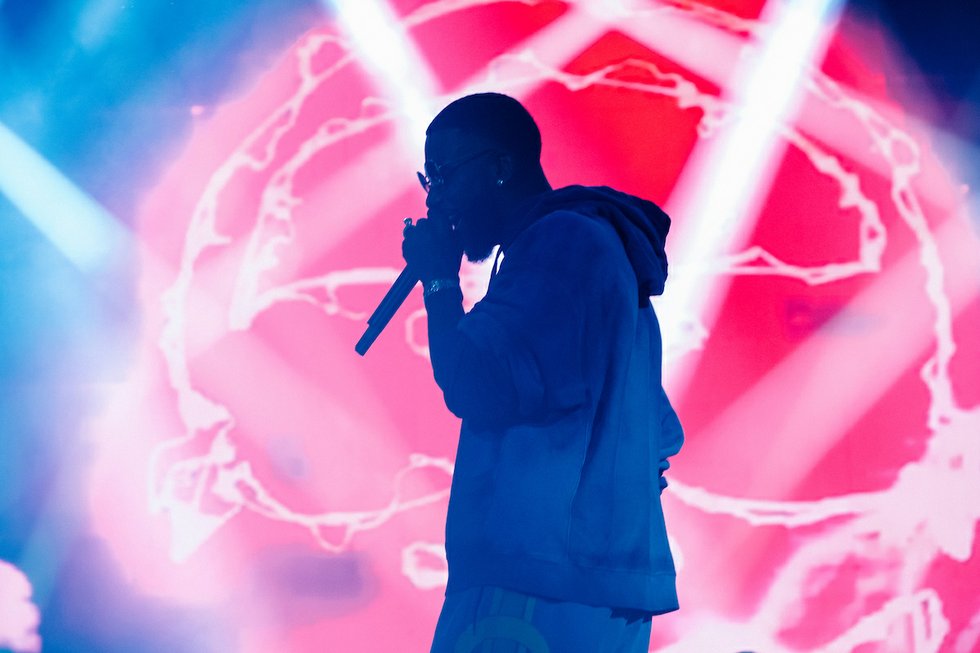 FEQ has a strange place in the country’s festival landscape. It’s one of the biggest, with the biggest names in just about every genre performing on its mainstage, yet few outside of Quebec seem to know about it. Case in point: how many realized that Atlanta hip-hop legend Gucci Mane’s first ever Canadian show would be taking place not in Toronto, not in Vancouver or Montreal, but in Quebec City?

Drake helped the rapper with his border troubles so he could attend an Eastern Conference finals NBA playoff game in Toronto, and he subsequently planned a mini Canadian tour. Still, it didn’t seem like a done deal until his feet actually hit the stage – especially since his scheduled follow-up act Lil Pump was forced to cancel at the last minute due to his own border issues. But on Friday night (July 12), after his DJ pumped up the crowd with guaranteed hits like Mo Bamba, Thotiana and Old Town Road, there he was, covered in jewelry. He opened, fittingly, with the song Both and its prescient line “I got so many felonies, I might can’t never go to Canada / But Drake said he gon’ pull some strings, so let me check my calendar.”

From there it was all smiles and energy, sing-rapping in a surprisingly high-pitched tone over his biggest hits and collaborations, including Lemonade, Black Beatles and Bricks. It was clearly a special show for Gucci, even if he didn’t quite know where he was. Multiple times throughout the show he asked “Montreal” how they were doing. The young crowd, many of whom seemed to be already disappointed after Lil Pump cancelled, didn’t seem to mind. With Toronto left off his Canadian tour itinerary, Gucci Mane is a safe guess as a surprise guest for this August’s just-announced OVO Fest, but if you got an FEQ pass you could have caught him early.

The monumental set, weirdly, wasn’t even Friday night’s headliner. That, instead, was Logic, who closed the night off with more than enough nerdy little brother energy to fill a festival night. He didn’t heed multiple warnings that they were past curfew, and played well beyond 11 pm. 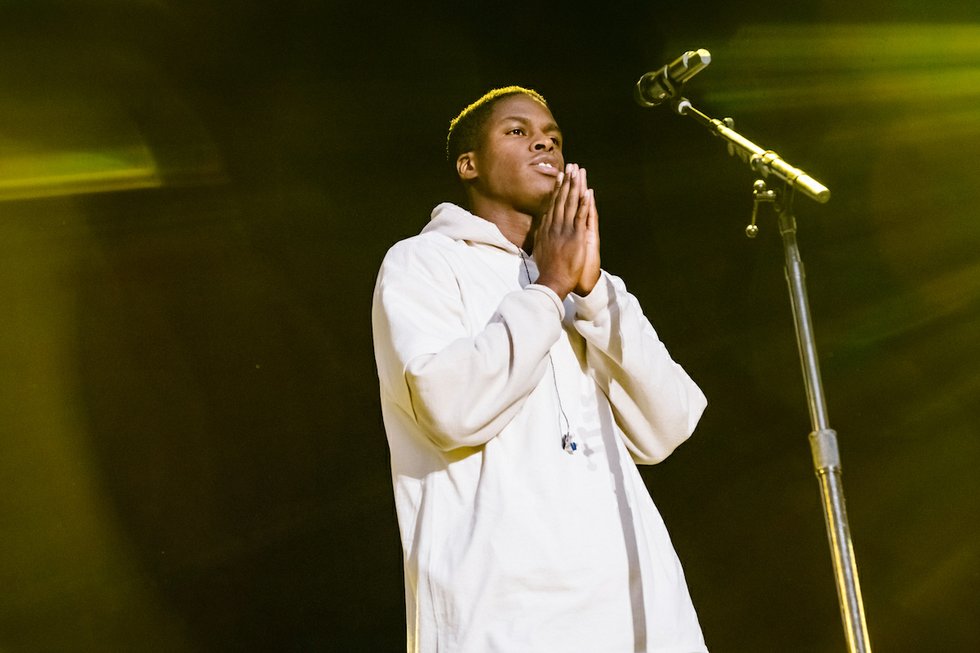 FEQ’s giant stage and language-barrier-affected audience is a good barometer for Toronto acts. Seeing them there, you can see their impact unclouded by hometown boosterism.

Daniel Caesar played right before Mariah Carey on Thursday (July 11) to a crowd that hadn’t quite filled in yet, but was still sizeable by any regular scale. Decked out in an all-white fit (his own Cyanide merch), he tried out some new songs from his new sophomore album Case Study 01. Performing in front of his band and backup singers, it looked like he hasn’t quite figured out the live version of those songs yet, with his hip-hop-inflected delivery on songs like Too Deep To Turn Back and Frontal Lobe Muzik not quite met by stage presence. 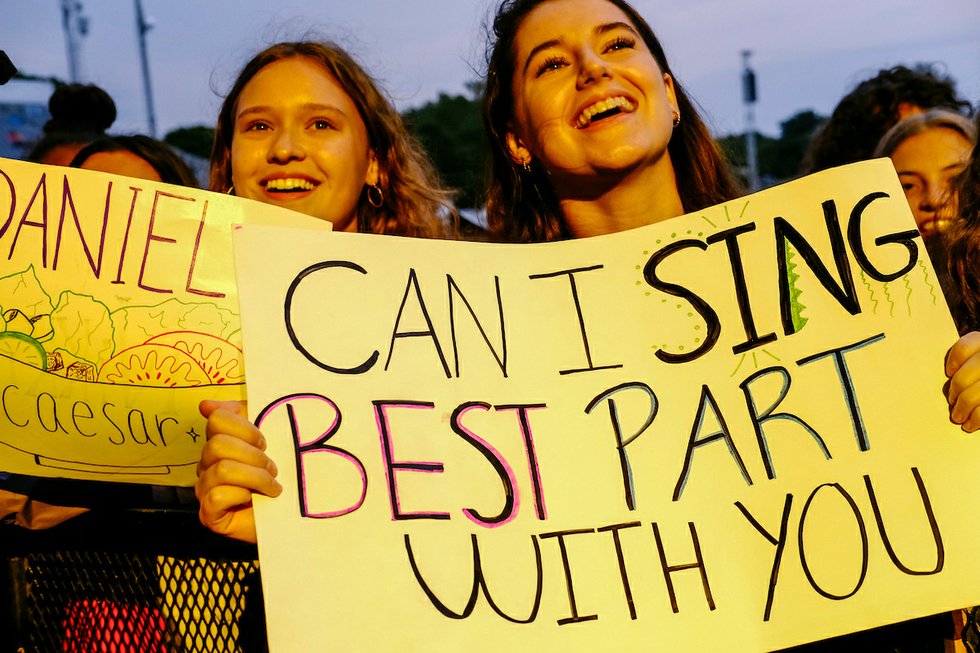 The crowd for Daniel Caesar.

That all changed when he dipped into songs off his debut Freudian. Though he was often seated with a guitar, he found the soulful register that makes him special and the crowd connected to already established songs like Get You and Best Part, singing along in communal harmony. 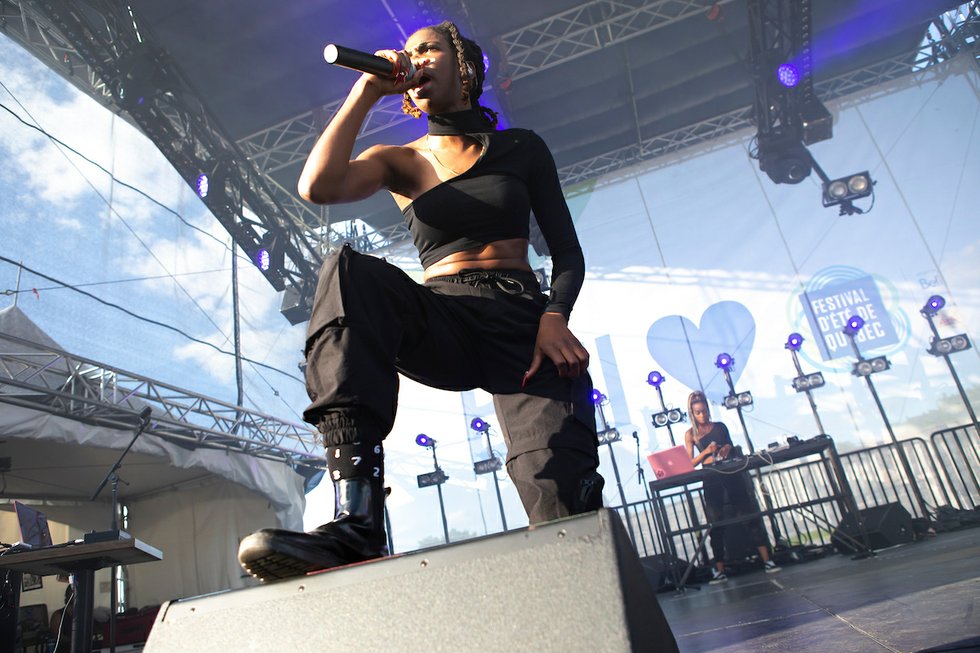 The next night (Friday, July 12), Haviah Mighty played an early set on one of the smaller side stages. It looked like the word hadn’t spread to Quebec about her fantastic independent album 13th Floor as the crowd took awhile to fill out the area in front of the stage. But you could almost see it in real time, with people from the nearby food trucks and beer gardens drawn over by her magnetic stage presence and big bars. She even showed off some reggae range, filling in for her sister’s part on the summer jam Wishy Washy. She might be on the smaller stage for now, but if she can secure a spot on the upcoming Polaris Prize short list, that could change very soon. 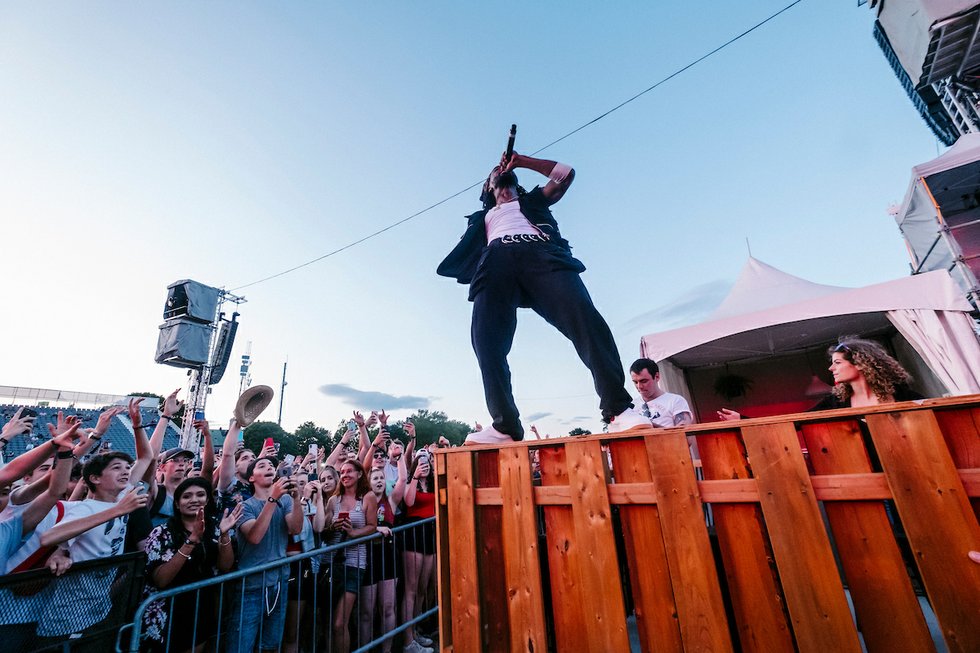 Over on the mainstage, Jazz Cartier got a more plum time slot than he had originally hoped for after Lil Pump’s cancellation, and he easily brought the energy to set the stage for Gucci Mane. He treats any size stage like the rap version of a punk show, walking on the hands of the crowd and finding new spaces to walk through the crowd and pop up in. Despite the live bona fides, though, his last album didn’t build the momentum like many thought it would, and though he played a few new songs, he said they won’t come out “until my label frees me.” In the meantime, though, he’s still a guaranteed festival hit. 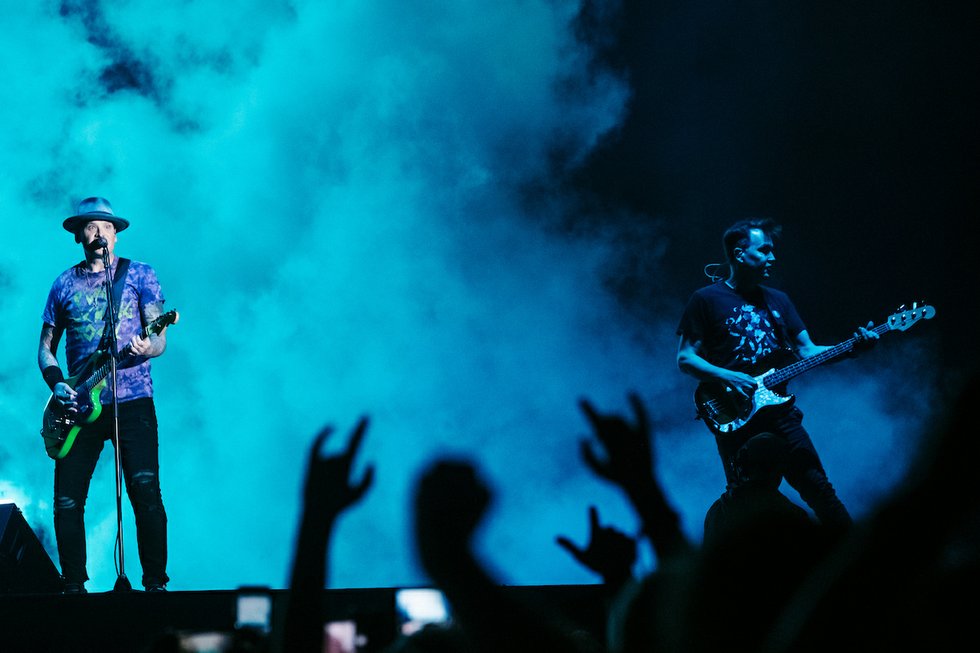 Blink-182 were celebrating the 20th anniversary of their album Enema Of The State, but it was the band that preceded them on the mainstage on FEQ’s final night (Sunday, July 14) that made it feel like we were trapped in 1999: The Offspring.

Lead singer Dexter Holland hasn’t changed his spiky bleached-blond hairstyle in decades, while guitarist Noodles’ stage banter sounds pretty similar to what it might have been back then (“who wants to make out later?”). And they have a lot of pop-punk hits that still hit a certain nostalgia core of your brain if you grew up while they were popular: Pretty Fly For A White Guy, Come Out And Play, Self Esteem, the list goes on longer than you remember. They even dusted off Why Don’t You Get A Job, which on this occasion was like a movie in which Michael McKeon plays a version of Holland who woke up in a world where no one remembers Ob-La-Di Ob-La-Da. “We’ve been coming to the same party for 20 years,” said Noodles about the Blink-182 opening slot. 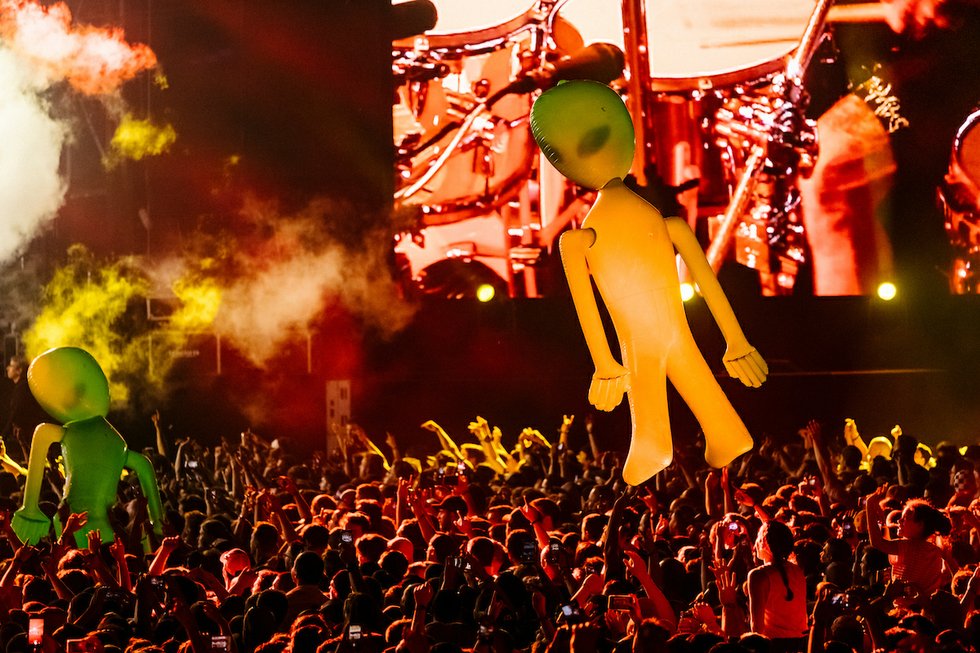 Blink-182 launched right into Dumpweed, the opening song from Enema, as soon as they got onstage, and for a brief moment, Matt Skiba could almost be mistaken for Tom DeLonge, the singer/guitarist he’s recently stepped in to replace. It’s strange the reunited pop-punk veterans are touring such a Tom-heavy album without him, but nostalgia never rests. They did dedicate Aliens Exist to Delonge “the man overtaking Area 51 in the near future” and threw green alien balloons out to the crowd while they played it. They’re still self-deprecating about the album, with Mark Hoppus introducing their prototypical sad song Adam’s Song as “some real emo shit.”

Tracks like What’s My Age Again? have taken on a whole new tone with the band members now in their 40s, while others feel less like “I can’t wait to grow up” and more like “remember what it felt like when I couldn’t wait to grow up?” Blink-182 have leaned into that with their new songs, like the bittersweet look-back Blame It On My Youth, which they played after they had played through all of Enema. They ended the show with Dammit (transposed with a few bars of No Scrubs) and as streamers fell over the 80,000 fans, the lines “I guess this is growing up” summed it all up perfectly.