U.S. Girls jammed with Partner, Jeremy Dutcher was invited into the Halluci Nation, and more from the community-minded Guelph music festival 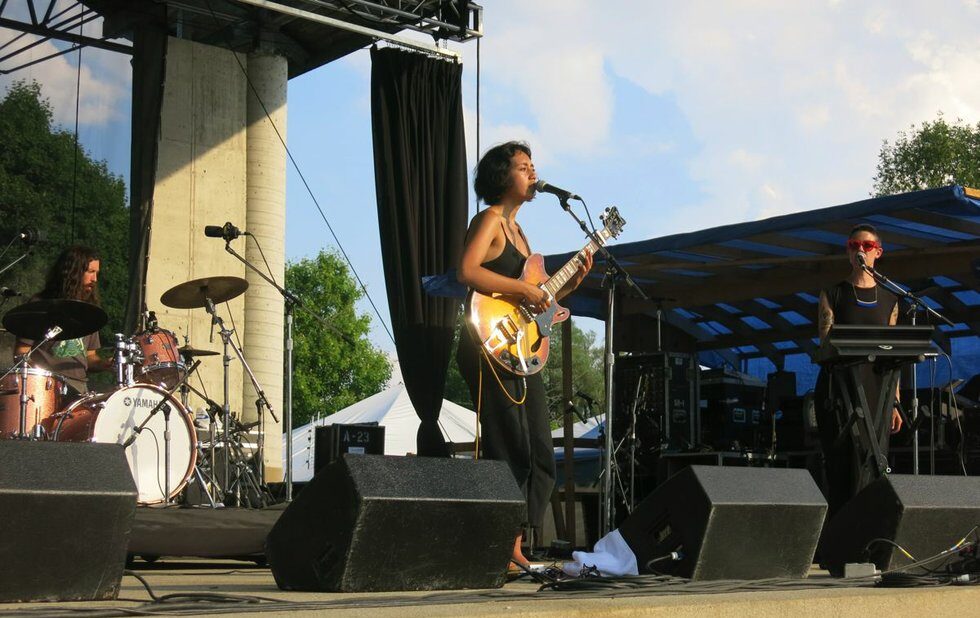 If you failed to recognize some of the names on this year’s Hillside poster, you’re not alone. The Guelph music festival, now in its 35th year, isn’t about the name game.

Artistic director Sam Baijal says some of the headliners he was hoping for didn’t happen – yet. On the other hand, the weekend was stacked with incredible performances.

“Amazing artists who are not that well known are our bread and butter,” Baijal says.

Not as old as stalwart Mariposa Folk Festival – which will be 60 in a few years and enjoyed record-breaking attendance last week – or as young as nearby Riverfest Elora, which celebrates its 10th birthday in August with performances by July Talk, the Flaming Lips and more, Hillside occupies a special place in the local festival landscape.

It’s outlasted the on-indefinite-hiatus WayHome, whose mega-fest scope was major competition the last few years and forced Hillside to change weekends. That couldn’t squash its strong sense of community and environmentalism (reusable plates, cutlery and cups) coupled with a tastemaker’s read on the pulse of what’s next.

Hillside is the live equivalent of rummaging through a trusted friend’s record collection. And true to this year’s Rev. Sekou-inspired theme of countering hate with beauty, this year’s edition left audiences feeling empowered and united.

These were a few of the outstanding performances:

At the same time Tim Baker – lead singer of Newfoundland’s Hey Rosetta!, flying solo with a Toronto band – crooned out endearingly intimate new songs on the main stage, Cadence Weapon put on what felt like – judging by the last couple of songs I caught after running over – a transcendental show. My only Hillside regret is not stealing myself away sooner to get to that party.

U.S. Girls and Partner took the workshop concept – a casual jam or unplanned collaboration – amusingly literally on Saturday morning. After a moving rendition of Sparks’ Never Turn Your Back On Mother Earth, they asked the crowd to pick four notes, and then improvised a song around it. Then they did the same with three notes. Then two. They got an audience member to finish the set by singing a song with the band.

Meg Remy and U.S. Girls stuck to their composed material for their main performance on Saturday night at the Island stage. Drawing from Polaris-long-listed In A Poem Unlimited, the band sounded more primal and spiritual than their more theatrical recent performances in Toronto (though keyboardist Geordie Gordon totally hammed it up for his hometown crowd). Remy took her time, pacing the set out and shushing the revved crowd when it appeared she was trying to tune into the music between songs or play audio samples. It was the best performance of the fest. Peak Hillside. 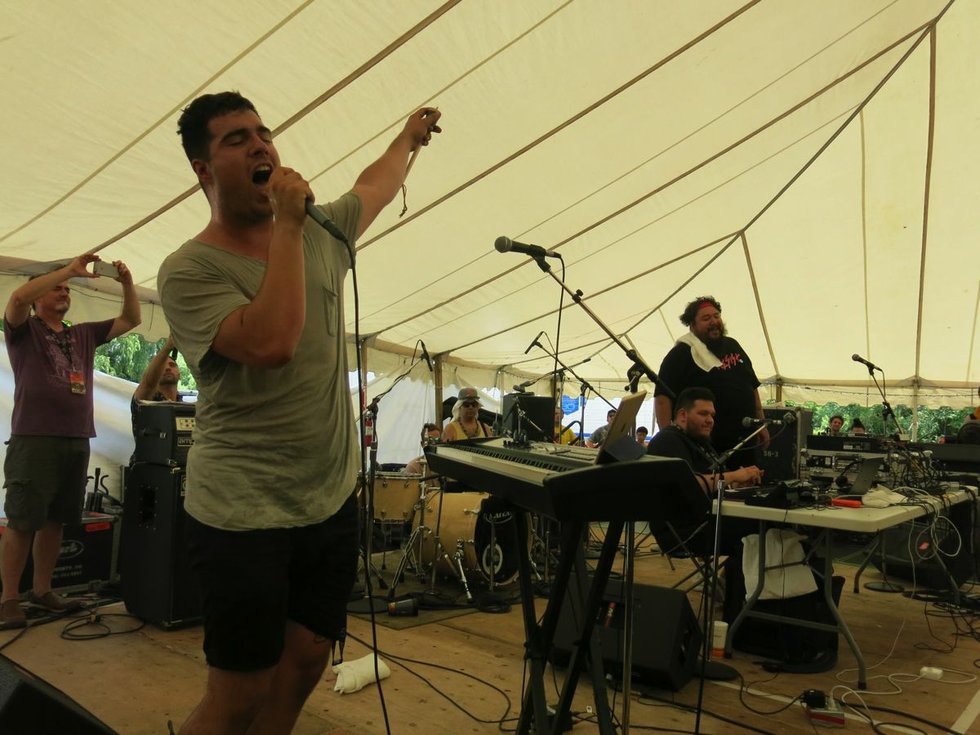 Sunday’s The Heart Of The Sun workshop was a much-anticipated double bill featuring pianist/ethnomusicologist/operatic tenor Jeremy Dutcher and DJ duo A Tribe Called Red. Though they share a manager and innovative approaches to mixing traditional Indigenous music and contemporary influences, this was the first time they’d collaborated in front of an audience.

Dutcher, another Polaris long-lister, totally stole the show, kicking things off with Mehcinut from his album Wolastoqiyik Lintuwakonawa, which Tribe then layered with the intro to their We Are The Halluci Nation (short-listed for last year’s Polaris). This back and forth continued throughout the set despite Tim “2oolman” Hill’s computer issues.

They talked about the state of Indigenous music in Canada right now – how it’s been here all along but now people want to pay attention. Dutcher took up the line “we are not a conquered people,” from Tribe song The Virus and created a melody for it, riffing on the idea, then asking Tribe to make the crowd dance. Bear Witness ended the joint set by officially welcoming Dutcher to the Halluci Nation – an exultant moment.

Sunday Gospel is always a highlight of Hillside, and this year my dream came true when two exciting newcomers spontaneously joined forces: as Portland’s Haley Heynderickx and her band began her song Oom Sha La La, the women of pan-Latin American LADAMA came onstage to add percussion and backing vocals. I’d stumbled upon LADAMA (with members from Brazil, Venezuela, Columbia and the U.S.) the day before at the Rainbow Tent, where they were getting kids to scream “yiyiyiyiyiyiyiii!” Their positive vibes were nearly as contagious with adults. Heynderickx later sang a gorgeous dinnertime set on the main stage. 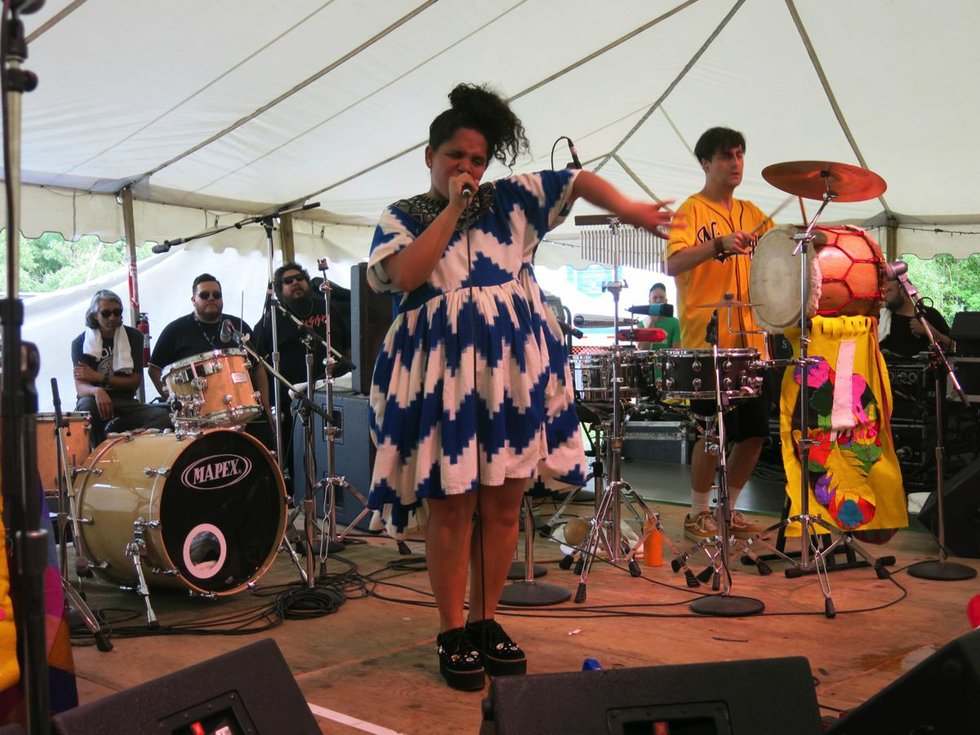 Lido Pimienta was literally larger than life for her 5 pm Sunday set at the Island stage. Very pregnant, she told the crowd to “never underestimate the pussy,” used her belly like a singing/dancing prop, and joked that her performances lately have been therapy the audience pays for.

It was a high-water mark for the festival in a number of ways, signalling the end of the tour cycle for Pimienta’s Polaris-winning La Papessa and likely her final show before she gives birth. The set showcased her storytelling as well as her singing and offered context to her tunes. She opened up about an abusive relationship she had with a man who bought her new shoes every week, but also beat her and threatened to shame her by putting naked photos of her online. She shared her mother’s now pretty famous response: “Go ahead, my daughter is very sexy,” and also what she’s learned about love and empowerment.

By the end of all this La Papessa touring, she says, “I know I have given you some of that power.”