For electronic music fans, Igloofest makes the most of Montreal’s winter

Holding an outdoor dance music festival in the middle of winter might seem strange, but Igloofest gets it right 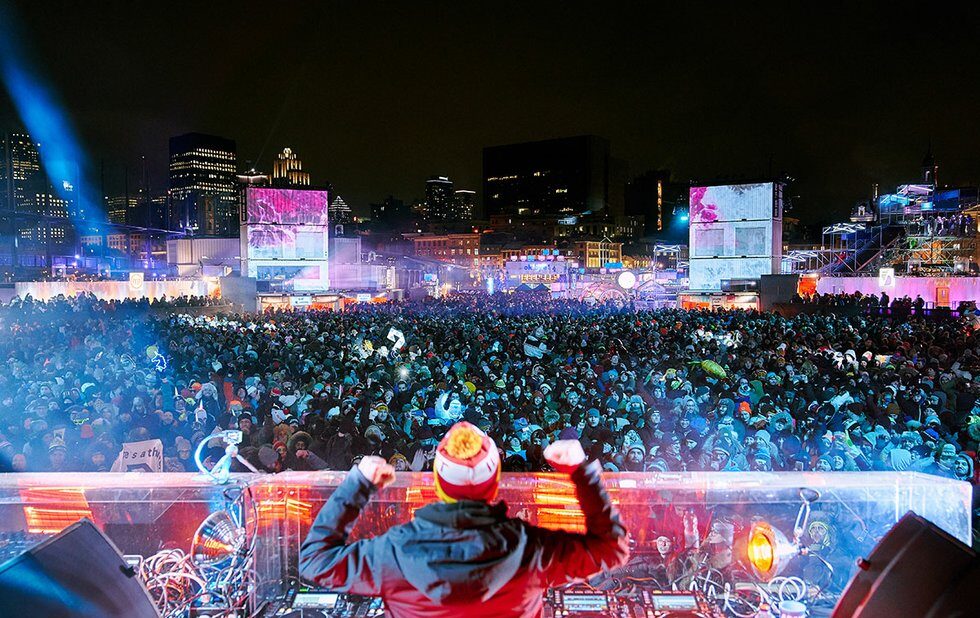 Despite freezing temperatures in Montreal, DJ Spencer Brown gets thousands of attendees dancing at Igloofest 2019.

January isn’t exactly the ideal time to visit Quebec. It’s icy, excessively snowy and no one seems bothered to shovel. On the Thursday I arrived, the city declared a state of emergency as warming temperatures caused bumper-high flooding. The next day, all of it froze and there were reportedly 140 ice-related injuries per hour. Mon dieu.

Still, somehow Montrealers prevail – keeping warm with swigs of strong beer and piping hot poutine. Blast some electronic music set to funky visuals, and you might even forget that you can’t feel your toes.

Igloofest is now in its 13th year, and you can tell the organizers really know what they’re doing. The festival takes over the entire Jacques-Cartier quay in the Old Port, and there’s no shortage of support. The whole city goes wild for this thing and I guess it doesn’t really bother anybody since it’s right by the water away from residential areas. Toronto can’t throw a two-day summer festival at a park without NIMBY neighbours filing noise complaints.

Every Thursday, Friday and Saturday from January 17 to February 2, up to 10,000 partiers flood the pier to see both local and international artists. The first weekend brought names like Diplo and Four Tet, as well as Montreal’s own Jacques Greene and Shaydakiss.

When I arrived for the second weekend, Thursday’s warming temperatures had created a slushy mess on the sidewalks. At one point, about three-quarters of my Blundstone plunged into an icy puddle. I can’t stress enough that proper footwear (and outerwear, for that matter) trumps anything “cool” you might want to throw on. Still, many Montrealers showed up in creative solutions to warmth, including one-piece 80s ski suits, furry costumes and full-length fur. 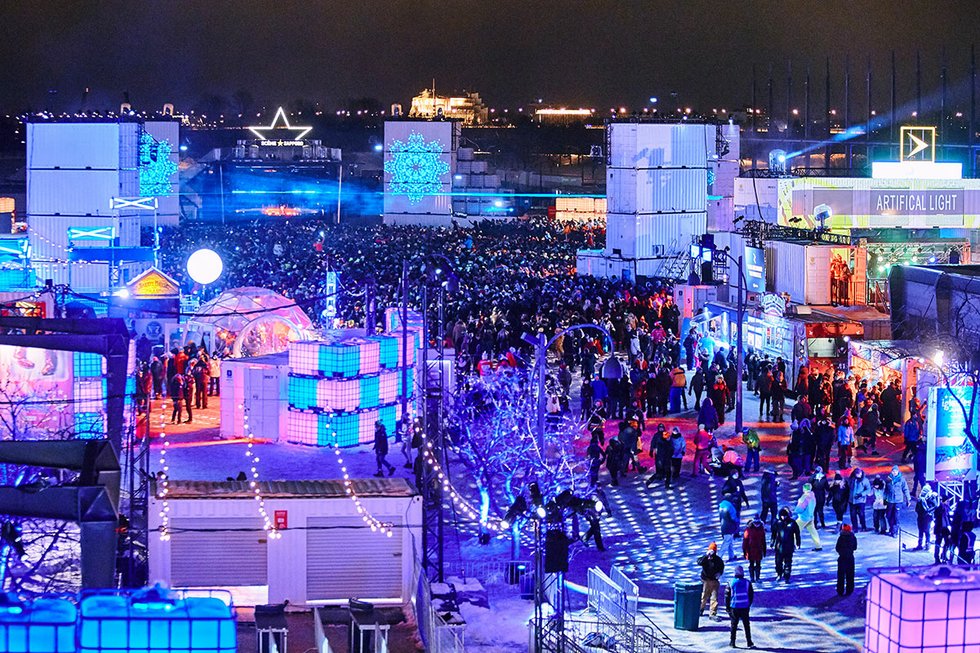 The Igloovillage, which included bars and games, offered a respite for dancers at Igloofest.

I saw AC Slater on the mainstage first, who put on a crowd-pleasing set full of big drops and heavy bass sounds. Like his Saved By The Bell namesake, the L.A. DJ, who’s played nearly every major dance music festival in the world in the last year, is slick and energetic, but a little too electro-bro for me. The fist pumping continued with UK-born, L.A.-based Chris Lake, who kept the crowd dancing by mixing lyrical hits like Yaeji’s Raingurl with deep house cuts.

As the dance floor got busier, I took a break by strolling Igloofest’s village area, where food vendors, bars and games created an adult amusement park vibe. There was even a giant slide. If you needed to warm up, you could roast marshmallows at one of several roaring fires.

By stacking white shipping containers to create walls around both stages, there’s no issue of sound bleeding and video artists are able to project their visuals on industrial canvases to go with the music.

Before heading out for the night, I caught YOOKiE on the side stage. New York City brothers Anthony and Chris Alfaro, who actually call themselves “the bad boys of EDM” on Twitter, are known for hard, pounding, dubstep-sounding sets. Their last visit to Montreal at club New City Gas got cut short for reportedly going “too hard.” But that’s why fans love them, and at this outdoor festival they could be as hair-flippingly energetic and relentless as they wanted. 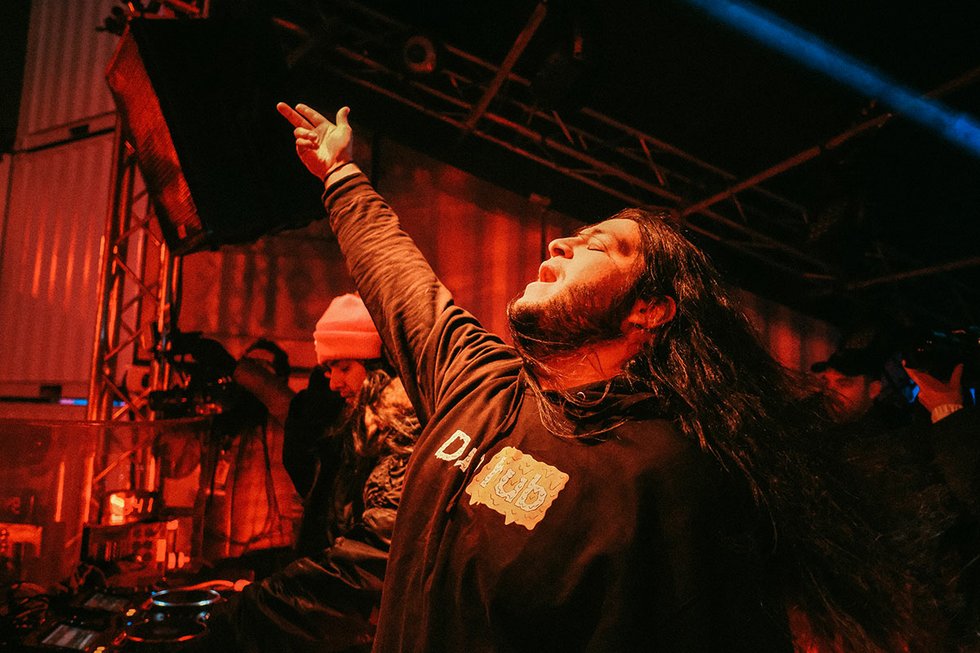 Fan-favourite YOOKiE kept the dubstep loud and their hair loose at Igloofest.

On Friday, the big draw was Above & Beyond, whose moody vocal trance sound hearkens back to the early 2000s (when they formed), and thankfully, they’ve never felt compelled to bend to trends. Their near-two-hour set was a perfectly executed story with a slow-building exposition leading to a full-on heart-pounding party. To some, they might have seemed cheesy and predictable but the sold-out crowd was wild for it, and the dynamic laser show and wavy visuals heightened every emotion.

I was most excited for my last night: the official techno bill with Italy’s Mind Against and Germany’s Chris Liebing on the mainstage. Coincidentally, everyone I wanted to see was slated for the side stage that night, including Montreal’s Softcoresoft, followed by Germany’s Zenker Brothers and Skee Mask, who played together for a bit. The two artists share a similar fondness for crunchy breakbeats layered with ambient techno that are reminiscent of 90s drum and bass without ever feeling overly nostalgic. It provided a balm for the cold – your body can’t not move to their music – and was the ideal end to my Igloofest weekend.

Of course, the entire time I was there, I couldn’t help but question why this sort of festival doesn’t happen in Toronto. We have venues like Ontario Place that could be perfect for this kind of event. But as evidenced by the snowstorm I returned to, we prefer to listen to our dance music in clubs – and it’s even difficult to convince your hibernating friends to meet you at a club when temperatures drop.

For now, we’ll just have to make the trek to Igloofest. There’s one weekend left – Thursday to Saturday (January 31 to February 2), and the lineup features RL Grime, Kartell and Baba Stiltz among 17 DJs. It’s undoubtedly one of the best ways to enjoy the Canadian winter.