The Dinosaur Jr. guitar hero joined the local singer/songwriter for a full set of psych jams for a crowd of 40 crammed into the Dundas West record store 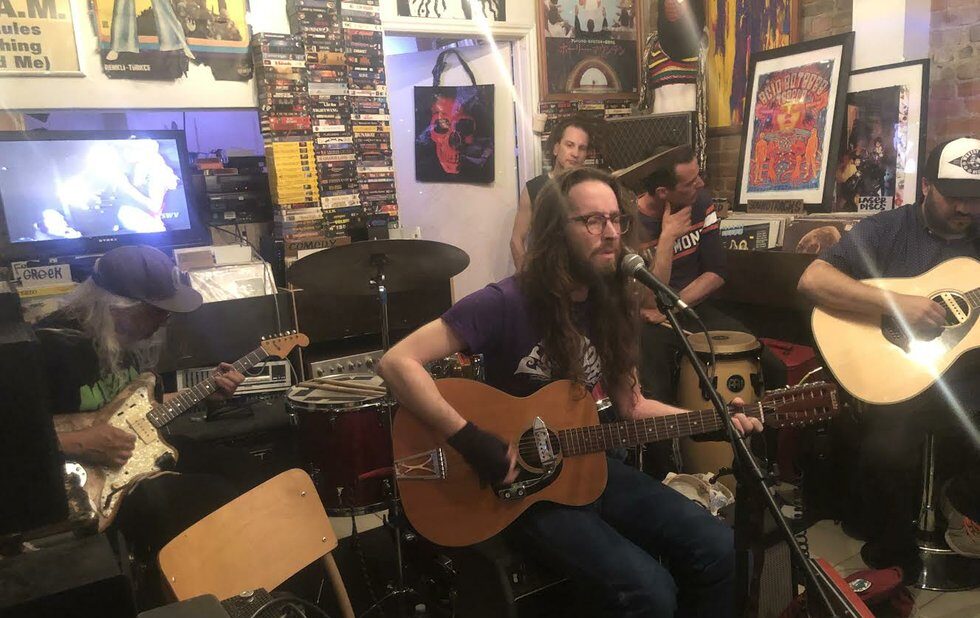 The singer/songwriter – who also plays with the Cosmic Range and on U.S. Girls’ In A Poem Unlimited – was celebrating the release of his stunning 2018 solo LP, Some Horses Run. (He’s since released another new LP, Upper Canada Blues, but he’s putting out albums faster than he can play their release shows).

Dunn’s voice rang out like a shaggy Van Morrison through the small but ecstatic crowd of 40 shop patrons, who yelped, clapped and raised their phones throughout the gorgeous set. And sitting in with Dunn’s band, Mascis added his immediately recognizable sound to a selection of extended jams.

The silver-haired, glassy-eyed Dinosaur Jr guitarist was visiting Toronto to see Hindu religious leader Mata Amritanandamayi, aka Amma, the titular subject of his 2005 album, J And Friends Sing and Chant For Amma.

Mascis is sometimes a larger-than-life character with his neon baseball caps, t-shirts and oversized pink glasses, shredding his way through classic recordings since the early 1980s, but he smiled with humble glee during this 45-minute barnburner. While Dunn alternated between searing solos and glistening 12-string acoustic jangle, Mascis showcased his electric mastery with a Midas touch that has defined the American underground for decades.

Closing with a marathon cover of Neil Young’s freaker classic Cortez The Killer, the fretboard heroes traded solos and twinned guitarmonies until every head in the room was bobbing along.

Anthony Pasquarosa opened the proceedings with a set switching between banjo, violin and dreamily effects-drenched guitar. Finally, New Haven quartet Mountain Movers ended the show with mind-splattering psychedelic rock and one of the most locked-in rhythm sections this side of the Autobahn. For fans of free-flowing sonic explorations and shaggy guitar jams, it was an unforgettable summer night.