Janelle Monae at Rebel, Monday, July 16. Rating: NNNNJanelle Monae is in her free-ass motherfucker phase. Thats a mode of. 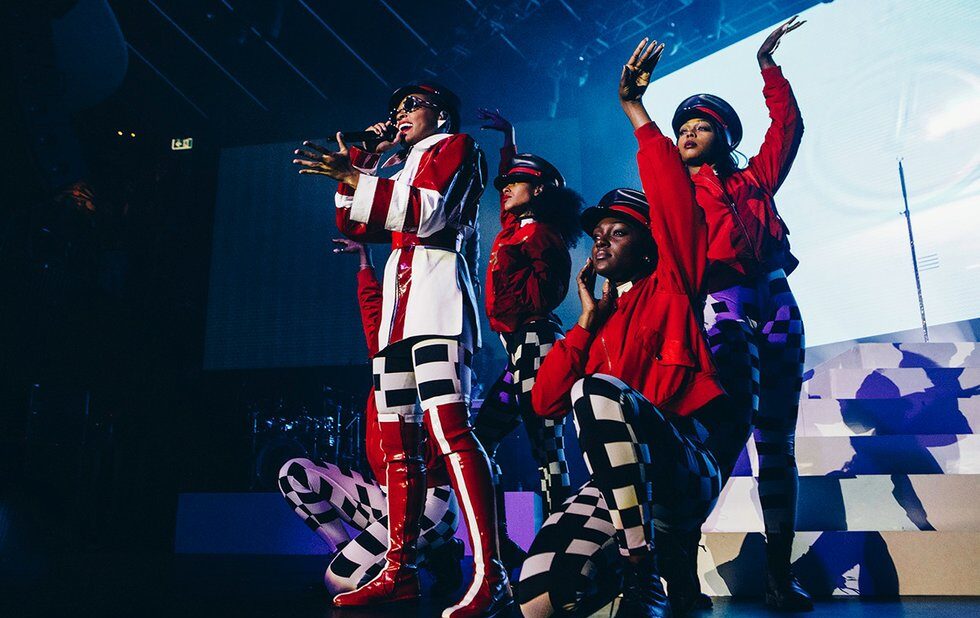 Janelle Monae is in her free-ass motherfucker phase.

Thats a mode of life shes often attributed to her friend and mentor Prince and it describes an unconditional embrace of self, which gives one the courage to move through the world without giving two fucks what others think. Or as Monae puts it: Even if it makes others uncomfortable, Ill love who I am.

You could feel that sense of freedom throughout her near two-hour set at Rebel, which the newly out artist dedicated to many fights for selfhood, including within the LGBTQIA community.

Monaes past shows in Toronto, such as her Toronto Jazz Fest appearance in 2012 and her 2015 free concert at Panamania, were a different kind of free, functioning like extended and exuberant jam sessions (a futurist James Brown vibe) that married Monaes charisma with a tight, funky and almost continuously playing backing band.

Her Dirty Computer tour, however, is a more realized version of the story Monaes been telling since her unreleased 2003 demo, The Audition, a narrative in which societys Others centre their own experience.

Of course, her higher profile and bigger venues allow her to be more ambitious with how she tells her tale. Three screens played clips from her Dirty Computer emotion picture, Monaes term for the long-form video she released with the album. Other times, the visuals were purely emotive, capturing images and colours that expressed a certain mood. When the band transitioned into Princes Purple Rain after Monaes performance of PrimeTime from 2013 album The Electric Lady, the venue was bathed in purple light while a brush-like purple static aired across the screens in an ethereal tribute.

Monae gave a section over to songs from The Electric Lady, including the titular track, which found her flanked by her all-female horn section, and Q.U.E.E.N., during which she brought righteous indignation to her rap verse. Yoga, from the Wondaland Records collective EP, The Eephus, was the clearest expression of Monaes public embrace of herself as a sexual being. Writhing and slinking alongside her dancers, adding provocativeness to yoga poses, Monae displayed a freer, sexier expression, which is the biggest departure from her tuxedoed performances of her earlier phase.

Aside from these sections (she also dipped into 2010s The ArchAndroid) the set was essentially a front-to-back album experience, as she played every track from Dirty Computer 99.9 per cent in order.

The exception was Make Me Feel, one of her standout performances of the night, which acted as a climax to the show. Standing on top of a raised staircase and in silhouette, Monae channelled James Brown, Prince and her own android alter-ego Cindi Mayweather for a series of dance moves that by now are Monaes signature. In a nod to that lineage after all, each artist influenced the other the band segued into Browns I Got the Feelin, while Monae wailed the funkiest man on Earths iconic Baby, baby, baby.

The front-to-back experience meant that you could reliably tell which tracks were up next, but that didnt mean the show was without surprises. The pussy pants made an appearance during Pynk, which Monae wore below her own tour merch (as CEO of her own record label, I can only read that as a boss move). There was also a joyously fun bit where she invited audience members on stage for their own dance solos, which went to show how much attention she was paying to her crowd (at least in the front rows) because she picked fans who each had their own styles. From twerks, splits and even drunken sauntering, it all worked to get the audience hyped over the spotlight given to their fellow Torontonians.

At one point, Monae spoke about Dirty Computer as an experience rooted in love and her gratitude that her fans got to understand a little more about how I love. That openness was a hallmark of the night.