The Mountain Goats brought softness to Toronto during an ice storm

Not everyone who bought tickets made it out to the band's first show here in six years, but the diehards who did got a life-affirming night of collective euphoria 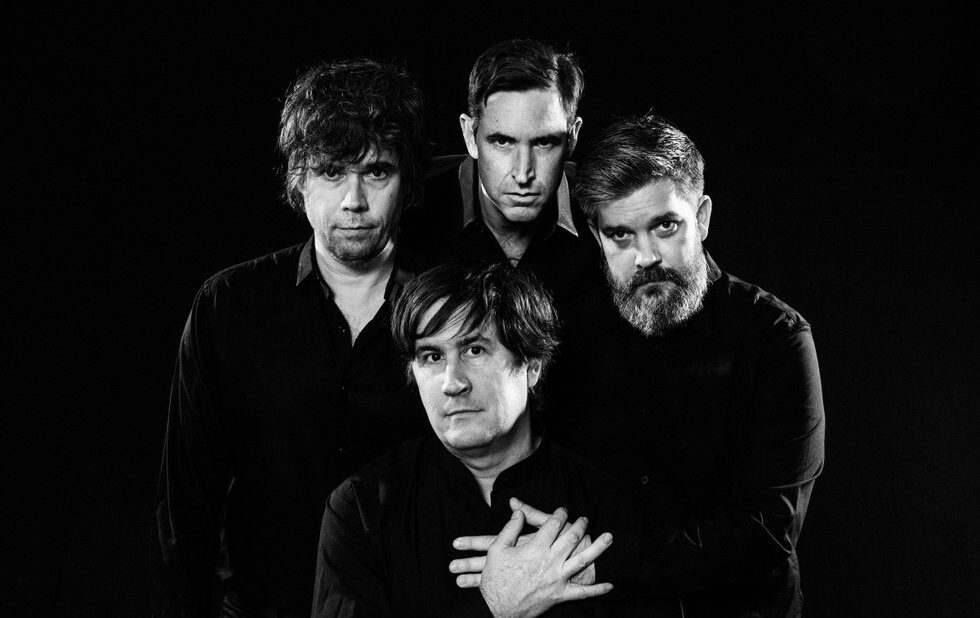 The afternoon before Saturday’s sold out Mountain Goats show at the Phoenix, as freezing rain pounded the city with the heartbeat of our own tired despair, the band tweeted a tender warning: “Dear Toronto friends, I know we only get up here every so often, but if travel is too dangerous for you, please skip the show tonight! Safety first, safety first, safety first!”

It’s been about six years since John Darnielle’s Durham, North Carolina-based band last made it to Canada. Tickets from the unlucky stranded for Saturday’s Phoenix show were sold and gifted on the event page in the hours leading up to the show.

The second leg of the Mountain Goats’ tour for 2017 record Goths has sold out nearly every date, which, obviously – it was the funniest record of the year, studded with touchingly subtle and outrageously conspicuous references and tributes to the 80s’ most extra subculture. Like, Andrew Eldritch Is Moving Back To Leeds, which, lol. Personally, an album about my spooky goth brethren was too much to ignore. And so the concert marked my own prodigal homecoming to the Mountain Goats after years away.

Darnielle, resplendent at 51, has been fronting the Mountain Goats in various incarnations for more than half his life. That legacy was evident in both the passion of his fan base and his dexterity as a performer – emotionally, instrumentally and in his command over his deep catalogue (he did re-start Your Belgian Things, but that’s forgivable – JD has recorded almost 1000 songs). Live band Peter Hughes, Jon Wurster and Matt Douglas (sax! TMG has sax now!) expanded songs old and new. Tear-jerkers from The Sunset Tree and Get Lonely gave trauma a holding zone in fresh, brave new ways.

Songs from 2017’s Goths also heckin’ bop live. Darnielle head-banged at the piano during furious Shelved, howling “Not gonna tour with Trent Reznor,” as a delicious smoke machine smell lingered in the air, comforting like an old faux fur clubbing jacket you put on alone on a cold summer night before crawling into bed. Rain In Soho’s hilariously clever lyrics were shouted with near hysteria as eyes darted across the venue: “There’s a club where you’d like to go / You could meet someone who’s lost like you / Revel in the darkness like a pair of open graves.” (Okay, except no one likes to go to the Phoenix, right? Now that Sound Academy’s gone it has The Worst Sightlines in Toronto.)

Ultra-adorable Unicorn Tolerance was introduced with a monologue about rediscovering softness after years of playing hard, harkening back to Jenny Hval’s “soft dick rock” ethos (and appropriate here in the town of Drake). The sentiment mirrors my own transgression as a Mountain Goats fan. Without getting too personal (too late), I was in probably the only band ever crude enough to name themselves Alpha Couple, a reference to a deep throughline in Mountain Goats songs. One time John Darnielle came over to my place, but I didn’t tell him the name of the band because I had a screaming awareness it would be an imposition. Still, I abandoned the band as they transitioned from 4AD to Merge at the turn of the decade, trading them for only the hard, truly dark stuff (noise, drone, darkwave, Lana Del Rey).

I know I’m not the only one, and I’m here to tell you: return to the fold, sons and daughters. Come home, embrace life’s softness, and wave the sign of the horns while you’re doing it for self-assurance. The euphoria of 1000 timid weirdos screaming No Children is as hard as anything has ever been and a group sing-a-long to Up The Wolves might be the turning point you need in the long process of possibly accepting your father may have made some mistakes. Good art reminds us we’re not alone, and I felt that last night.

(Plus, while you wait for an excellent new JD novel, why not catch up on all the Merge records you may have slept on, like the one exclusively about pro wrestling, which is trendy now but Beat The Champ was ahead of the curve and I am belatedly here to say it kills).

(If you didn’t leave, well, good for you. Stability is everything.)