A stacked lineup of both Indigenous and non-Indigenous musicians featured Lido Pimienta, Feist, Leanne Betasamosake Simpson, Jeremy Dutcher and others 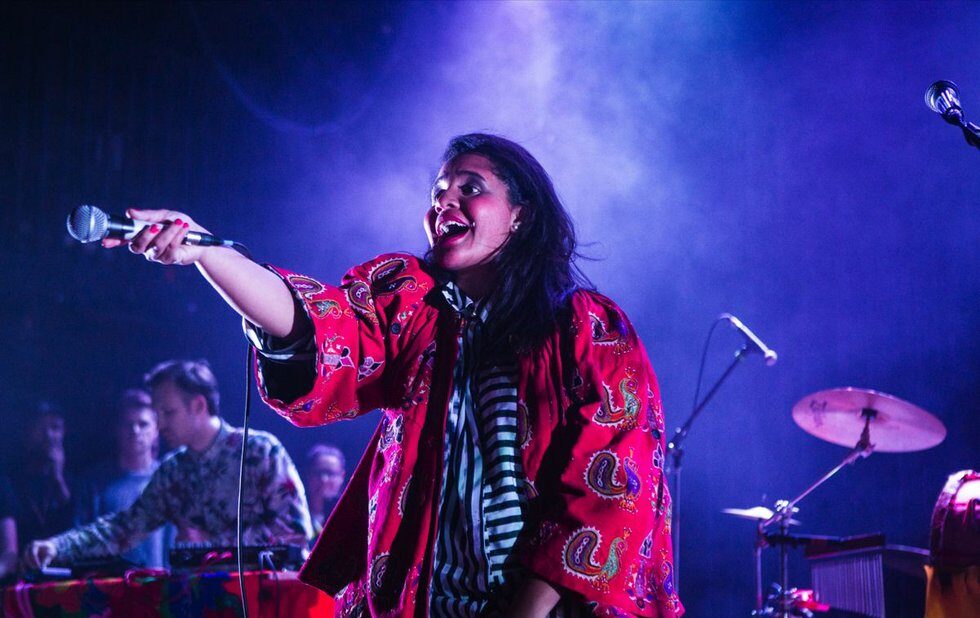 In 2017, the New Constellations tour should not be a novel concept: Indigenous and non-Indigenous musicians and writers sharing spaces and stages, collaborating, showcasing the true scope of the artistry that exists within this land’s colonially-imposed borders. Yet more often than not, Indigenous musicians are put in the “other” category, given segregated award categories and pigeonholed into non-existent genres based on their ethnicity.

By the final stop of the 13-city nation(s)wide tour – which has taken a group of artists and mentors led by Basement Revue founders Jason Collett and Damian Rogers along with head of Revolutions Per Minute Jarrett Martineau across cities like Winnipeg and Halifax, reservations like Kitigan Zibi and, finally, the Opera House – it was obvious those categories aren’t just stifling, but boring. When you take a stacked lineup of artists, activists and organizers from a multiplicity of media, languages and traditions and facilitate their community and collaboration, you get a much more vibrant and diverse show. 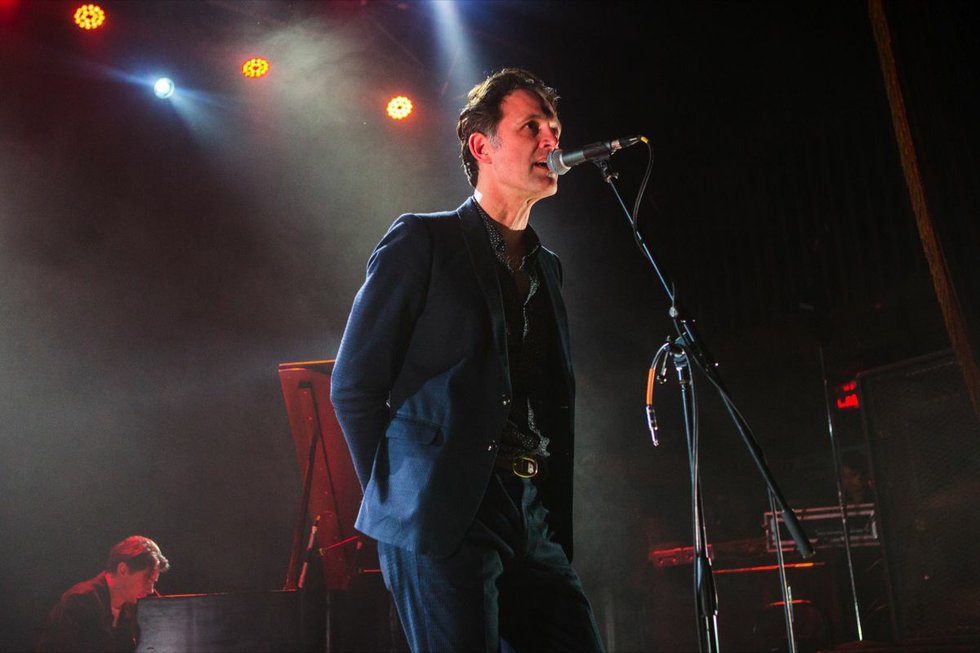 New Constellations started quietly with a land acknowledgment in the Anishinaabe language by writer/musician Leanne Betasamosake Simpson, followed by a Dylanesque ballad by Collett, who was accompanied by Leslie Feist on drums and Peter Dreimanis from July Talk on piano (a collaboration right from the start). 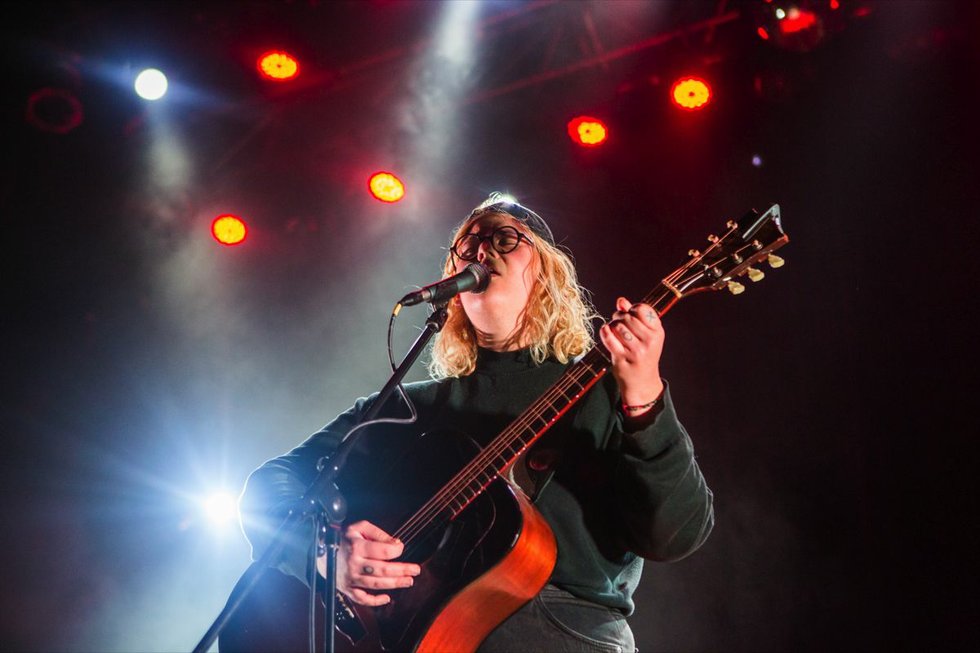 Next was Quebec City singer/songwriter Safia Nolin, who apologized for her “kind of weird” English, but captivated the crowd with her charming and funny stage banter as much as her sparse and mournful tunes (“if you don’t understand French, it’s mostly me saying I’m sad and depressed,” she quipped).

The depth of feeling in Nolin’s songs demonstrated that you can communicate in many ways even if you don’t understand the lyrics literally. Throughout the show we’d get not only English and French, but also Spanish, Inuktitut and the traditional (and endangered) Wolastoqey language. Cultural commentators have historically often reduced Canada to its supposed two solitudes, but there’s a fuller, richer set of people and cultures that co-exist here, and this show was as full a representation as I’ve ever seen of it. 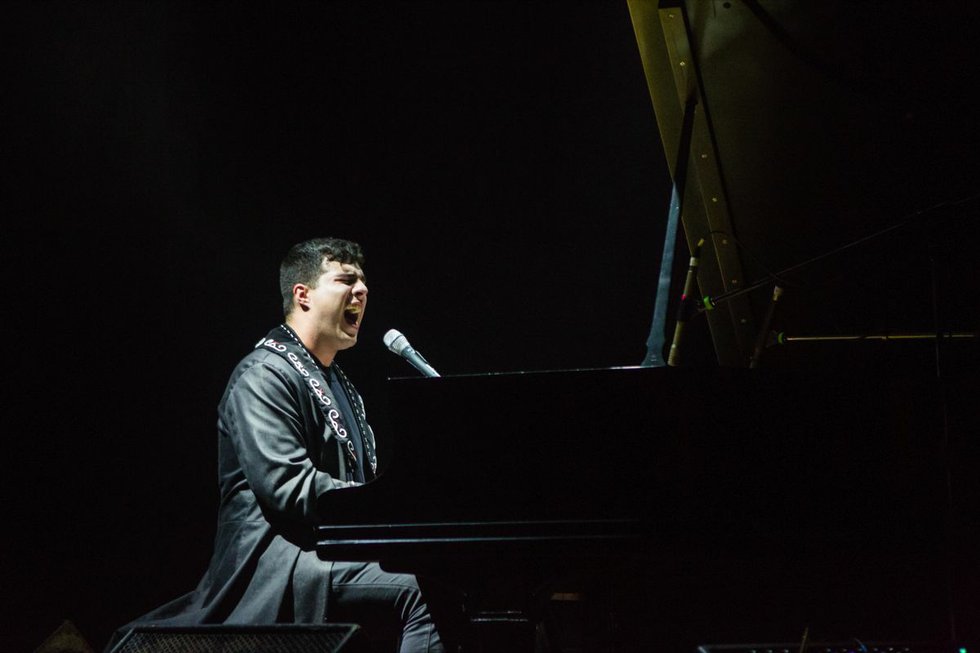 The show was packed with talent, but it was the artist I was least familiar with that captivated me and the capacity crowd the most, Jeremy Dutcher. The Wolastoq artist, who’s currently based in Toronto, was virtuosic with both his voice and his piano playing. Blending his traditional language with both classical and contemporary influences, his operatic voice was like nothing I’ve ever heard before and he struck the keys with a dramatic flair that was simultaneously stately and playful. He finished his mini-set, singing a capella directly into the piano mic, sliding across with his voice as if he was sweeping the keys. Awe-inspiring.

Evidently others on the tour were just as impressed. Dutcher would reappear on drums for Salluit, Quebec singer Elisapie, joking in between her PJ Harvey-ish tunes that he’s one of “those annoying guys” who can just pick up an instrument and be great at it. He was also behind the kit with Leanne Betasamosake Simpson, who said that at the beginning of the tour Dutcher was just doing his own set and now he’s doing everybody’s. That’s part of the nature of the tour. Artists travel together, play together and watch each other’s sets, and you could see them lurking at side-stage, enjoying the show along with the audience.

Canadian music has rarely been explicitly defined, but that hasn’t stopped it from getting a narrow (and very white) conception. New Constellations broadens it out, deservedly putting Indigenous artists on equal footing with established titans like Feist and July Talk (who played an unannounced stripped-down piano duet later). Feist played a three-song set, capturing us with a smoky solo performance of the 2017 song Century that looped and layered her voice in a way that gave it new dimension. She sent out her final song to “the storyteller” and played a cover version of Gord Downie’s The Stranger, the centrepiece of his reconciliation-based, legacy-redefining 2016 work Secret Path. 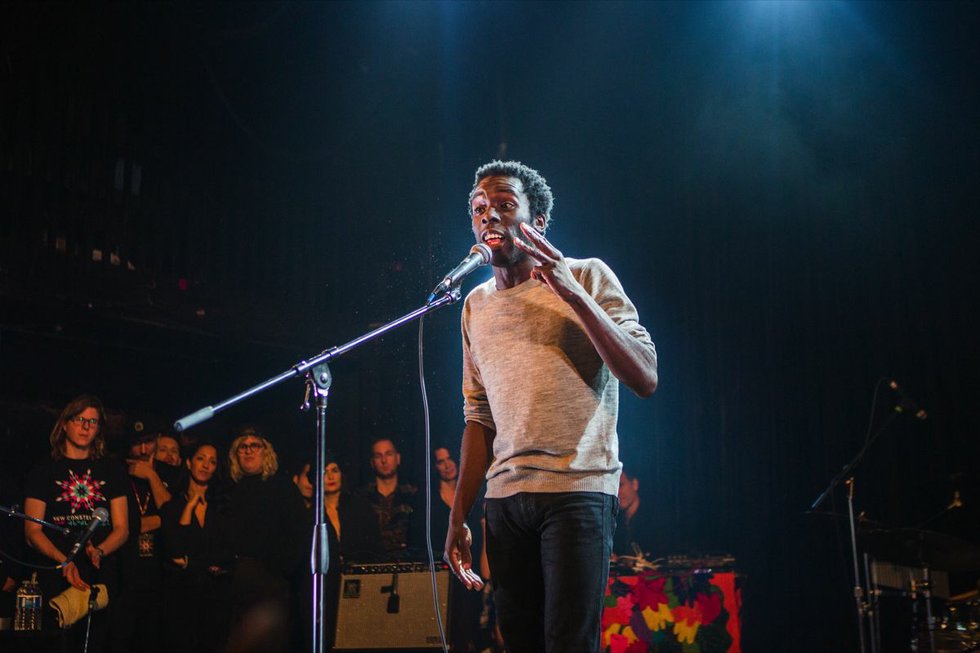 Desmond Cole was the third writer/performer of the night after David Chariandy (whose Scarborough-centric reading from Brother hit a few enthusiastic people in the audience hard) and Rogers herself. Cole’s impassioned, captivating speech connected a lot of the dots from the evening. The journalist and activist spoke about his own heritage as a Black Canadian, giving a brief history of the Shelburne race riots, Birchtown and the Nova Scotian Settlers of Sierra Leone that merged the personal and historical and dreamed of a day where this, along with Indigenous tradition, is taught in school so it can be our shared history.

Lido Pimienta followed and showed that, even though she had a huge 2017 that included a Polaris Prize victory and a whole lot of negative bullshit I won’t retread here, she’s going to rise to even greater heights over the next year. You can feel it in the confident and captivating way she commands the stage, singing songs in Spanish (“get out your Rosetta Stone,” she told the audience) about polyamory, white supremacy and shitty exes who try to leak your nudes. Her voice goes from light and airy to a death growl with ease. She’s a force. 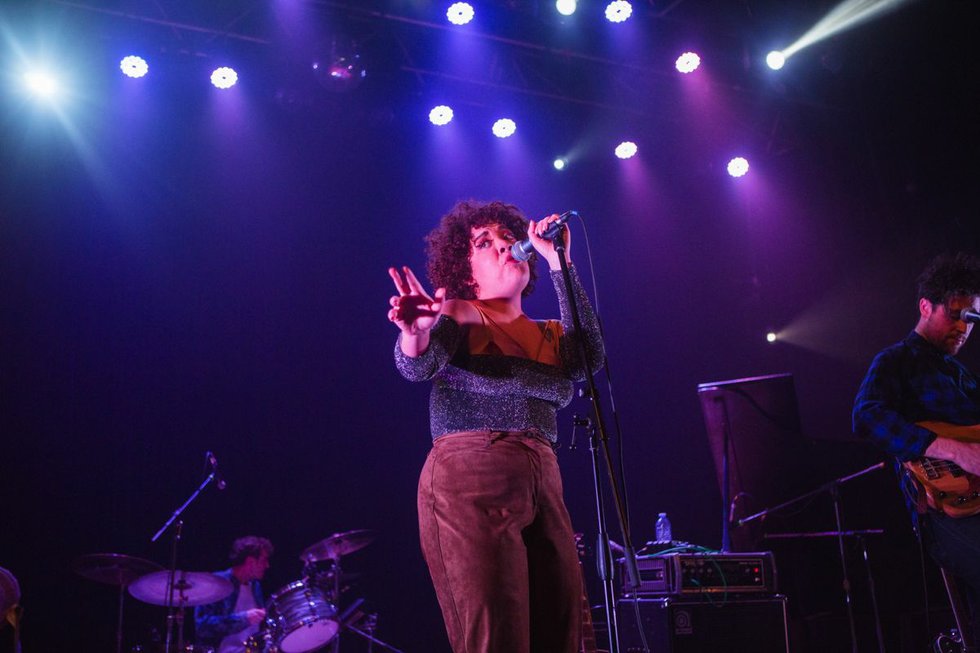 She’s also a hard act to follow, but Weaves were up for it in the final set of the night. Lead singer Jasmyn Burke explained how as a woman of colour leading an indie rock band she often plays for largely white, male crowds, and how this was a refreshing change. The band’s Scream, an empowering anthem about embracing your differences and uniqueness, felt perfectly suited for the occasion, even though Tanya Tagaq wasn’t there to reprise her feature. “Scream your name” she sang to the crowd, pointing at individual audience members as she did so.

The night finished with everyone onstage, including the writers, joining for a We Are The World-style singalong performance of Wolves Don’t Live By The Rules by Inuit folk-rock musician Willie Thrasher. Thrasher memorably played the Native North America gathering earlier this year, and if that represented a reunion of Indigenous artists of yesteryear this was its next wave – Indigenous and non-Indigenous musicians playing together, forming a new Canadian music canon, building bridges between communities and forming new ones. 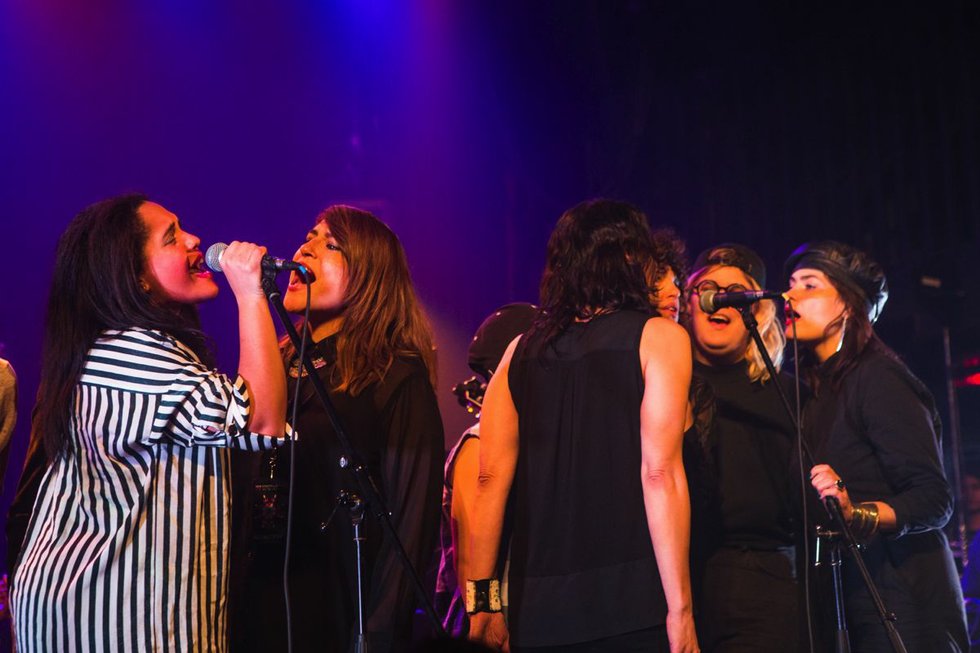