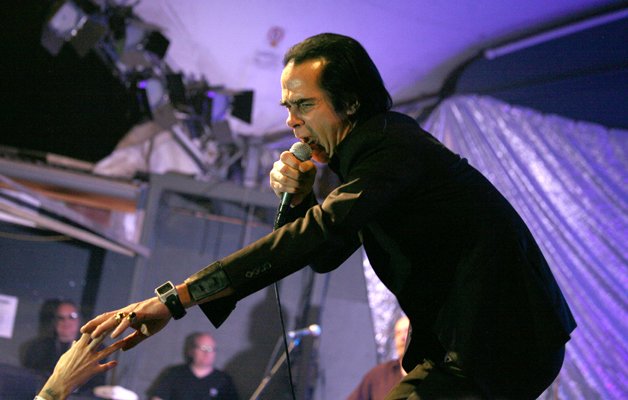 NICK CAVE AND THE BAD SEEDS at Massey Hall, Wednesday, May 31. Rating: NNNN

Nick Cave and the Bad Seeds’ latest landing in Toronto is their most subdued and sombre yet – an even darker shade of the apocalyptic midnight specials he’s delivered over the years.

Mind you, on the cusp of 60, Cave barely showed any flagging of energy, lines in his face or grey in the boot-black mane. He’s still able to navigate 140 minutes of classic frontman poses in a tight-fitting tailored suit, touching and teasing the outstretching front row and finally (of course) wandering 12 deep on top of the creaking, aging seats – now that’s trust in an audience, and in bygone manufacturing – to lay on the hands with a Push The Sky Away finale.

But the lives Cave’s lived and the tragedies endured are ever more there in the words and nuances, and on this return, right off the top, were laid bare inside the city’s most ghostly music box. “All the things we love, we lose,” Cave sighed at the piano on opener Anthrocene, with just a breath of accompaniment from Bad Seeds bassist Martyn Casey.

Last year’s Skeleton Tree LP and an accompanying film in the wake of the 2015 death of Cave’s son, Arthur, amounts to the most personal and poignant work of his career, and both figured prominently in the set list and stark visuals. Girl In Amber, with its “little blue-eyed boy,” unfolded under a solemn, slow walk on a spectral beach and led into a heart-wrenching I Need You that began with Cave seated centre stage as if to tell a tender story and ended with him seemingly compelled by the heavens to centre stage.

Against that kind of emotional walloping, it’s little wonder that Cave’s formidable Bad Seeds remained mostly holstered, like the bowstrings longtime sidekick Warren Ellis kept sheathed rather than firing them off theatrically into the rafters as at Sony Centre three years ago.

Ellis did carve out some mighty guitar slabs during Mermaids, and the six-piece struck skronky lightning into Red Right Hand’s bluesy strut and the post-punk kerfuffle of From Her To Eternity. Stagger Lee’s fire brigade finale was standard Bad Seeds badass, but it’s the mighty furnace they build for Jubilee Street’s coda that illustrates their command and signature spot amid Cave’s deep catalogue. It was a holy shit moment at exactly one hour in.

Still, the band mostly provided atmospheric accents in a show lacking the usual releases and centred around Cave’s unique union of star power and literate, biblical howling – familiar stuff to most of the crowd, if their rapt attention was any guide. Amid all the darkness, Cave lights a worshipful fire with redemptive returns, picking up the mantle laid down with the passing of Leonard Cohen last year.

“I have to say that was particularly awesome,” Cave said after Jubilee Street. “It’s not always that fucking good.”

About said it all, that. Best of all, there’s one more tonight.