Review: Nick Cave and the Bad Seeds turned Scotiabank Arena into the Horseshoe

At the soul-stirring final show of their marathon Skeleton Tree tour, the band proved an arena can feel just as intimate as a sweaty bar gig 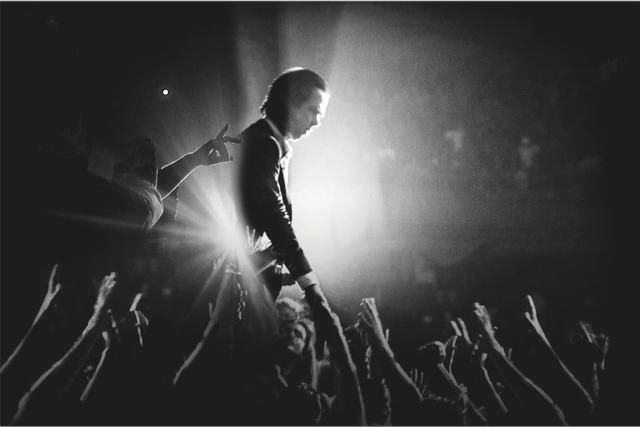 It only took Nick Cave two songs to turn Scotiabank Arena into the Horseshoe.

Bringing his bad, bad Bad Seeds into Kawhi Leonard’s oversized new home, Cave jettisoned his already intimate stage set-up during the band’s performance of Magneto to climb up into the middle of section 119, urging everyone to come closer to him. As the song’s arrangement hit a musical lull, Cave seemed to snap out of the moment he’d created.

“I don’t know what the fuck I’m doing up here, really,” he said, as the arena laughed at this brooding icon’s humanity, as he surveyed the stage, some distance away. “It’s getting back down that’s the problem.”

The truth is, Cave and his band exhibited zero problems at the bigger-than-usual venue, closing out the two-year-long, worldwide Skeleton Tree tour with a finale exploding with joyous and reckless abandon. The unforgettable performance pulled from all over their discography and fostered a dignified, communal intimacy with a fanbase clinging to every raucous post-punk fireball and every heart-wrenching ballad with equal measure.

To see the Bad Seeds these days is to experience chills at stillness and mania. The core band consists of Warren Ellis, Thomas Wydler, Martyn P. Casey, Jim Sclavunos, George Vjestica and Larry Mullins (a.k.a. Toby Dammit). By and large, most of them employ a kind of stoic professionalism, gently finding the feel for ballads such as The Ship Song, Into My Arms, or, by special request, God Is In The House. But even they get swept up in the power and force of their own making, building the foundations from which Cave will often leap into the abyss.

Indeed, the staging invited disaster: two catwalks at the foot of the stage were separated by a considerable gap, which Cave often jumped across when teasing and pleasing fans with the proximity of his being. And when he and the Bad Seeds really tore into the flesh of From Her To Eternity or Jubilee Street or Red Right Hand (which Cave acknowledged was in response to a “terrible day for Brazil,” following the election of far-right candidate, Jair Bolsonaro), the band, particularly musical soulmates Cave and Ellis, convulse with emotive passion and the crowd follows suit.

With full command of his voice and charismatic physicality, Cave is one of contemporary rock’s greatest showmen, but he is no friend to the microphone. He threw numerous wireless and wired mics and their stands across the stage, slamming them into the ground as he danced and strutted frenetically. And yet he could always pluck a new mic off a stand, like the stage was some kind of sound person’s garden, growing the things.

After wading into the crowd to a mini-stage for The Weeping Song, Cave made his way back to the main stage, bringing as many patrons as he possibly could with him, and they all obeyed his commands to sit, stand or raise their hands during Stagger Lee and Push The Sky Away, which were remarkable displays of pacing and musical theatre. As if all of this wasn’t enough, the Bad Seeds returned for an encore of Mermaids and Rings Of Saturn, which meant that their arena rock show had hit the two-and-a-half-hour mark. Quite simply, they gave their all in every possible sense.

This Skeleton Tree tour, which included two Massey Hall shows in 2017, was truly a feat in every regard. Full of cathartic contemplation of life and death and joy and sadness, it was a soul-stirring form of galvanizing rock music that Toronto was fortunate to have witnessed many times. But it was a particularly fortuitous occasion to see the band play their final night of this tour at their biggest show here yet and get every last thing out of their system.