Obey Convention is what a festival should be in 2018

After four days at the fearless, inclusive Halifax fest, we picked up some lessons that Toronto festivals could learn 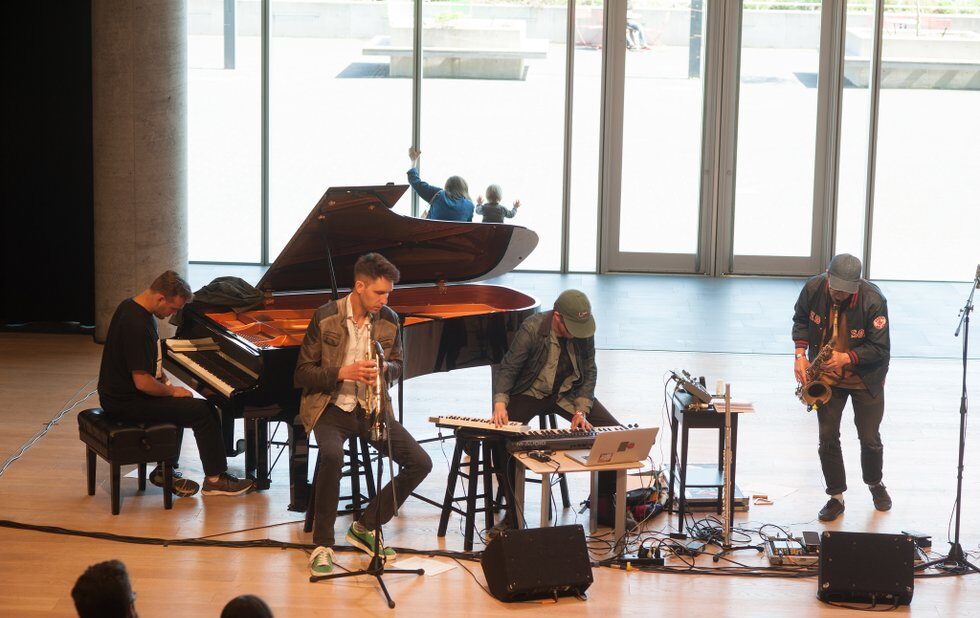 OBEY CONVENTION at various venues in Halifax, Nova Scotia, Thursday, May 24 to Sunday, May 27

You know what’s great and also rare these days? Going to a show without knowing who the bands are. Spending half a week at a festival full of acts you’ve mostly never heard of. Being introduced to something for the first time in a live setting.

Of course, those attending Obey Convention could’ve googled the various bands on the bills before arriving at the venues but I get the sense most of us didn’t. The surprise factor is a big part of the beauty of Obey, which takes place over four days on non-traditional Halifax stages.

At a time when Toronto has seen the loss of so many multi-day music events, Obey might also be a lesson in what a festival should be in 2018. Here are some takeaways from the four days.

With all the music in the world at our fingertips thanks to streaming services, YouTube and SoundCloud, and with the average music festival full of well-known marquee names, we’re getting lazy and risk-averse, tending to only buy an album or concert ticket by familiar favourites. (Or, more commonly, paying for nothing at all.) But hey, guess what? There’s so much out there to discover.

Being at Obey was a reminder to keep challenging ourselves as music listeners. The festival has been around for 11 years and has expanded its focus from punk to genre-less innovators who can’t be pinned down. The programmers seek out the weirdest stuff from the darkest corners, presenting us with mind-expanding lesser-knowns, this year under the theme of “radical joy.”

Some notable personal discoveries for me included Wandarian, a psych-folk solo project out of the forests of Nova Scotia by Jesse Griffith, who stumbled upon his unique style of acoustic-guitar-playing after he caught his guitar as it fell from something (“not a guitar stand, though. That would be too… logical,” he explained) and the capo slipped off. The result is a kind of right-hand plunking and scraping at the strings amid hypnotic finger-picking. For fans of Steve Gunn, William Tyler and Michael Hurley. 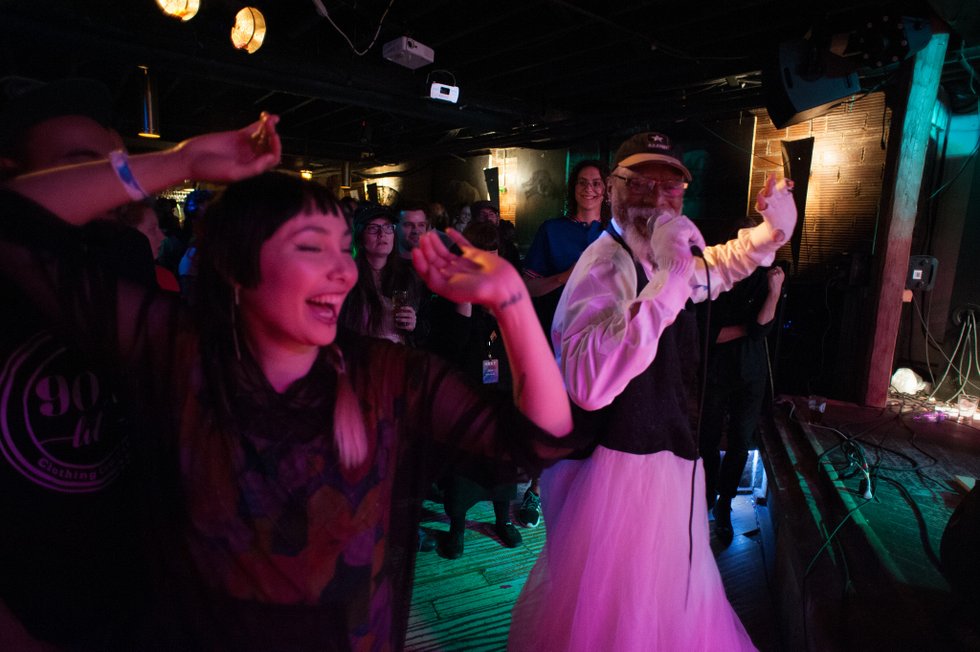 Other standouts included Chicago’s ONO, a legendary collective formed in 1980 and continued live by long-time members P. Michael and Travis, whose oratorical/gospel messages about toxic masculinity, trauma and resistance are as loud and powerful as their industrial avant-garde songs – and multiple costume changes Liu Fang’s performance on the pipa (a traditional lute dating back 2,000 years) was stirring and soothing under the cathedral ceiling of Fort Massey United Church Halifax four-piece Cutie brought back memories of DIY all-ages shows of yore as they banged out mighty and harsh punk in the back-lot garage of the North Branch library.

Is Obey’s programming sometimes patience-testing and sonically challenging? Yes, yes it is. (id m theft able’s explosively bonkers electro-voice project and Sarah Hennies’s “gruelling” vibraphone marathon are two examples.) But getting pushed outside of my melody-loving comfort zone was worth it.

“We’re literally programming at the edge of the continent and in part of the country where many people live in a state of constant financial precarity, ourselves included,” writes creative director Andrew Patterson in the festival booklet.

“Inclusivity” is an overused buzzword these days, but Obey puts the beautiful concept into action in the most integrated, least tokenistic ways. With financial precarity in mind, and with anti-capitalist ethics as a driving force, all shows were PWYC – and we were reminded at the door that they really meant that.

The majority of shows were also all ages. Almost all of the 15 venues had non-gendered washrooms and accessible entrances, with detailed info included in the festival booklet. Venues were all located downtown, a few to the north and a few to the south, and on transit routes. 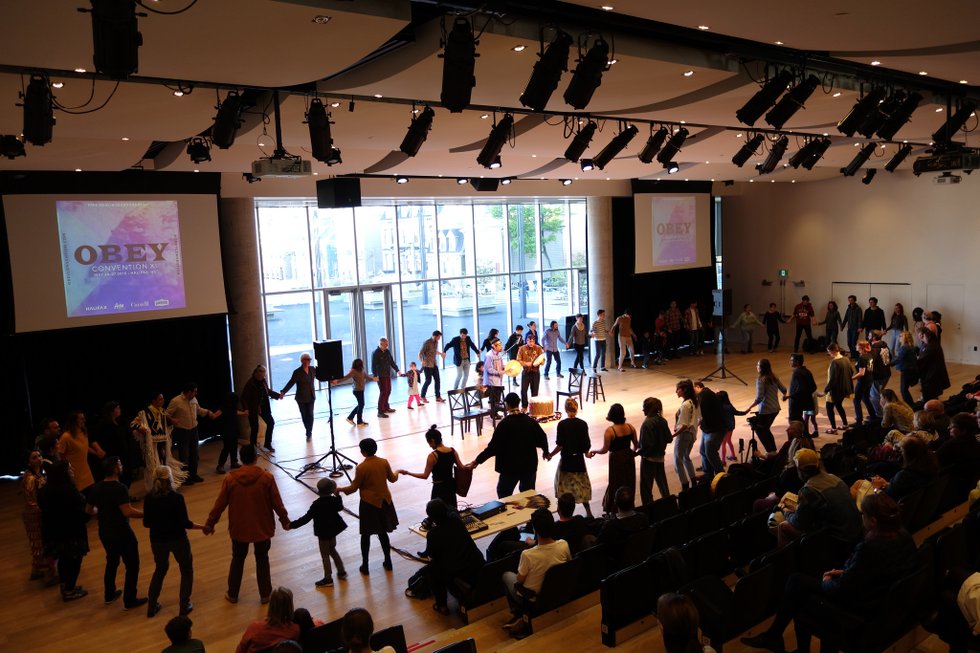 Indigenous acts were in abundance, with dancing and song woven throughout the programming, like at the friendly opening ceremony featuring Sacred Wolf Singers (the audience was encouraged to circle the group while holding hands – and did) and Gina Burgess’s commissioned classical work about mental health. Or at the closing day healing concert with Toronto meditative new-jazzer Joseph Shabason and the traditional Mi’kmaq duo of Melissa Labrador and Corbin Hart.

As someone who has attended hundreds of shows in my lifetime, I can’t stress how sweet it is to hear live music outside of a bar setting. I took in Syrian singer/songwriter Hussam Al Assaf and Iranian composer Mohammad Sahraei’s lilting, dynamic set under the afternoon sun on a peaceful plot of land called Common Roots Farm, a community garden downtown.

Obey embraces unconventional venues, and so we also got performances at the bustling melting pot that is the Halifax Central Library (those shows in particular had as many children and grey-haired folks in attendance as in-the-know 30-somethings), the Mi’kmaw Native Friendship Centre, a rock climbing gym, a craft brewery and the aforementioned library garage. Strangest was entering cavernous high school Citadel High for a late-night dance party with France’s Nídia, Haitian-Canadian DJ/producer/singer Jerico and Halifax-based former Torontonian rapper Benjamin. 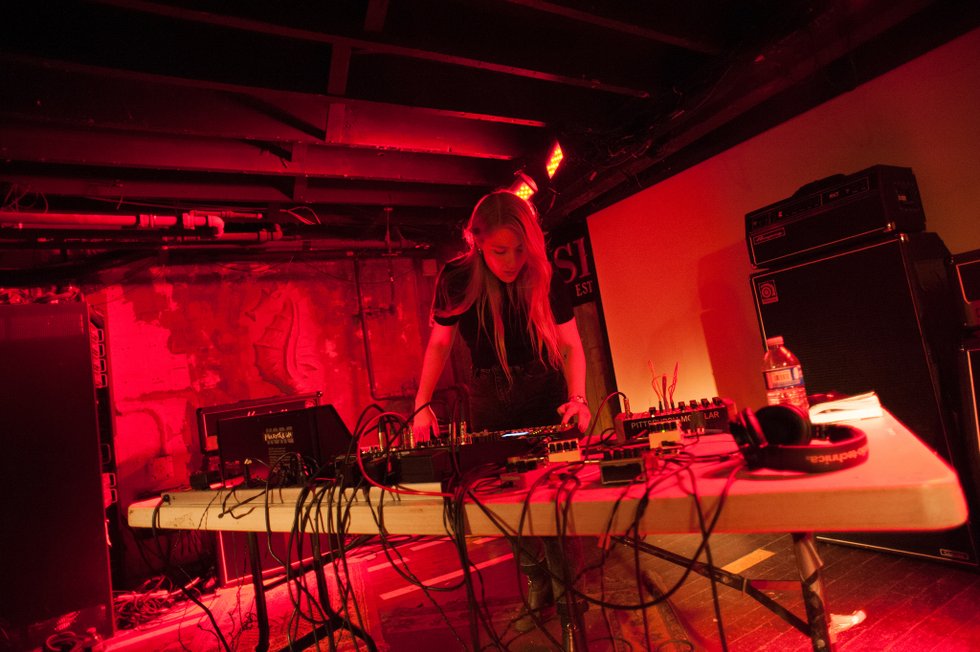 But popular bar the Seahorse (in the basement of the Sloan-referenced Marquee) was also deployed for Saturday night’s riveting Pharmakon and Vile Creature show, the most aggressive of billings and one that’ll be remembered for its ferocity. Don’t miss Pharmakon’s sure-to-be-confrontational return to Toronto on July 21 at the Garrison. Doom metalheads Vile Creature hail from Hamilton, so expect some local shows soon.

The calendar was stacked over the four days, but with zero overlap, allowing pass-holders to easily take in every performance, as well as afternoon artist Q&As, interactive kids’ event O’BABY, and a hilarious set by experimental comedian/sound artist Ray Fenwick about how to talk with plants. The careful attention paid to logistics, to the musicians (many told me they felt very well taken care of) and to music fans might be why audiences were so respectful, always listening with full attention no matter how challenging the sounds.

All in all, Obey was a reminder of the importance of weird, of actively pushing social constructs to the back burner unless they’re serving you, of the fringes as places for deeply unique creativity, of continuing to build safer places of community, of ambitious ventures not fuelled by the pursuit of profit, of getting older without losing vital aspects of who you are and what you believe in.

It can be done.