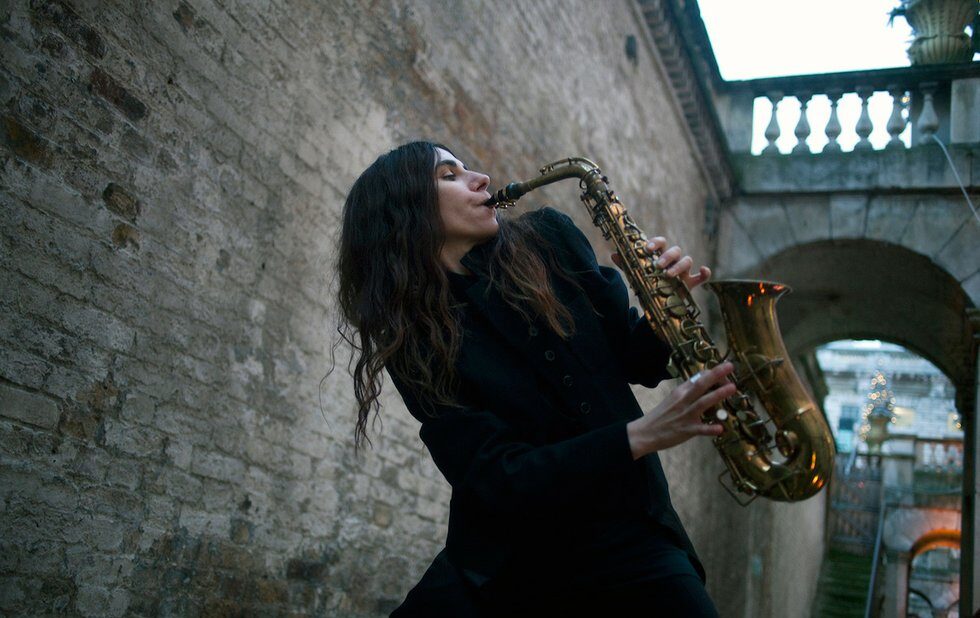 When PJ Harvey released The Hope Six Demolition Project, many critics likened the album’s observational travelogue lyrics to poverty tourism. Inspired by trips to Kosovo, Afghanistan, and Washington, D.C with photojournalist Seamus Murphy, the English rocker’s lyrics positioned her as outsider and witness, whisked in and out of town by hurried rhythms and skronking sax.

Her view was empathetic, but separated by a car’s windowpane – always at a remove. Subjectivity was the point.

Watching Harvey perform 10 of Hope Six’s 11 songs at Massey Hall at her first Toronto gig in nearly 13 years was a similarly one-sided experience.

More theatrical performance than concert, the show was created with British theatre director Ian Rickson and opened with Harvey and her band marching on stage in formation. They brandished snares, saxes and woodwinds as they launched into Hope Six track Chain Of Keys.

Harvey, of course, was instantly identifiable among her nine-strong band of men in black (including former Bad Seed Mick Harvey, Queens of the Stone Age’s Alain Johannes and long-time collaborator John Parish). She looked elegant and bird-like in a purple puss-in-boots wrap jacket and feathered headdress combo (by Ann Demeulemeester), and everything she did for the ensuing 90 minutes was as choreographed and intentional as that dramatic entrance.

The band followed the opening with four more rollicking Hope Six songs – The Ministry Of Defense, The Community Of Hope, The Orange Monkey and A Line In The Sand – and three cuts from 2010’s Let England Shake. For each one, Harvey would emerge from her chorus line of players, sometimes brandishing a sax that she held dramatically to one side when singing. She gestured her free hand about, tracing and miming lyrics with a ceremonial poise. Her vocals were equally controlled, her cadences and emphasis perfectly precise. Then, at the end of each number, she would retreat wordlessly to rejoin the band in the shadows.

For the solemn When Under Ether, off 2007’s White Chalk, she stood perfectly still with arms at her side. The similarly minimal Dollar, Dollar began with a snippet of street noise and a fragile organ note that crescendo-ed into a bellowing call-and-response with Harvey’s crystalline voice. The Wheel and The Ministry Of Defense both brought the crowd to their feet for standing ovations. The latter included a show-stopping extended solo by Terry Edwards, who blew the shit out of a baritone sax and a tenor sax at the same time.

The crowd remained standing for a volley of oldies – 50 Ft. Queenie, Down By The Water, To Bring You My Love – that dispersed the protest politics with a bit of lustiness. For the main set finale, the band returned to the front of the stage and sang out the spiritual refrain to River Anacostia with an arresting a cappella that was nearly ruined by the audience cheesily clapping in time.

Given PJ Harvey’s long absence from Toronto, you can’t fault fans for being giddy. Despite the heavy atmosphere and silence that greeted them between songs, many audience members had no inhibitions when it came to blurting out desperate professions of love.

Perhaps some wanted something closer to turned-up rock, hot-pink jumpsuit and caked on blue eye shadow PJ Harvey of the mid-1990s. But this regal – and flawless sounding – version of PJ Harvey was a reminder that she has always used theatrical artifice and performance to both draw people in and create a level of distance.