The Houston rapper brought some of his hometown magic to Toronto, while also making it clear his ties to our city run deep 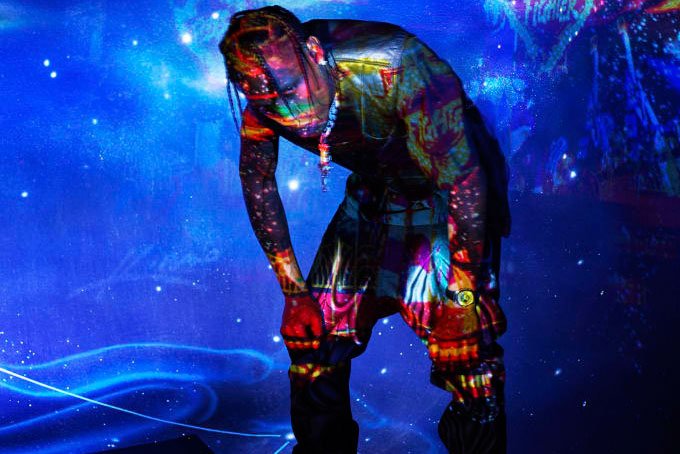 Growing up in Houston, the rapper spent his summers going to Six Flags AstroWorld, a sprawling, 57-acre amusement park that shut down in 2005. His third album AstroWorld was inspired by a dream of bringing that magic back to life.

He did that during his Toronto AstroWorld tour stop. After opening performances from 2018 rap sensations Sheck Wes, whose commanding stage presence transformed the then only half-full arena into a party, and Gunna, who received so many ovations you’d think he was the headlining act, Scott suddenly materialized on one of the two stages that had been set up in the arena.

Clad in simple green cargo pants and his own merch – a t-shirt that read “wish you were here” in scribbled cursive over the words “STAFF” – his unannounced appearance encouraged those with general admission floor tickets to sprint across the arena, flooding the empty corners like a human wave. It took Travis all of three minutes to turn the ground into a mosh pit with his performance of Stargazing. “And it ain’t a mosh pit if ain’t no injuries/ I got ’em stage divin’ out the nosebleeds,” he sang on a largely empty stage that, save for a few smoke machines, contained almost none of the big-budget projector screens and flashing lights that have come to be expected from arena shows.

The bare-bones set-up provided nothing to hide behind. But as he performed his first few songs – starting with material from his album ASTROWORLD – he proved he didn’t need any additional help in cranking the arena’s energy up to 100. The high-octane crowd screamed as they tried to throw clothes and handmade signs over the rows of security guards that lined both stages.

Seemingly happy with the city’s acceptance of him, Travis made it clear his ties to Toronto run deep. He brought out local rappers NAV and Belly to perform with him and even referenced shuttered nightclub the Hoxton before launching into some of his most satisfying hits.

“I want to take it back to when I used to go to the Hoxton when the shows was real small,” he said before performing an a capella rendition of 3500 off Rodeo and fan favourite deep-cut Drugs You Should Try It off Days Before Rodeo.

There was nothing but a mic stand and a stream of blue lights illuminating the stage as he transitioned back to a capella for the ending of Stop Trying To Be God, his voice latching onto the word “god” through a long range of notes that showcased his vocal abilities.

The second half of the concert amped up the production value. A larger than life mesh curtain dropped from the ceiling to cover the length of the arena with various AstroWorld insignia, including cartoon rocket ships, planets, rollercoasters and a glowing blue map of Texas. There was also a life-sized rollercoaster that airlifted Travis across the stadium while he performed the AstroWorld hits 5% TINT and Can’t Say.

He finished the show alongside a gargantuan golden statue of his head – modeled after the AstroWorld album art by artist David LaChapelle – that grew from the floor as he performed the viral sensation Sicko Mode. Drake wasn’t there to perform his verses, but Travis didn’t miss a beat, rapping every word of Drake’s lyrics without the Six God as fireworks and flames erupted from the stage.

Thousands of kilometers away from Houston, Travis brought the magic of AstroWorld back to life in Toronto.