NOW MagazineMusicConcert reviewsReview: Shawn Mendes is a pop star from a simpler time

Review: Shawn Mendes is a pop star from a simpler time 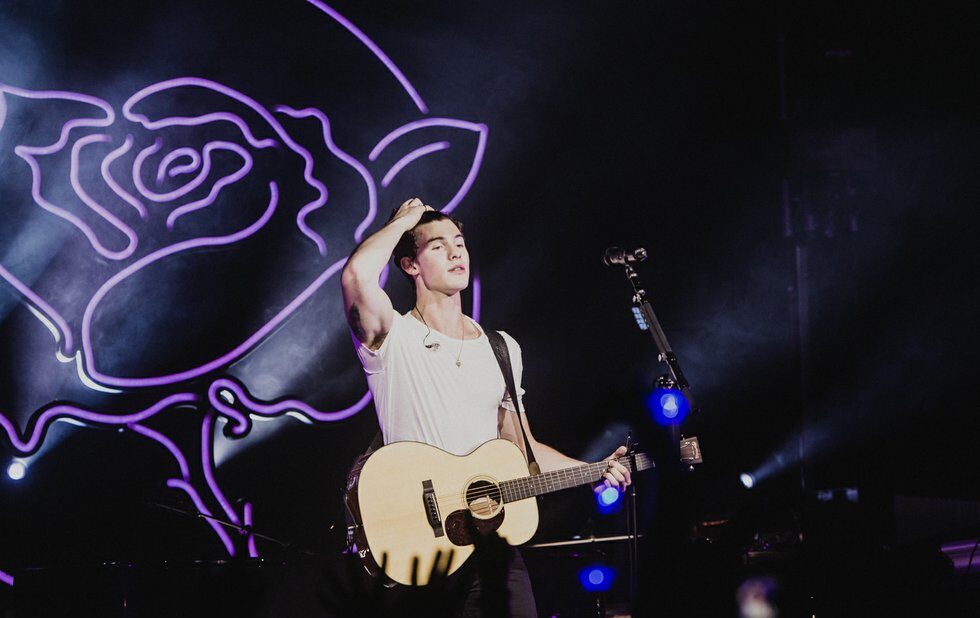 This was the direct message I got this morning from a friend of mine on an Instagram story I posted from Shawn Mendes’s iHeartRadio Secret Session. With the neon-lit silhouette of a rose behind him, the Pickering-raised pop singer opened with Lost In Japan, a slice of blue-eyed soul off his self-titled third album, which dropped in May.

Carried by a fat slinky bass, this song could have been featured on Phoenix’s first album. Indeed, if any pop prince today can deliver the earnest romanticism of a touring musician (“I’m a couple miles from Japan, and I was thinking I could fly to your hotel tonight”) alongside the expected frisson of sexual tension (“We could cut it with a knife”), it’s our boy Shawn.

Though he’s well on his way to arenas, this Monday evening concert at the cozy Mod Club was attended by a mix of five hundred-ish CHUM FM and Virgin Radio contest winners, Mendes adjacents (like a pair of young women who know Shawn’s photographer, or a pair of teens who were “close family friends” of the manager) and industry insiders – “the whole Bell  Media family is here,” remarked a publicist when I asked who was the largest industry contingency representing.

Simulcast live on iHeartRadio.ca as well as on the dial via CHUM FM and Virgin Radio, it was a confident, muscular 40-minute set that seemed old hat for the seasoned 19-year-old. After all, the former Vine star has bigger fish to fry: a summer international arena tour and an Urban Outfitters tour merchandise line. To channel Ferris Bueller, life is moving fast Mendes, and if you don’t stop and look around at this club audience, you could miss it. 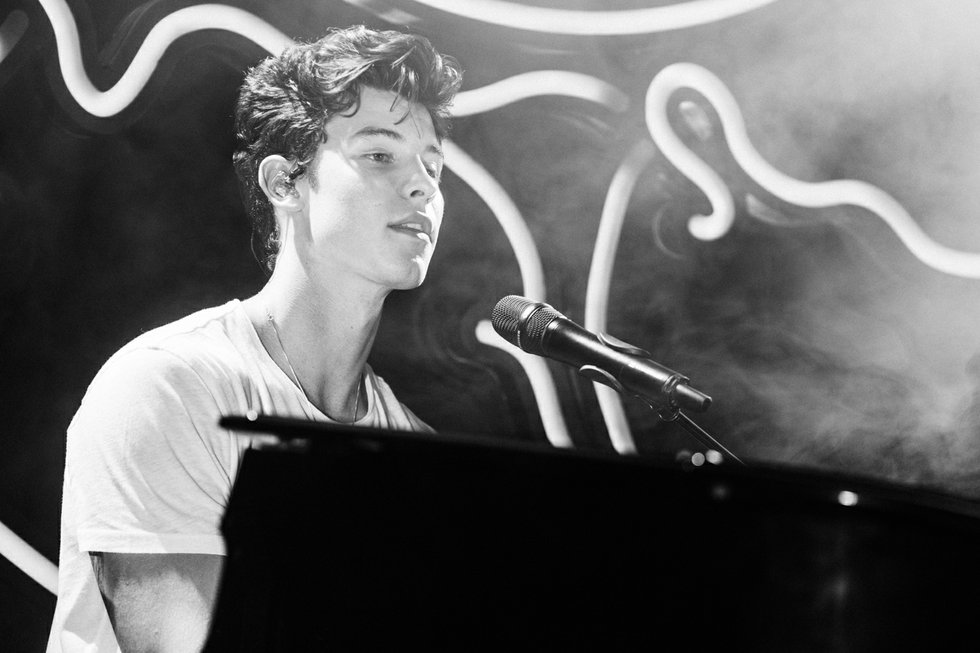 Mendes is a throwback to the kind of pop prince that might have existed back when Total Request Live reigned, and the show also felt like a bit of a relic. “He’s like a leftover relic of that Disney Channel era when they were still wearing purity rings,” explains Vulture editor Dee Lockett. “Mysterious” but “also a little boring.” Like his rival for the summer 2018 pop prince title, Charlie Puth – whose Voicenotes plays things a bit less safe than Mendes’ full-length, and thus fares better – he connects with his dedication to evincing genuine musical chops. He played three guitars during the set, and stepped behind a baby grand for one of the songs – clearly, the record label had budget to splash on this performance.

Julia Michaels, the hitmaking singer/songwriter, not to mention current Mendes collaborator, was the opener, and then later returned to play their duet Like To Be You. Given that they’re both signed to Universal subsidiaries, there was definitely corporate synergies at play. 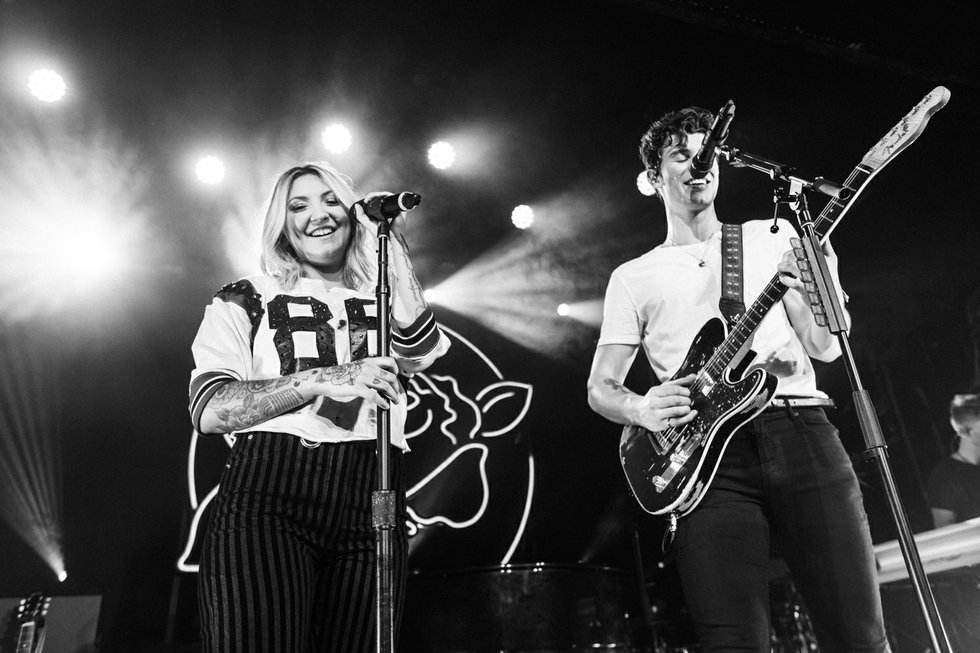 There was nary any presence of Apple or Spotify, and it felt like a throwback to an early industry era where labels weren’t competing with Apple or Tidal for exclusives.

And judging by the fans I met at the concert, it seemed like I wasn’t the only one feeling a nostalgia for a simpler time. Compared to Camila Cabello, Shawn is clearly an act that brings out both daughters still young enough to not be embarrassed by being seen at a show with their parentals and young women in jumpsuits and cat-eared headbands (the new floral crown!) unafraid to knock back colourful cocktails.

On the concert floor, I met nine-year-old Tessa Dekrupff and her mother, Lorena. Driving in from Newmarket, the pair won tickets a few weeks ago to the showcase through Chum FM. Lorena, 48 years old, credits Tessa for keeping her up to date on music — they had previously attended iHeartRadio’s Jingle Ball last winter headlined by Kelly Clarkson, Backstreet Boys, Cardi B and Post Malone, among others. “He seems to have his head on right,” Lorena says of Mendes. “He’s a positive influence.”

Watching Mendes cycle through his burgeoning greatest hits package with a drummer, bassist and lead guitarist – cue up top tracks like There’s Nothing Holdin’ Me Back, Mercy and latest single In My Blood, all of which had the crowd singing along to – he generated enough moments to suffice the six Instagram Stories an MTV Fora journalist I met on the balcony had to log. Further, he also fulfilled the livecasting needs for the two teen adjacents I met who shared flat-ironed long hair with perfect centre parts that threw me back to the late 90s. One shyly showed me her Mendes lock screen, professing her six months of stanning, and proudly declared that she was flying to Winnipeg for one of his four upcoming Canadian dates. (Strangely, this Secret Session in the only Toronto date.)

While we all got to spend time in this pop bubble of the past and present, which promptly ended after 40 minutes, early enough still for the 905ers to get the kids home at a reasonable hour, or the girls to move their cocktails outside to a College street patio. On the walk home, a black SUV with tinted windows zipped past on Shaw.

“It was him!” squealed a young fan, breathlessly jogging towards a friend on College. “We just missed him.” I don’t know if Mendes is destined to stardom, or if his appeal to me is because he looks like a Chris Isaak awaiting his Herb Ritts moment. (I’ll give him a pass until the fourth album.) But if the industry push has anything to say about it, the Mod Club Theatre fans won’t be able to see him like this again for a long time. 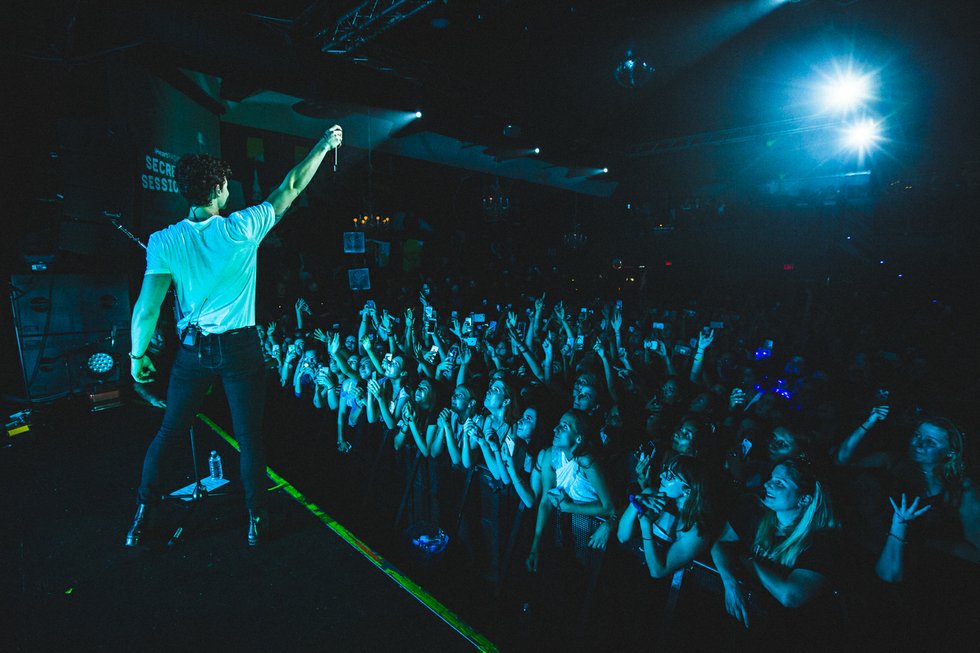 Correction: June 19, 2018 An earlier version of this article stated that the show featured a special Snapchat feature sponsored by Pandora Radio when in fact it was PANDORA jewellery. This version has been updated.