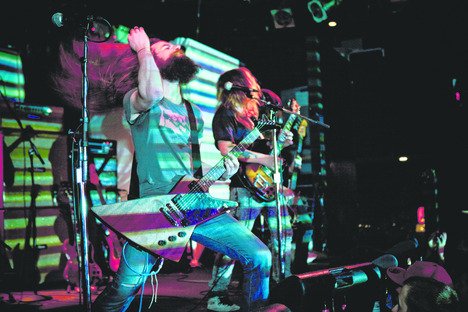 It’s a miracle that notorious party animal Andre Williams is not only still alive and rocking clubs well into his 70s, but that he’s managed to become dirtier and sleazier with age. Backed by local garage-country icons the Sadies, the godfather of R&B-punk took the stage to thunderous applause, flanked by burlesque dancers and wearing a bright red zoot suit and fedora like a caricature of a 1950s pimp.

Williams is an undeniably entertaining performer, but his appeal lies more in his persona than his musical skills. Never a particularly strong singer, his vocals are now closer to a bark than a roar. His age doesn’t allow him to strut around the stage too much, but he can still pull out moves when he needs to.

Though no longer at the top of his game, he’s still capable of putting on a good show, especially when backed by the great Sadies.

YOU SAY PARTY! WE SAY DIE! with LITTLE GIRLS and THINK ABOUT LIFE at the Phoenix Rating: NNNN

Whether it’s because of their enthusiasm for playing live or simply the result of years of touring, You Say Party! We Say Die! were polished, concise and energetic, their sound filling up the Phoenix nicely. The dance-punk five-piece was clearly intent on pleasing both new and old fans, playing songs that spanned their three-album catalogue.

The Vancouverites seemed fuelled by something bigger than themselves. The air in the room was downright electric – especially on Laura Palmer’s Prom from their new album. And they had loads of stage presence. Lead singer Becky Ninkovic’s guttural voice and between-song ad libs were as engrossing as her surreal spacewoman/acrobat-inspired outfit. Strong opening sets by Little Girls and Think About Life complemented YSP’s heartfelt performance.

On a stage packed with towering guitar stacks, Montreal’s Priestess rocked out high-energy, riff-charged, VERY LOUD tunes mostly from their new album. You can tell they’ve been on tour for the last couple of weeks. No signs of exhaustion, just locked-in execution, pummelling power and impressive hair-whipping, especially by bassist Mike Dyball and guitarist Dan Watchorn, who look the same. Singer Mikey Heppner gives off a friendly, nice-guy vibe, and the back-wall projections added visual drama (although everybody’s using them these days).

Matthew Dear gets as much love from rock critics for his experimental pop as from DJs for his club-friendly techno, yet he never seems to fit into either world. When he’s doing the band thing, clubbers at the back of the room whine about the lack of beats to dance to, and when he’s doing the techno thing as Audion (as he was at Footwork), indie kids grumble about the inherent cheesiness of after-hours dance parties and the crowds that frequent them.

But this is why he’s successful. By not giving anyone exactly what they want, everyone enjoys at least some aspects of what he’s doing. At Footwork, it’s tough to say which side won out. He was too experimental and weird to completely please the mainstream partiers, and too pounding and driving to give the music nerds the brain-dance workout they craved.

That said, what’s middle-of-the-road for Dear is still miles ahead of most of his competition, and you definitely had a good time if you kept your mind open.