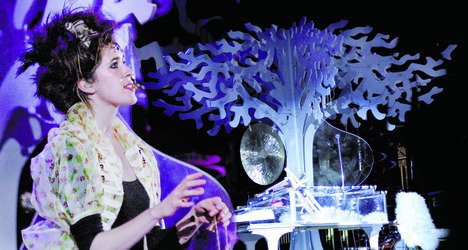 Imogen Heap gets theatrical at the Queen Elizabeth Theatre Thursday. Photo by Paul Till

After opening with his GN’R homage, In The Jungle, D-Sisive – the self-proclaimed “fat, white, middle-class rapper” – dove into an engrossing set aided by Saskatchewan-via-Toronto transplant Mune$hine. Playing mostly material from his new album, Jonestown, the Toronto rapper also found time to revisit older songs from The Book and Let The Children Die.

Though he seemed a little drunk – evidenced by a couple of fumbled lines – D-Sisive laughed off his missteps with an onstage charm that comes from years of working the nightclub circuit. Most surprising was the amount of “serious” material he performed, and how well it translated. Tracks like Laundry Room and the suicide-focused One Way Ticket brought a cold chill into the Drake Underground, yet the crowd was receptive, prompting D-sisive to say, “Wow, it’s weird to hear you guys singing along with me.”

With so much discussion about Imogen Heap’s embrace of Twitter, vlogging and various other innovatively tech ways through which she interacts with fans, questions about whether her new album, Ellipse, is any good seemed insignificant. Could the British musician with an enormous online presence deliver in reality?

As it turns out, Heap has the soaring vocals of a modern-day Kate Bush and is far from a mousy Internet addict. She moved across the eccentrically decorated stage (picture a transparent piano under a tree) with total confidence, and her between-song banter was Emma Thompson-level charming. She even wears a headpiece mic, giving her nothing to hide behind when singing and dancing at centre stage.

And thanks to her online ways, Heap enjoys an intense relationship with her fans. Squeals met her announcements of new tunes like Bad Body Double and Aha! Cameras flashed relentlessly, subsiding only when Heap conducted an impressive audience participation choral part in Just For Now that resulted in a very Mr. Holland’s Opus moment.

THE RACOON WEDDING and GERMANS at the Garrison Rating: NNN

Brantford’s the Racoon Wedding and Toronto’s Germans are indie rock bands with tons of promise, but neither lived up to their potential on Saturday night. Though nobody fell flat on their face, it was tough to shake the feeling that they’re capable of more.

The Racoon Wedding sound like a bunch of young punks who recently discovered their parents’ CCR records. When their music works, it’s charmingly shambling and passionate. Though their live energy is contagious, the songs themselves are crammed with so many ideas that the hooks get buried.

Germans were much more concise and focused. At times they brought to mind Broken Social Scene attempting dance rock, which isn’t a bad formula. Unfortunately, their songs lacked variety and after a while started to blend together.

Toronto’s dubstep scene blew up in the last year, but back in the UK many have already moved on to the next new club sound (currently called “funky,” which may be an all-time low for dance-music genre names). So while we were getting excited for pummelling bass lines and half-time beats, people across the pond had written off dubstep as too macho and undanceable.

These factors have created a perfect storm for hyped-up young Bristol producer Joker. Unlike many of his dubstep contemporaries, Joker has a highly developed sense of melody and an interest in writing real songs (as opposed to cranking out DJ tools). His music is still heavy enough to please the dudes in baseball caps, but it’s got soul and sex appeal, too – important elements if he wants to be heard beyond the genre’s core fan base.

As a DJ, he played mostly his own creations, which were exactly what the crowd wanted. As a bonus, he got creative behind the turntables, a nice change from producers who can barely mix. If this is the future of dubstep, sign us up.