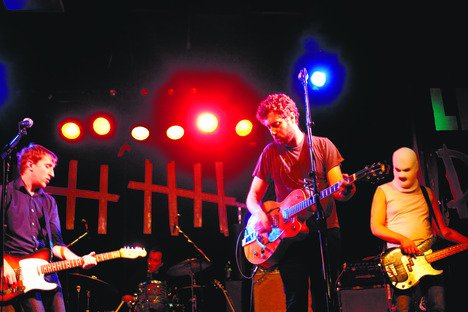 Despite the fact that he was discovered in Toronto in the early 70s, enigmatic cult performer Leon Redbone rarely comes through town any more, so his three-night stand at Hugh’s Room was highly anticipated.

Since his shtick has changed very little over the last 30-something years, he’s had time to perfect his oddball mix of vaudeville, early blues and Tin Pan Alley standards. Given his lazy mumble of a singing voice and penchant for relaxing in a chair onstage, it’s easy to forget how musically athletic he is, effortlessly dropping lightning-fast guitar lines into his soft strumming. And his repertoire of vocal tricks and quirks has grown with time.

When so many touring legends struggle to live up to past glories, it’s refreshing to catch one who’s improved with age. If you’re kicking yourself for missing it, take comfort in the fact that a camera crew recorded the show for a future DVD.

Christmas came early for Constantines fans. On night one of their three-night celebratory stand, the quintet took the stage with their usual understated modesty (save for stylish bassist Dallas Wehrle, who donned a white balaclava) in front of large tally marks symbolizing their 10 years together.

As they burst into Young Lions, their big grins made it obvious that they were enjoying themselves as much as the crowd. The relaxed atmosphere, and the fact that they’d dusted off old tunes, made for great moments, including a touching version of On To You, the Weakerthans’ John K. Samson adding vocals on Little Instruments, and singer Bry Webb laughing after accidentally rearranging the verses to Shine A Light.

The second night saw the band anticipate repeat visits and consequently switch things up. Added to the set list were The Long Distance Four, Insectivora and National Hum. The standout both nights was Trans Canada from their latest album, Kensington Heights. The band nailed its sinister groove, and the beautiful, reeling comedown coda was so good it gave me shivers.

If you missed out, the Cons have one anniversary show left, Saturday (December 19).

Four years running and still going strong, Goin’ Steady is one of T.O.’s more unlikely dance party success stories. Sure, retro nights in general tend to attract crowds, but it’s still bewildering to watch a sea of 20-somethings go crazy for 50s sock hop hits recorded before their parents were even born.

In many ways, it’s this up-for-it crowd that makes the monthly party. The music is fine and all, but the Goin’ Steady DJs – Matt Cully and Louis Calabro – tend to favour the big hits, making it feel a bit like a live-to-air party thrown by an oldies radio station. Toward the latter half of the night, though, they brought out greasy 50s R&B rarities. You’d have to be a snob to deny the fact that this shindig is a hell of a lot of fun.

Texas hardcore/thrash/metal group Iron Age played a short, powerful set that had the crowd at Siesta Nouveaux going absolutely nuts. The group’s dark, driving sound lent the small venue a creepy ambience, while the intensity of the mosh pit visibly frightened a few of the uninitiated.

Lead singer Jason Tarpey’s unearthly growl took a back seat only to his fist-pumping stage presence, and the group’s high level of musicianship translated well live. Full-throttle bands like this often miss chords and drum strikes, but they kept things clean, playing cuts primarily from their latest album, The Sleeping Eye, and closing with Dispossessed, one of their strongest tracks.

The one drawback was the short set length. Here’s hoping Iron Age have more songs (and another album) under their belt next time they visit.