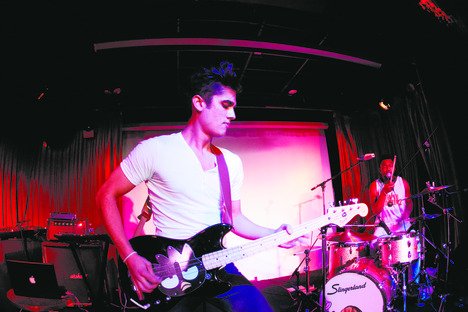 STYROFOAM ONES, CARPS and 84.85 at the Drake Rating: NNNN

At the Drake, Styrofoam Ones proved why their shape-shifting dance-punk is such a hot commodity: they covered Ginuwine’s Pony with surprising flair, Alexander The’s sharp, idiosyncratic voice had the crowd going crazy at a sober hour, and their matching outfits were just so damn twee.

The Carps, who may be Toronto’s best two-piece rock outfit since DFA 1979, put on a balls-out performance. Drummer Jahmal Tonge played with such conviction that his sticks looked ready to fly out of his hands. Porgie & Bess (Big Booty Girls) was an especially big hit with the women in the audience.

Though rap and electro generally synthesize like salt water and crude oil, 84.85’s performance was bang-on. They haven’t performed in months, yet MC Cass didn’t stutter once, and DJ Lucy ‘Lo, with his house-music-style of mixing records, wove a cohesive, pause-free backdrop.

Ever since party promoters AD/D called it quits last summer after a long, successful run of big, hipster dance parties, their presence has been missed. They brought electro-influenced sounds into the big rooms, but also injected glamour and glitter into the scene by encouraging club kids to bring back outlandish costumes.

This latter feature was revisited Tuesday at the Cosmic Club, where a new monthly party hosted by AD/D’s female half, Eve Fiorillo, kicked off in the space above the Lavish & Squalor boutique. Instead of big-name touring DJs, it featured locals DJ Barbi and Filthy Gorgeous playing futuristic disco for a glammed-up crowd in an intimate, exclusive spot.

Too bad liquor laws cut the bar off at 1 am, when things were just heating up. Still, it reminded us that a good party depends on more than famous acts in huge clubs. Just as important are the crowd, the ambience and, of course, the music, which our locals often do better.

BISHOP MOROCCO and DVAS at the Garrison Rating: NNN

The Garrison may have been sold out long in advance of the Shit La Merde NYE party, but you wouldn’t have guessed that from the small crowd on hand for Bishop Morocco’s opening set. Too bad, since the gloomy, reverb-drenched pop band is really coming into its own, even if the melancholy mood they create didn’t entirely suit the occasion.

The club was entering party mode by the time DVAS hit the stage, but the band fought an uphill battle to get the dance floor worked up. Their house music reworking of soft rock is generally a crowd-pleaser, though it didn’t go over as well before midnight as it usually does in the wee hours. They make good headliners but come across as too over-the-top as openers.

DJs Dougie Boom and Shit La Merde finally got the dance party started, but those of us who’d been there from the beginning were already fading. That’s the problem with booking live acts alongside DJs at a NYE event – the live entertainment can come across as a warm-up to the actual party, which isn’t the best way for talented local bands to prove their worth.