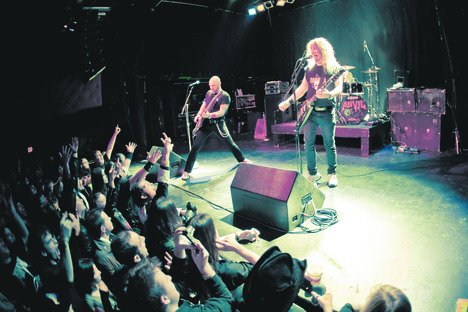 Toronto indie rock icon Ian Blurton has been circulating CDRs of a new solo album, Happy Endings, which sees him expanding his rock roots to include trippy experimental sounds, Stones-influenced blues grooves and even disco rock. The recording features a number of special guests, so he’s teamed up with Hamilton’s Huron to reinterpret the material live.

Huron began the night without Blurton, playing a set of their own tunes. Think stoner-friendly classic rock with occasional touches of country. They’re a good band, but didn’t really shine until they teamed up with Blurton later in the night. Impressively versatile musicians, they easily adapted to the tangents Blurton chases in his new songs, and gave the eclectic material a more consistent sonic fingerprint. 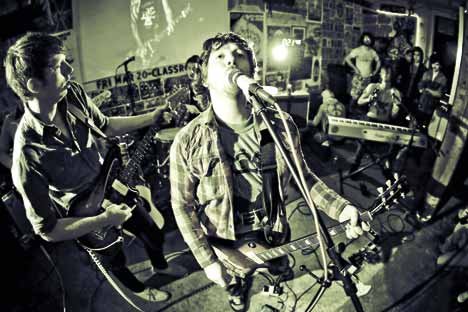 Ride the Tiger opened their set with a great rendition of Bobby Bland’s Ain’t No Love In The Heart Of The City and confidently propelled themselves through an hour of soul covers. The band – whose roster rotates fairly regularly – mixed the tunes into one another the way a DJ does, with no clear starts or ends (a suitable approach considering The In Crowd night’s Motown/funk/northern soul theme).

The band’s subtle guitar, saxophone and kick-drum variations on the classics kept the tunes engaging, though the dance floor probably would’ve been just as satisfied if Ride the Tiger had played the tunes note for note. Still, it was refreshing to see this type of music approached with respect instead of being straight-up appropriated, as often happens at “throwback” parties.

ANVIL at the Phoenix Rating: NNNN

Most of us have a soft spot for underdog success stories, so it was no surprise that Toronto’s Anvil – whose 30-year struggle in heavy metal was tracked in the hit 2008 documentary Anvil! The Story Of Anvil – took the Phoenix stage to chants of “AnVIL, AnVIL, AnVIL.”

It surprised the band members, though, who’ve clearly grown accustomed to Toronto not giving a shit. Guitarist/singer Steve “Lips” Kudlow, who looks permanently stupefied, shook his head in disbelief and quipped, “At least you’re not yelling for Advil.”

It was also fun to see veteran fan Colin “Mad Dog” Brown get onstage and drink beer through his nostril.

DERRICK MAY at Footwork Rating: NNN

Techno wouldn’t exist if it weren’t for the pioneering work of Detroit’s Derrick May. His Transmat record label was quiet for most of the 00s, but a new release by Toronto’s Greg Gow recently supplied a good excuse to check out the legend spinning records at Footwork.

May is always fun to watch. He’s aggressive behind the mixing board and has a large repertoire of crowd-pleasing techniques. Most of what he spins can be called “techno,” but it’s not the mindless, pounding kind many associate with the genre. An undercurrent of melancholy soulfulness ties his selections together no matter which decade the original records were released.

Compared to most of today’s dance music DJs, May is really fucking good at what he does. But compared to his past sets over the years, we couldn’t help but notice a lack of what-the-fuck memorable moments. A solid night of good music, but we know he can do better.